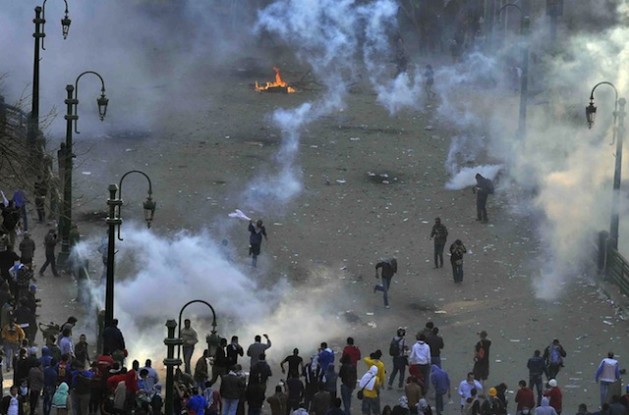 Since the two-year anniversary of the January 25 Revolution, Egypt has seen numerous clashes between anti-government demonstrators and security forces.Credit: Khaled Moussa al-Omrani/IPS.

CAIRO, Feb 17 2013 (IPS) - Since the second anniversary of the uprising that ended the Mubarak regime, Egypt has witnessed a spate of political violence. Egypt’s opposition led by the high-profile National Salvation Front (NSF) blames President Mohamed Morsi for the bloodshed, but many blame the NSF and its leaders.

“The NSF’s slowness in condemning recent violence has made it appear to the public as if it were condoning – even inciting – acts of violence and sabotage,” Amr Hashim Rabie, senior analyst at the Cairo-based Al-Ahram Centre for Political and Strategic Studies told IPS.

Egypt’s non-Islamist opposition, he added, “may pay the price for this perception in upcoming parliamentary elections.”

The second anniversary of Egypt’s Jan. 25 Revolution and its aftermath have been accompanied by outbreaks of violence across the country. NSF-led rallies and marches have led to numerous clashes between anti-government protesters and police that have so far left more than 50 dead, including security personnel.

In recent months, the NSF – a loose coalition of opposition parties and groups headed by Amr Moussa, Hamdeen Sabbahi (both of whom lost to Morsi in presidential polls last summer) and Mohamed ElBaradei – has taken the lead in articulating the demands of Egypt’s non-Islamist opposition. These demands include amendment of Egypt’s new constitution, the appointment of a new government, and the dismissal of a Morsi-appointed prosecutor-general.

Opposition spokesmen have been quick to blame President Morsi for the recent bloodshed, along with the Muslim Brotherhood group from which he hails. But according to Rabie, most of the public – weary after months of political turmoil – holds the NSF-led opposition directly responsible for much of the ongoing violence and mayhem.

“Recent opinion polls show that most Egyptians blame the NSF for sowing chaos and inciting bloodshed, damaging property both public and private, and hurting the economy by damaging Egypt’s already-reeling tourism industry,” he said.

Rabie attributed this perception to failures by the NSF to speedily condemn recent acts of violence and sabotage. “The NSF has been woefully slow in distancing itself from violent acts because it hasn’t wanted to alienate the non-peaceful activists who answered its calls for anti-government rallies.”

“I had been planning to vote against the Brotherhood in upcoming parliamentary polls, but given the opposition’s recent aggressive behaviour, I’m going to give my vote to the Brotherhood candidate,” said Karim, a 39-year-old Cairo physician who preferred not to give his last name.

Ahmed Kamel, spokesman for Amr Moussa (head of the liberal Conference Party and leading NSF member), rejected the notion that the public blamed the NSF for bloodshed.

Describing recent opinion polls to this effect as “unscientific,” Kamel told IPS: “The NSF did not call for or incite any of the recent violence, at the presidential palace or elsewhere. The NSF simply voices the people’s demands.”

But if the NSF wants to speak for people, “it should focus on electoral campaigning with a view to winning a majority in parliament,” said Azab Mustafa, prominent member of both the Brotherhood and its Freedom and Justice Party (FJP). “Until then, it can’t claim to speak on behalf of ‘the people’.”

Mustafa added: “The NSF should be trying to win over voters instead of calling for endless, potentially-violent demonstrations, which only serve to hurt the economy and give western critics a chance to say Egypt ‘isn’t ready for democracy’.”

Kamel, for his part, responded by saying that the NSF was “more than ready” to contest elections as long as the polling was subject to “complete judicial and international oversight” and the Brotherhood “reveals all the sources of its campaign funding.”

Recent political violence has also featured attacks on Brotherhood/FJP offices and on those of Brotherhood-affiliated government officials, garnering for the group and its party a measure of public sympathy. NSF-led rallies and marches, meanwhile, have frequently targeted the presidential palace, which during one recent demonstration was struck with a petrol bomb.

“Protesters have the right to demonstrate peacefully in public areas,” said the Brotherhood’s Mustafa. “But most of the recent NSF-led marches in Cairo have specifically targeted the presidential palace, which Egyptian security forces are duty-bound to protect, and all these have inevitably ended in violence.”

According to Rabie, the months-long conflict between the NSF-led opposition and the presidency has seen three major battles for public opinion.

The first over Morsi’s controversial November decree overriding the judiciary, and the second over December’s contentious constitutional referendu. These were, said Rabie, “both won by the opposition, with which much of the public sympathised.”

But, he added, the presidency and the Brotherhood appear to have won the third round. “The NSF has succeeded in mobilising mass anti-Morsi rallies and marches, but the Brotherhood has won in terms of broad public sympathy, which could translate into electoral gains.”

According to official statements, parliamentary elections are likely to be held in April or May.

Egypt’s first post-Mubarak parliamentary polls in late 2011 were swept by Islamist parties, chief among them the Brotherhood. The assembly was dissolved last summer on orders of the ruling military then, after Egypt’s High Constitutional Court ruled it illegitimate on a technicality.

This time around, Rabie expects Islamist parties to capture a smaller share than they did in 2011, when together they won almost three-quarters of parliament’s lower house. “But due to its superior organisation and electoral experience, especially in the case of the Brotherhood, the Islamist camp will likely maintain a parliamentary majority,” he said.

“And if the NSF-led opposition maintains its current strategy of staging rallies that lead to clashes with police and impeding public transportation,” Rabie added, “it will pay a heavy price at the ballot box.”