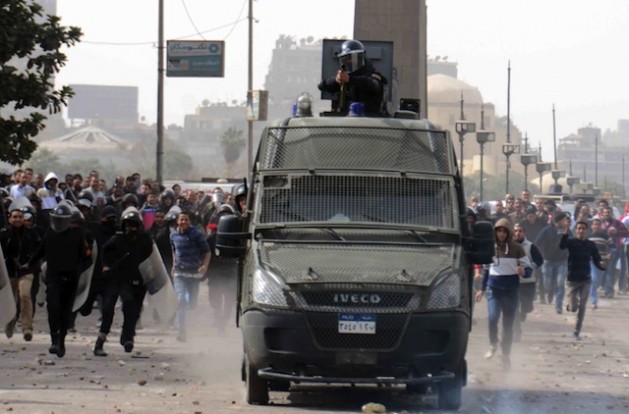 CAIRO, Jan 29 2013 (IPS) - Concerns are mounting over Egypt’s future after the outbreaks of violence that marked the second anniversary of Egypt’s January 25 Revolution. Massive anti-government rallies led to ongoing clashes between protesters and security forces that have left at least 40 people dead. Cities along Egypt’s Suez Canal faced a government-declared state of emergency.

“The revolutionary fervour that erupted on Friday in ten out of Egypt’s 27 provinces has not been seen since the uprising two years ago,” Ahmed Maher, general coordinator of Egypt’s 6 April youth movement, which participated in the anti-government demonstrations, told IPS.

In the weeks leading up to the anniversary, revolutionary, liberal and leftist parties and groups called on Egyptians to mark the occasion with nationwide protests against President Mohamed Morsi and the Muslim Brotherhood from which he hails. Hundreds of thousands answered the call on Friday, joining marches and rallies in Cairo, Alexandria and other major urban centres.

Protesters’ demands included the amendment of Egypt’s newly approved constitution, prosecution of anyone implicated in killing protesters, and guarantees that upcoming parliamentary polls – expected in April – would be conducted transparently. Protesters also voiced opposition to the perceived ‘Brotherhoodisation’ of state institutions.

Although protest organisers had called for “peaceful rallies” and “the avoidance of violence,” this was not to be the case.

Saad al-Kitatni, president of the Muslim Brotherhood’s Freedom and Justice Party (FJP), blamed opposition political forces for the escalating violence. “The political forces that called for these rallies, of which they appear to have lost control, are responsible for the bloodshed,” he declared via Twitter.

Opposition figures, for their part, were quick to blame the crisis on President Morsi and the Muslim Brotherhood. “Morsi, his administration and the FJP are all responsible for the current violence,” said 6 April’s Maher. “By ignoring the demands of the opposition, Morsi is behaving just like Mubarak.”

The Muslim Brotherhood condemned the violence. “Egypt’s January 25 Revolution was peaceful in nature,” the group stated. “But yesterday’s demonstrations included attacks by armies of thugs on police, state institutions and private property.”

The Brotherhood blamed Egypt’s private media, much of which is owned by influential businessmen known for their antipathies towards the Islamist group, for “inciting the public against Egypt’s elected government.” It went on to assert that violence had been planned in advance by “elements seeking to derail the course of the revolution.”

The group also condemned opposition groups for condoning the violence. “It is unacceptable that those demanding ‘justice for the martyrs of the revolution’ engage in actions that lead to more people dying,” the statement read.

The situation became even more explosive on Saturday morning when a court sentenced 21 men from Port Said to death. The men had been charged with responsibility for last February’s Port Said stadium disaster in which scores of Egyptian football fans were killed.

Upon announcement of the sentences, clashes erupted in Port Said between police and families of the condemned men. At least 30 were killed in the ensuing violence, including some security personnel. Soon afterwards, the military began deploying in and around the city of Port Said.

On the same day, the National Salvation Front (NSF) – Egypt’s main opposition umbrella group – upped the ante, threatening to boycott upcoming parliamentary polls if President Morsi failed to meet a shortlist of demands. These include immediate constitutional changes, replacement of the current government with a ‘national salvation’ government, and the dismissal of Morsi-appointed prosecutor-general Talaat Ibrahim.

If these demands weren’t immediately met, the NSF said, it would stage further demonstrations this week to call for the re-activation of Egypt’s previous 1971 constitution (albeit with some modifications), and snap presidential elections.

According to Maher, Morsi’s only way out of the current crisis is to “form a new government drawn from various political forces and constitution-amending committee comprised of scholars; dissolve the Shura Council (the upper house of Egypt’s parliament currently endowed with legislative powers); and accept the resignation of the prosecutor-general.

“If he fails to do this, we will escalate our demands,” he added, in a veiled reference to possible calls for Morsi himself – elected only seven months ago – to step down.

FJP spokesman Murad Ali rejected such ultimatums. “The opposition has the right to demonstrate – peacefully – anywhere it wants to,” he told IPS. “But no political group has the right to demand the democratically elected president’s ouster, while the use violence is of course a red line.” (END)