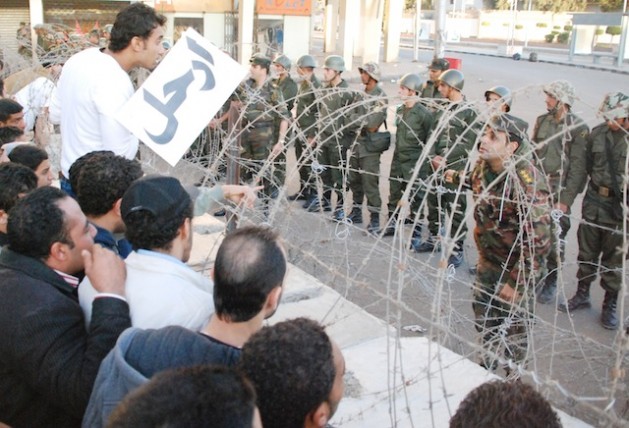 CAIRO, Dec 13 2012 (IPS) - This Saturday, Egyptians will head to the polls to vote on a controversial draft constitution. The referendum has divided this nation – still pulsing with the revolutionary fervour that toppled former dictator Hosni Mubarak in early 2011 – with most Islamist parties and groups supporting the proposed national charter, while liberal, leftist and ‘revolutionary’ groups, in addition to Egypt’s sizable pro-Mubarak demographic, are opposed to it.

“The crisis over Egypt’s post-revolution constitution has led to unprecedented degrees of polarisation, which has already (sparked) violence,” prominent political analyst Tawfiq Ghanem told IPS. “It’s very precarious. Both camps are able to mobilise vast numbers, which has allowed both sides to claim popular legitimacy.”

Tuesday saw competing mass rallies in Cairo: one in support of the draft constitution, and another, held outside the presidential palace, at which protesters demanded the referendum be postponed. Both demonstrations drew tens of thousands.

Opponents of the proposed constitution say the document doesn’t do enough to curb presidential powers and guarantee personal freedoms. They also complain that the 100-member constituent assembly that drafted the charter was dominated by Islamist-leaning members.

“Egypt’s earlier (1971) constitution was much better than the document that will be put to a vote this Saturday,” Gaber Gad Nassar, constitutional law professor and former constituent assembly member, told IPS. “The draft charter fails to reflect the demands of last year’s popular uprising, which ended 30 years of corruption and dictatorship” under the now-deposed president Hosni Mubarak.

Last month, Nassar – along with most other non-Islamist members – quit the assembly to object to what they saw as ‘Islamist domination’ of the charter-drafting body. Seemingly unfazed, remaining members – roughly two thirds of the assembly – approved the final draft constitution following a 20-hour marathon session.

“I left the assembly to protest draft articles concerning the president’s powers, as well as last-minute changes made to articles relating to civil liberties,” said Nassar. “I also objected to how the Islamist members who dominated the assembly had ignored proposals put forward by non-Islamist members.”

Magdi Hussein, a prominent Islamist-leaning political analyst, defends the draft, saying that non-Islamist members withdrew en masse, just before a final assembly vote on the document, in order to derail the drafting process.

“Besides, there can never be total consensus on any constitution anywhere in the world,” Hussein told IPS. “A certain degree of dissent is inevitable.”

“The only way out of the current crisis (that will also) realise the goals of last year’s revolution – namely, democratic transition – is to put the proposed constitution to a popular vote,” he added. “The opposition is welcome to vote ‘no’ if it wants to.”

If more than half of Egypt’s registered voters vote ‘yes,’ fresh parliamentary elections will be held within 60 days. If the draft is rejected, a new constituent assembly will be drawn up – members of which will be selected via direct elections – and tasked with drafting a brand new charter within six months.

On Dec. 8, President Mohamed Mursi – who, along with the Muslim Brotherhood group from which he hails, supports the draft charter – called on the opposition to list the draft articles they found objectionable. He went on to promise that said articles would be raised for discussion in the next parliament’s opening session.

On the same day, Mursi – despite opposition demands that the referendum be delayed – issued a presidential decree stating that the poll would go ahead as scheduled. The decree replaced an earlier, highly controversial Nov. 21 decree that had made the president’s decisions impervious to judicial challenge.

It was this latter decree that triggered the latest crisis, bringing hundreds of thousands onto the streets nationwide to protest the president’s bold move against the judiciary.

Mursi’s critics portrayed the decree, which also protected the constituent assembly and Shura Council (the parliament’s upper house) from dissolution by court order, as ‘dictatorial’ and a ‘naked power-grab.’

The president’s supporters, however, saw the move as a means of reigning in a hostile judiciary that had served the Mubarak regime, especially Egypt’s High Constitutional Court (HCC). 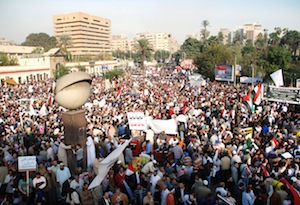 The HCC played a pivotal role in the dissolution this summer of Egypt’s freely-elected People’s Assembly (parliament’s lower house), roughly three quarters of which had been won by Islamist candidates. It was an HCC verdict deeming the elected assembly ‘unconstitutional’ (based on a legal technicality) that allowed Egypt’s then-ruling Supreme Military Council to order its dissolution.

“Mursi and his supporters view the judiciary, especially the HCC, as trying to undermine the president’s decisions at every turn and threatening democratically-elected bodies with dissolution,” said Ghanem, adding that the controversial ‘November 21’ decree “was intended to pre-empt anticipated HCC rulings against the constituent assembly and Shura Council”.

This camp has produced unexpected bedfellows, uniting liberal, leftist and ‘revolutionary’ groups with supporters of the ousted Mubarak regime.

“Ironically, the revolutionaries who got rid of Mubarak are now supported by members of his old party,” ElBaradei himself conceded in a Dec. 3 editorial in the Financial Times.

Mursi supporters, for their part, accuse the NSF of spearheading a “coup” against the elected president’s democratic legitimacy. They see Moussa and Sabbahi as failed presidential contenders who lost to Mursi in fair elections this summer and who now simply want to trip up Egypt’s democratic transition.

“Egypt’s liberal, secular elite has openly thrown in its lot with remnants of the Mubarak regime against Egypt’s democratically-elected president in hopes of derailing the formation of functioning state institutions,” said Hussein. He described the NSF as “counter-revolutionary.”

According to Hussein, the true aim of the opposition’s recent mobilisation against the constitutional poll – which has moved its main protest venue from Tahrir Square to the presidential palace – is nothing less than Mursi’s ouster.

“The political opposition doesn’t want reconciliation,” he said. “They are using the current constitutional crisis to attempt to unseat the elected president.”

The issue has already led to several incidents of violence. At least ten people were killed last week in clashes between supporters and opponents of the president, after the latter surrounded the presidential palace in Cairo.

At around the same time, unknown assailants attacked several of the Muslim Brotherhood’s provincial offices as well as Mursi’s private residence.

“Everyone has the right to peaceful protest to express their views,” said Hussein. “But threatening state institutions, including the presidential palace itself, is totally unacceptable and will simply lead to further chaos and bloodshed.”

He added: “Opposition to the policies of Egypt’s democratically-elected head of state should be settled at the ballot box, be they presidential and parliamentary polls or the upcoming constitutional referendum.”