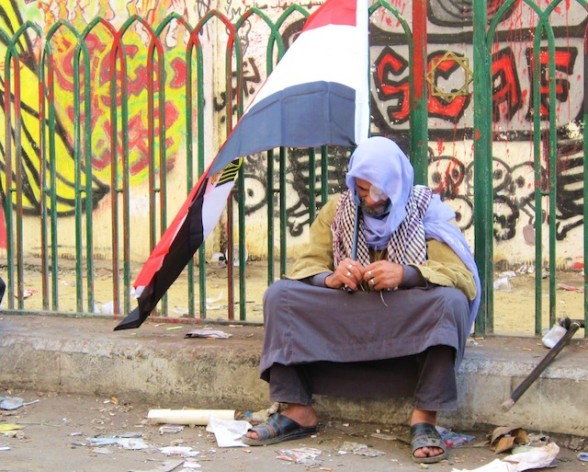 A protester rests during a day of clashes after President Mursi expands his powers. Credit: Cam McGrath/IPS.

CAIRO, Nov 24 2012 (IPS) - When Mohamed Mursi was sworn in as president in June there were concerns that the first democratically elected president in Egyptian history would be subservient to the military council that had ruled the country since dictator Hosni Mubarak was toppled in early 2011.

But by August, Mursi had pulled off a political coup, issuing a decree that purged the military of its leadership and left him in sole control of the government, with full executive and legislative authority. A decree issued Thursday expanded Mursi’s power even further, putting his decisions beyond dispute and neutralising the judiciary that was one of the last institutions challenging his Islamist government.

“Not since the days of the pharaohs has an Egyptian leader amassed so much power,” says Ahmed Hamid, an activist protesting in Cairo’s Tahrir Square. “Even Mubarak never dared to go this far, and you saw what happened to him.”

Mursi’s decision to expand his own powers set off a political firestorm, exposing deep rifts between his supporters – predominantly members of the Muslim Brotherhood and other conservative Islamic groups – and the liberal and secular Egyptians who are his main opponents. Clashes erupted as the rival camps held demonstrations in cities across Egypt on Friday.

In a seven-article declaration, Mursi sacked the Mubarak-era prosecutor general and ordered new investigations and trials of all those accused of killing or injuring protesters since the start of last year’s uprising – a decision that could see Mubarak retried.

More contentiously, he declared the upper house of parliament and the constituent assembly tasked with drafting a new constitution immune from dissolution by any court. The move appears aimed at pre-empting the verdicts of ongoing legal challenges that could see either body declared unconstitutional.

Mursi gave the Islamist-dominated constituent assembly an extra two months to draft a new constitution to replace the one suspended after Mubarak’s ouster. He ordered work to continue despite resignations by almost all of the assembly’s secular and Christian representatives, which have cost it much of its legitimacy.

Presidential spokesman Yasser Ali announced on national television that Mursi’s expanded powers were necessary to “protect the revolution’s gains” and end the stalemate with the judiciary that has stalled Egypt’s democratic transition. He said the presidential decree was aimed at “cleansing state institutions” and “destroying the infrastructure of the former regime.”

Egyptians who fought to bring down Mubarak’s authoritarian regime were particularly alarmed by a clause in the decree that states the president’s decisions cannot be suspended or revoked by any authority. Banners carried by protesters warned that Mursi had become “the new pharaoh.”

“The decree effectively renders presidential decisions final and not subject to the review of judicial authorities, which may mark the return to Mubarak-style presidency, without even the legal cosmetics that the previous regime employed to justify its authoritarian ways,” journalist Hesham Sallam wrote in an op-ed piece.

Mursi also granted himself the authority to take “any measures he sees fit in order to preserve and safeguard the revolution, national unity or national security.”

The clause assigns the president broad and only vaguely defined powers. Some activists drew comparisons to emergency laws under Mubarak that allowed security forces to arbitrarily arrest, torture and imprison political dissidents with impunity.

“Protesting here today against Mursi could be viewed as a ‘threat’ to the revolution or national unity,” says protester Mustafa Abbas, a primary school teacher. “This is a dangerous article that opens the door for witch hunts of the president’s opponents.”

Mursi’s declaration evoked strong reactions across Egypt, filling squares with demonstrators and reviving the spirit and slogans of the uprising last year that toppled Mubarak.

“The people want the downfall of the regime,” protesters chanted in Cairo.

And in a scene reminiscent of the heady days of the revolution, television stations used split screens to cover Friday’s pro- and anti-government rallies. As riot police rained tear gas down on his critics in Tahrir Square, Mursi triumphantly took the stage at a rally organised by the Muslim Brotherhood, claiming the mantle of the revolution.
“I never sought legislative authority and I would never use it to settle scores, but if my people, my nation, or Egypt’s revolution are in danger then I must,” he said.

Hoping to assuage fears, Mursi promised to relinquish his supplementary powers once a new constitution is adopted and a new parliament elected.

Nathan J. Brown, an expert on Egyptian law and politics at George Washington University, interpreted the underlying message: “I, Mursi, am all powerful. And in my first act as being all powerful, I declare myself more powerful still. But don’t worry – it’s just for a little while.” (END)