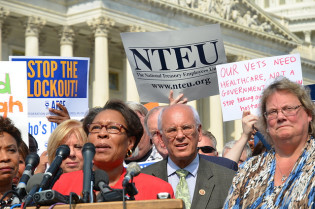 By Ramy Srour
Frustration is mounting with elected representatives here on the fourth day of a U.S. government shutdown that has left nearly 800,000 federal workers temporarily out of work, and advocates across the political spectrum are working to get their voices heard.

By Jim Lobe
Three days into the partial shutdown of the federal government, foreign policy mavens are voicing growing concern about the closure’s impact on U.S. credibility overseas.