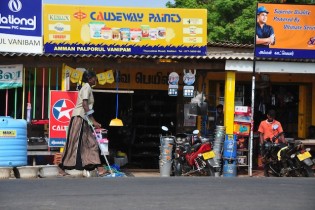 By Amantha Perera
People are willing to wait a long time for a few minutes in the hands of Aloysius Patrickeil, a 32-year-old barber who is part-owner of a small shop close to the northern town of Kilinochchi, 320 km from Sri Lanka’s capital, Colombo.
ADVERTISEMENT ADVERTISEMENT