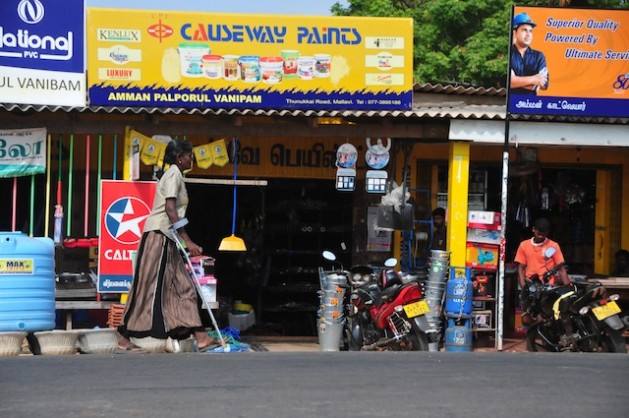 A woman on crutches walks past a row of shops in northern Sri Lanka, where over 110,000 people disabled by war struggle along with very little official assistance. Credit: Amantha Perera

MANNAR, Sri Lanka, Feb 16 2015 (IPS) - It is a hot, steamy day in Sri Lanka’s northwestern Mannar District. Mid-day temperatures are reaching 34 degrees Celsius, and the tarred road is practically melting under the sun.

Sarojini Tangarasa is finding it hard to walk on her one bare foot. Her hands constantly shake and she has to balance on a crutch. “I am just trying to get to my daughter’s house,” she says.

Her destination is just two km away, but it feels like a lifetime to Tangarasa, who cannot afford any form of transport, or even shoes.

Worse was to follow in 2008 when she, her husband and her four children fled the fighting that erupted in the Mannar District between government forces and the Liberation Tigers of Tamil Eelam (LTTE), a guerilla army fighting to carve out a separate state in north-eastern Sri Lanka.

The family would be on the run for almost a year and a half, before spending an equal length of time in a centre for the displaced after the 26-year-long civil war finally ended in May 2009.

Tangarasa was injured in a shell attack in 2008. The head injuries have left her with trembling hands and a slur when she speaks. “It has been hard and it will be the same till I die,” Tangarasa contends, as she slowly recommences her journey, the sun beating mercilessly down on her.

Thousands of miles away, the story of 33-year-old Chandra Bahadur Pun Magar, a former Maoist fighter from the Dang District in southwest Nepal, follows a similar trajectory.

This father of three, including a two-and-a-half-year-old baby girl, lost a leg in a landmine blast in 2002 when he was just 20, four years before the end of the country’s two-decade-long civil war between government armed forces and Maoist guerillas.

Now his biggest worries are how he will replace his miserable prosthetic leg, nearly a decade old, and provide for his family.

He chose a life as a dairy farmer after the war and now struggles every day. “I need to walk a lot and it is tearing my artificial leg apart. I heard a new leg costs 40,000 [Nepali] rupees (about 400 dollars).

“I don’t have the money, but my limb hurts during summer and winter, morning and night. Both cold and hot weather are bad for my injured leg,” he tells IPS.

Nepal’s Peace and Reconstruction Ministry estimates that there are 4,305 war disabled in the country, but some experts suspect that the figure could be closer to 6,000. Even at the highest estimate, the number seems manageable compared to Sri Lanka’s post-war burden.

The Sri Lanka Foundation for the Rehabilitation of the Disabled estimates that over 110,000 were left disabled by three decades of civil conflict. The bulk of the war-disabled lives in the northern and eastern provinces, which bore the brunt of nearly 30 years of fighting.

In both countries, generations of war have piled hundreds of problems on top of one another; in both places, the war-disabled have been relegated to the bottom of the pile.

For those like Magar peace has not brought much respite.

Soon after his debilitating injury, the young man received treatment in India, funded by his party, the People’s Liberation Army (PLA). Afterwards, he lived in a commune where support for the Maoists was strong.

Soon after the signing of the 2006 Peace Accords, which marked the PLA’s transition to mainstream politics, Magar received a prosthetic leg from the International Committee of the Red Cross (ICRC) and the option of a retirement package of between 500,000 and 800,000 Nepali rupees (5,000 to 8,000 dollars).

He chose to buy a plot of land and attempt to make a living as a farmer, but this was easier said than done.

He gets an allowance of about 6,000 rupees (roughly 60 dollars) each month, and supplements it by selling dairy products, but the joint income is scarcely enough to put food on the table.

“It is not enough to support my family; everything is expensive these days and I am the only breadwinner. It would have been different if I had been an able-bodied person,” he laments.

He also accuses his former party of neglecting those like him who have been injured. Indeed, the disabled here are disproportionately represented within the 30-40 percent of Nepal’s population living in poverty.

The same refrain of neglect and misery can be heard all across northern Sri Lanka. The tale of Rasalingam Sivakumar, a 33-year-old former fighter with the separatist LTTE, is almost identical to that of Magar.

Sivakumar was injured in the eye in January 2009, as the war drew near to its bloody climax, and is partially blind now. He cycles miles everyday to sell poultry produce in his native town of Puthukkudiyiruppu in the northern Mullaithivu District.

The father of two kids aged one and seven years old, Sivakumar did receive some assistance – amounting to about 50,000 Sri Lankan Rupees (roughly 450 dollars) – through a programme run by the ICRC, which also served some 350 other disabled persons across Sri Lanka last year.

The sum is barely enough for a family of four to survive on for two months in Sri Lanka. Since then, he says, it has been a constant struggle to make ends meet.

Records maintained by local government bodies in the north indicated that unemployment among the disabled was as high as 16 percent in 2014, four times the national figure of four percent. Activists suggest that the real figure is much higher, since only those persons who went through official rehabilitation programmes were surveyed.

Vellayan Subramaniyam, president of the Organisation for Rehabilitation of the Handicapped in Sri Lanka’s northern Vavuniya District, who has also toured Nepal, says that neglect of the disabled is a combination of a lack of policies, and discriminatory social attitudes.

“We live in cultures that treat the disabled as not differently-abled, but as a burden. And post-conflict policy makers work in that conundrum. The disabled are relegated to the sidelines until someone from [that same community] reaches a decision-making position,” the activist contends.

Until government policies take into account the disabled, arguably among the most marginalised members of society, those like Sarojini Tangarasa will continue to plod along a lonely road without much hope for a better future.