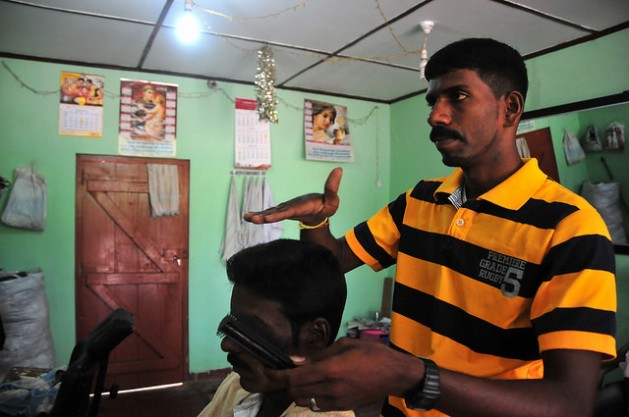 KILINOCHCHI, Sri Lanka, Jul 14 2014 (IPS) - People are willing to wait a long time for a few minutes in the hands of Aloysius Patrickeil, a 32-year-old barber who is part-owner of a small shop close to the northern town of Kilinochchi, 320 km from Sri Lanka’s capital, Colombo.

Old men with bushy moustaches sit on chairs alongside youngsters sporting trendy haircuts and beards in the latest styles from Tamil movies, while mothers drag their kids into the long line for the barber’s coveted chair.

“He is the best in town,” Kalliman Mariyadas, a young man waiting his turn, says confidently.

“They want a better life, they want to live like ordinary people.” -- Murugesu Kayodaran, rehabilitation officer for the Kilinochchi District Divisional Secretariat
A few years ago, Patrickeil wasn’t such a famous man, nor did he wish to be one. Till 2009 he was a member of the Liberation Tigers of Tamil Eelam (LTTE), the armed separatist group that fought a 26-year-long civil war with successive Sri Lankan governments for independence for the country’s minority Tamil population.

Patrickeil, now the father of a one-and-a-half year-old infant, was part of the LTTE’s naval arm known as the Sea Tigers until a military offensive decimated the rebel group in 2009.

Today, he is wary of divulging details of his past career.

“There is no point – what happened, happened. I don’t want to go back there,” he tells IPS, while massaging the head of one of his middle-aged clients.

His main aim now is to make sure his enterprise keeps making money. “People will always want to get haircuts, so it is a good job selection,” he says with a smile.

A beloved member of the community, he loves to talk of his shop and his future plans, but not so much about his violent past and involvement in a conflict that claimed some 100,000 lives on both sides. 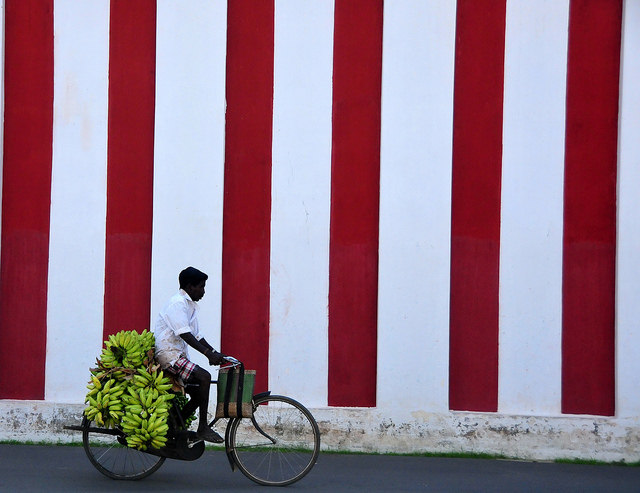 A man transports bananas in the northern town of Jaffna, the political and cultural hub of Sri Lanka’s Northern Province, which has reaped at least some of the peace dividends. Credit: Amantha Perera/IPS

When the Sri Lankan government declared victory over the Tigers in May 2009, after a bloody battle in the former rebel-held areas in the north and east of the country, close to 12,000 LTTE cadres either surrendered or were apprehended by military forces, according to government data.

By June this year over 11,800 were released following rehabilitation programmes of varying length, leaving 132 in detention.

Patrickeil himself was in detention, and then underwent rehabilitation (including vocational training) until February 2013; like thousands of other former militants, he must now navigate the former war zone as a civilian.

“They want a better life, they want to live like ordinary people,” says Murugesu Kayodaran, rehabilitation officer for the Kilinochchi District Divisional Secretariat.

But after years of war, violence and no sense of what “ordinary” life means, he tells IPS, this seemingly simple task is harder than it first appears.

Of the released ex-Tigers, most are engaged in manual labour in the north, according to data provided by the Bureau of the Commissioner General of Rehabilitation. Other popular areas of employment include the fishing industry, the farming sector or the government’s civil defence department. 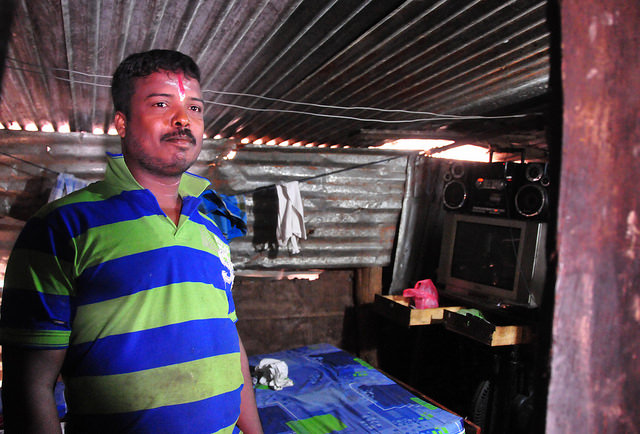 Very few official programmes offer assistance. One government loan scheme provides individuals with up to 25,000 rupees (192 dollars), but so far only 1,773 who qualify for the programme have received the money, according to existing records.

An initiative undertaken by the International Committee of the Red Cross (ICRC) offers grants of 50,000 rupees (roughly 380 dollars), but since 2013 only 523 have received the modest sum.

“We try to help the most deserving cases after careful evaluation,” M S M Kamil, head of ICRC’s Economic Security Department, tells IPS. The lack of complimentary schemes, however, means that thousands are floundering without a steady income.

Kayodaran says that sustained long-term assistance is needed to foster careful reintegration of thousands of ex-combatants, many of whom still feel stigmatised.

“They feel they need financial independence to be able to feel normal like the others, but there are other underlying issues like depression, trauma and lack of family support that remain unaddressed,” he says.

Just a few miles west of Patrickeil’s popular salon, 37-year-old Selliah Bavanan works alone in his tire repair shop in the small town of Mallavi. Also a former Tiger, he is evasive about his role in the group.

All he confides to IPS is that “the situation at the time demanded that we make the decision to join the group.” 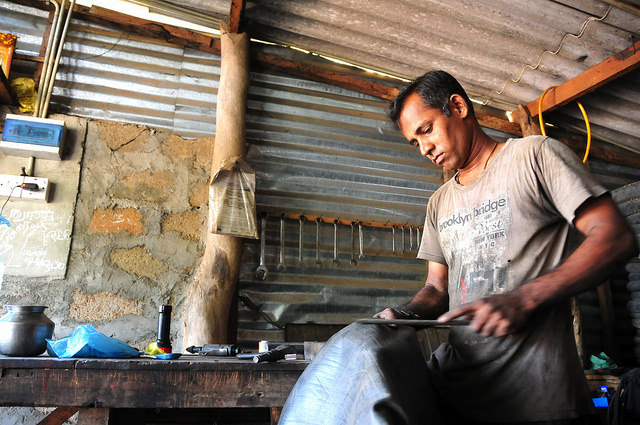 Selliah Bavanan, an ex-LTTE cadre, now runs a tire repair shop in the Northern Province, and avoids talking about his past. Credit: Amantha Perera/IPS

Now he keeps a close eye on the road that links Kilinochchi, the main financial hub in the region, with the western parts of the district.

“My primary customers are the big vehicles,” he states, adding that there are many that take the route these days, ferrying material for the large-scale development work taking place in areas that were held by the Tigers until early 2009.

When he received the ICRC grant earlier this year, Bavanan made an astute decision – he invested the money in equipment for his humble enterprise and has seen a sharp spike in customers ever since.

Patrickeil received a similar grant and invested the money in mirrors, scissors and other accessories for the shop that was owned by a friend. “I pay half my daily income to the owner,” says Patrickeil who also makes about 3,000 rupees per day in a region where the monthly cost of living is some 25,000-30,000 rupees (190-230 dollars).

Life on this small income is not easy, with many ex-combatants in the region supporting extended families. One injured former LTTE cadre that IPS spoke with was supporting a family of three, plus a younger brother and two ageing parents. 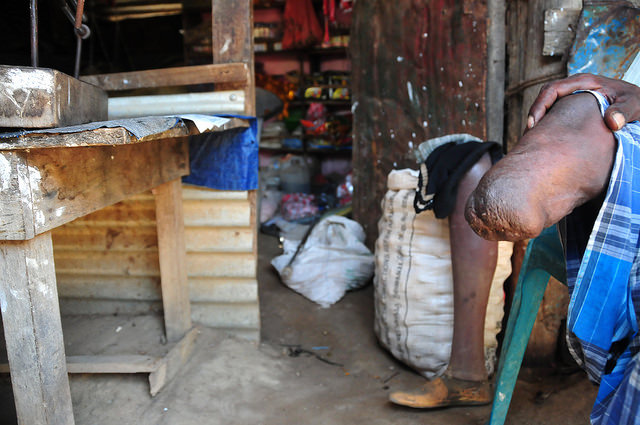 Those left disabled by the war, both civilians and ex-combatants, make up over 10 percent of the population of Sri Lanka’s Northern Province, but very little official assistance is directed at them. Credit: Amantha Perera/IPS

Psychological assistance programmes for those traumatised by years of war are just getting off the ground in the former conflict areas, but none of them are designed specifically for ex-combatants.

There is also no official data on how many former LTTE members were wounded, but government records suggest that at least 10 to 20 percent of the Northern Province’s population of some 1.1 million people are war-injured, a large number of which were combatants during the conflict.

They say their biggest challenge now is social acceptance and financial independence. While the immediate outlook is bleak, many harbour aspirations of improved circumstances in the years to come.

“First there was war, then there was peace; now we have poverty, and hopefully the next stop will be prosperity,” says Patrickeil’s customer Mariyadas, standing up for his turn with the Sea Tiger-turned-barber.