After War Comes Peace, Not Prosperity 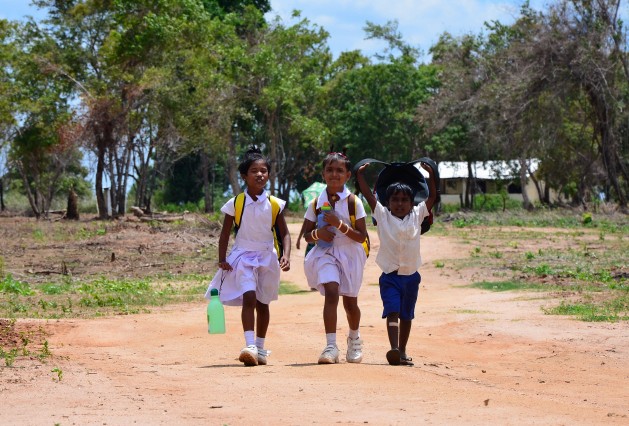 Education has been boosted in the Northern Province of Sri Lanka, but with few jobs to follow. Credit: Amantha Perera/IPS.

COLOMBO, Feb 12 2014 (IPS) - Sri Lanka’s war-battered Northern Province had reason to celebrate when the results of a countrywide exam were announced last December. Of the 16,604 students from the province who sat for the exam, 63.8 percent secured the required marks for entry into prestigious national universities.

It was a spectacular performance for a region wrecked by three decades of sectarian conflict that ended in May 2009 with a military offensive. The region has endured a tedious reconstruction effort since then.

"Graduates have to either move out or settle for manual jobs, even become masons or assistants to masons.” -- Sivalingam Sathyaseelan, Secretary to the provincial Ministry of Education

“It is a national high,” Sivalingam Sathyaseelan, Secretary to the provincial Ministry of Education, told IPS. “Education was always seen as a ladder to a better life in this region – even before the war. Once again people seem to be thinking about that.”

Sathyaseelan, however, was quick to point out that a good education did not mean a good job or even gainful employment in the province.

“There are lots of graduates who are unemployed, there are no jobs here. Graduates have to either move out or settle for manual jobs, [and] even become masons or assistants to masons.”

The country’s overall unemployment rate is around four percent of the labour force, but the figures for the north are exceptionally high. Data is only available for two of the five districts that make up the province, and they are twice the national unemployment rates – Mannar at 8.1 percent and Kilinochchi at 9.3 percent.

Some economists say unemployment rates in the north and, overall in the island, may be higher if stricter calculation parameters are used.

In the Northern Province “the unemployment rate could be a staggering 32.8 percent,” economist Muttukrishna Saravananthan who heads the Point Pedro Institute for Development based in northern Jaffna told IPS.

Lack of jobs and income is creating a vicious circle in the north. Experts say many secondary school children are dropping out to search for jobs.

Rupavathi Keetheswaran, a government agent for Kilinochchi district, says that as post-war assistance reached an end and income levels suffered, many families either headed by women or with disabled family members have found it hard to make ends meet.

There are an estimated 40,000 families headed by women in the Northern Province.

Ramalingam Sivaparasgam, a national coordinator with the International Labour Organisation (ILO), told IPS that children in secondary schools were most prone to being pulled out of school.“The primary reason is lack of livelihoods – the responsibility of earning falls on children,” he said.

Education official Sathyaseelan says that when graduates and others with higher educational qualifications struggled to find jobs, it acted as a deterrent for younger students.

“When younger students see others struggling to get jobs, they find that education does not help much, and want to quit.”

Analysts warn that despite the government spending on the rehabilitation of the former conflict zone, few benefits have gone to those who suffered the worst – the more than 460,000 who fled the war and have now returned.

Within a lopsided reconstruction effort – in which many experts feel more attention has been paid to large infrastructure projects over creating jobs and income – education is one area where everyone, from the government to tens of thousands of returnees, seems more or less satisfied with the redevelopment effort.

During a survey by the United Nations High Commissioner for Refugees released last year, an overwhelming majority of the war displaced who have returned to the Northern Province said they had no complaints on how the region’s education system has been revived.

The survey of 997 households found that “87 percent of the respondents are satisfied with the quality of education.”

But education – one of the fruits of peace – has not spelt prosperity for the Northern Province.

“Till date there is no targeted incentive scheme by the government for the private sector to invest and generate employment in the north,” economist Saravananthan said.

A recent study on global terrorism trends by the International Centre for Political Violence and Terrorism Research at the S. Rajaratnam School of International Studies in Nanyang Technological University in Singapore, also found that the government needed to do more to help the population.

The report said the Sri Lankan government needs to address the needs of ordinary people in the former conflict zone, dominated by the Tamil community as opposed to the Sinhalese majority in the rest of the country.

“This would not only include addressing issues such as livelihood relief and food insecurity but also examine local participation in the implementation of development programmes, psychological counseling for victims of violence and recruiting a sufficient number of Tamil-speaking government officials,” the report said.

This would mean projects such as factories that create jobs, funds to help farming and fishing, and efforts to get children to stay in school – efforts that have been slow to take off amid mega development projects.