Women Battle On After Lanka War 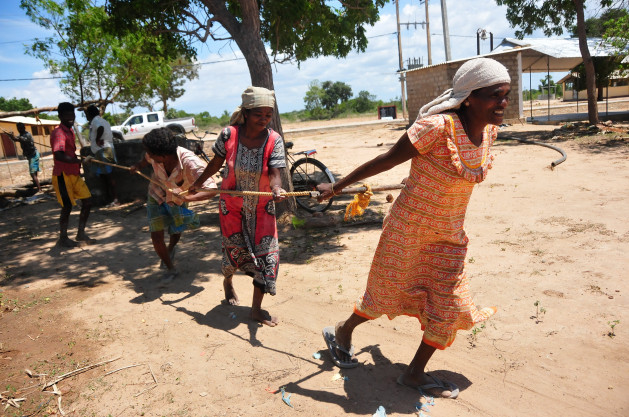 BATTICALOA/KILLINOCHCHI, Sri Lanka, Oct 30 2013 (IPS) - The battle might have been over four long years ago, but for the women in Sri Lanka’s former conflict zones in the northern and eastern provinces, the war continues.

This struggle is not only about making ends meet, but also about saving their honour. The island nation’s 26-year-long civil war (1983-2009) between the separatist Liberation Tigers of Tamil Eelam (LTTE) and the government forces left many women the sole breadwinners for their families with their menfolk either killed, maimed or gone missing.

The dire financial situation has led to increased incidents of exploitation of women. “Women who head their households are often financially desperate due to the lack of income and some may as a result engage in sex work or sexual relationships for favours,” said a recent report by the UK-based Minority Rights Group (MRG), titled Living with Insecurity: Marginalisation and Sexual Violence against Women in North and East Sri Lanka.

"The man kept talking about how good my body looked and how we could come to some arrangement if I was willing to do certain favours."

The Centre for Holistic Healing in Kilinochchi, under the Anglican Church, reported that about four months ago 15 women seeking assistance from the institute met job agents from outside the province. Soon they all left the district and no one has heard from them since. The fear is that they might have been forced into prostitution.

Women are also increasingly at the receiving end of male frustrations related to unemployment and job loss, according to a survey conducted by the U.N. Office for the Coordination of Humanitarian Affairs (OCHA) in June.

“We were informed that there are increased rates of sexual and gender-based violence against women in particular, domestic violence mainly due to alcoholism and frustration caused by unemployment, among other things,” the Report of OCHA’s Visit to Seven Districts in Northern and Eastern Provinces noted.

“We were also informed that there are increased cases of early marriages and rape cases,” said the OCHA officials who prepared the internal report after a two-week tour of the northern and eastern provinces.

A recurrent concern in the 19-page report is the persistent dangers faced by vulnerable communities within the returnee population such as children, the disabled, the elderly and females heading households.

According to the MRG report, there are at least 80,000 widows in the country’s northern and eastern provinces, out of the total population of around 2.5 million.

In the Northern Province, which saw some of the worst fighting in the last days of the war in 2009, there are at least 40,000 single female-headed households, according to the Jaffna-based Centre for Women and Development, an organisation that works on gender-related issues in the north.

“It is a very hard life for these women,” Saroja Sivachandran, the head of the centre, told IPS. “They have to feed families in a region where even able-bodied men find it hard to find employment.”

A survey conducted by the U.N. Refugee Agency in July found that only nine percent of the resettled population of 138,651 families in the Northern Province had permanent employment.

“You can just imagine how hard it must be for a woman in her 30s, who has never worked in her life, to look for a job here,” Sivachandran said.

Farah Mihlar, MRG’s South Asia expert, told IPS that there was hardly any worthwhile investment in the region targeting income generation for single women looking after their families. “The main point is that there needs to be a proper assessment of the needs of female-headed households and employment opportunities created accordingly,” she said.

“The women themselves must be part of these decisions,” she added.

Highlighting another aspect, Sivachandran said that the women left without any able-bodied male relatives are also trapped in a patriarchal Tamil social system that has not changed despite the prominent role played by women as fighting cadres within the Tigers.

No one knows this better than Kaleiwani (name changed), an ethnic Tamil woman in her mid-30s, who was a former member of the LTTE’s dreaded female wing. “When I held a gun, everyone respected me. Today I am a nobody, worse than a stray dog.”

Kaleiwani had served in the organisation’s military ranks from 1998 up until early 2009, when the Sri Lankan military’s concerted action against the force ultimately led to its decimation.

The Tigers had no use left for Kaleiwani after she sustained a major hand injury, and left her to survive and escape the bloody battle raging around her on her own.

Somehow surviving the last bouts of the bloody fighting, Kaleiwani spent some time in rehabilitation centres before returning home to her native village in the Batticaloa district of Sri Lanka’s Eastern Province.

She returned to discover that nobody wanted her, not even her own family. Her sister, married to a government employee, asked her not to visit her, because she did not want to seem suspect.

When she approached a public official for some documentation, she said “the man kept talking about how good my body looked and how we could come to some arrangement if I was willing to do certain favours,” Kaleiwani told IPS.

Another woman from Allankulam, a village in the Mullaitivu district in the Northern Province, who did not want to be named, recounted a similar experience. A widow with three children to look after, she began building a new house after returning to her village, and needed to get a new title deed.

She said she was crying all the time but could not say anything because of her children. “Otherwise I would have slapped him.”