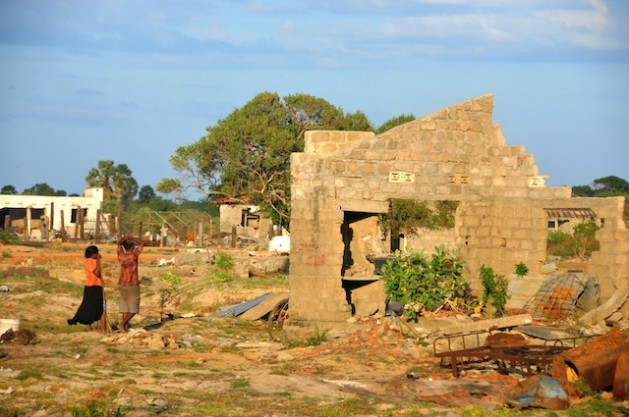 According to the Red Cross there is a need for at least 129,000 new homes in Sri Lanka’s former war zone. Credit: Amantha Perera/IPS

MULLAITIVU, Sri Lanka, Dec 23 2012 (IPS) - The landscape in northern Sri Lanka’s former war zone can change abruptly from the ordinary to the surreal.

Areas that lie on the main highways, or major towns like Kilinochchi, Paranthan and Mullaittivu, have replaced the rubble with restaurants, banks, shops and ATM machines. Here, three and a half decades of civil war that only ended in May 2009 seem to have been long forgotten.

But travel deeper into the areas once controlled by the separatist Liberation Tigers of Tamil Eelam and bombed, bullet-ridden buildings rise sharply up from the ground, creating craggy shadows and dark silhouettes at dawn and dusk.

Further to the east of the rebel-held areas, particularly where the final battles were fought, hundreds of rusting buses, trucks, cars and bicycles are heaped on the side of the roads. Among these remnants of a bloody past, men, women and children walk with their heads bowed, all their attention focused on the ground.

What they are likely looking for is the best means of making some money in the region – scrap metal.

Buyers from outside the region flock to towns like Mulliattivu to buy the scrap that fetches between 30 and 40 rupees (0.20 to 0.30 dollars) per kilo.

Seasoned collectors can rake in anything from 2.5 to 3.5 dollars a day, a hefty amount in a region where new jobs are scarce and unemployment is feared to be as high as 30 percent by some experts, though no officials figures are yet available.

And things are likely to get worse.

Sri Lanka is facing serious funding shortfalls to meet the massive rebuilding requirements in the former war zone. Earlier this year the government and the United Nations made an appeal for 144 million dollars through the Joint Plan of Assistance for the Northern Province, but had received only 33 million dollars in pledges by the second week in December.

This marks the second consecutive year that the U.N.-Sri Lanka joint appeal will record a shortfall of over 100 million dollars. In 2011, the country needed close to 289 million dollars but when the appeal closed in mid-January it had received just 93 million dollars in pledges.

Officials at the U.N. country office here told IPS that some underfunded projects from last year were transferred over to 2012, making the budget even tighter this year.

Those involved in the reconstruction effort warn that the funding gaps have slowed down the recovery process for the over 470,000 people who have returned to the northern and eastern provinces, including over 241,000 who were displaced during the last bouts of fighting between mid-2008 and April 2009 as government forces advanced into rebel-held territory, forcing the LTTE to retreat deeper into their de facto state.

The construction of new houses is one such area that is staring at a huge funding shortfall.

The International Federation of Red Cross and Red Crescent Societies (IFRC) estimates that there is a need for at least 129,000 new homes, while 41,000 units are in need of extensive repairs.

So far there are commitments to build around 80,000 new units. The bulk of that comes from the 43,000 units the Indian government is constructing. The IFRC is building around 16,000 houses funded by various donors including India.

By mid-November little over 21,000 houses had been completed and a further 6,070 were under construction, according to data maintained by the U.N. country office. But beyond that, there is not much on the horizon.

Mahesh Gunasekera, IFRC’s senior programme coordinator for northern Sri Lanka, says the funding gap is worse than he has ever experienced in his long career in humanitarian work in Pakistan, Sudan and Nepal.

Gunasekera told IPS that the northern region is looking at a funding shortfall for around 70,000 to 80,000 new houses in 2013, including those in need of major repairs.

“No one knows from where or how the money will come in,” he said.

Experts like Gunasekera attribute the funding gaps to global financial woes, other humanitarian disasters taking attention away from this small country and, ironically, Sri Lanka being labelled as a Middle Income Country by the World Bank.

A recent evaluation by the U.N. Office for the Coordination of Humanitarian Affairs (OCHA) said that the responsibility of sustaining post-war recovery should now move from the shoulders of humanitarian organisations to the government.

“The needs of those that have returned could be argued to be more recovery and development oriented and the responsibility of the Government of a middle income country…” according to the report.

Experts believe this will require a significant policy shift at the centre. The Sri Lankan government, which has so far carried out the bulk of the development and infrastructure work in the region, would have to open up the region to increased private and external funding, said World Bank Managing Director Sri Mulyani Indrawati who toured the north in early November.

“You definitely want more opening up and faster. It will create more opportunities for other resources to come in,” Indrawati said.

The north – especially those areas where the fighting was intense – has lagged behind in job creation due to a lack of incentives and stimulants for the private sector, as well as for local small and medium scale industries, according to analysts.

Indrawati said that even big infrastructure projects need to be planned so that they use the available local resources.

So far these projects have been heavily reliant on machinery and provided limited employment opportunities for the local population.

He believes development and reconstruction needs to include the participation and utilise the capacity of the local community in order to create sustainable employment opportunities.