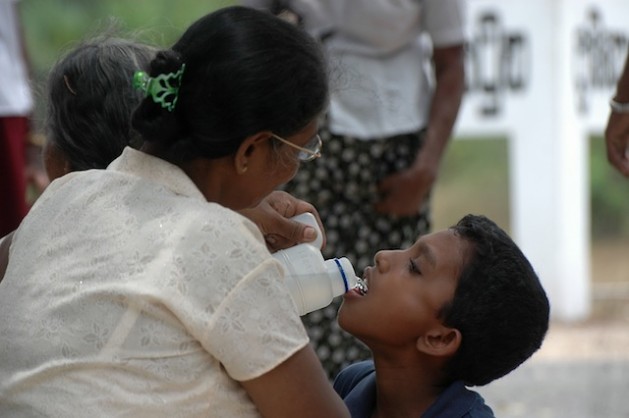 JAFFNA, Sri Lanka, Nov 10 2012 (IPS) - War is seldom good for anything, especially protracted conflicts like the one in Sri Lanka, which dragged on for over three decades and claimed between 80,000 to 100,000 lives.

But in a strange twist, this island nation’s civil war seems to have been a blessing in disguise for the precarious water resources in the northern Jaffna Peninsula, the region that bore the brunt of the fighting.

The political and cultural nerve centre of the island’s minority Tamil population, Jaffna became the de facto capital of the separate state claimed by the Liberation Tigers of Tamil Eelam (LTTE), which fought successive Sri Lankan governments from 1983 to 2009 for control over the north-east of the country.

Many civilians, caught between the LTTE and the armed forces of the government of Sri Lanka (GoSL), began fleeing Jaffna en masse. Thus agricultural crops scaled down to the subsistence level, businesses remained small and large-scale development projects became a kind of endangered species.

With the defeat of the LTTE in 2009 came a new wave of development that is steadily transforming Jaffna into a bustling metropolis working overtime to make up for the ‘stagnation’ that prevailed during the war years.

While many observers have hailed these plans to put Jaffna into development overdrive, environmental experts are warning that the region’s water supply, which remained relatively untouched during the war, will not withstand an all-out offensive in the name of economic growth.

A recent study undertaken by the International Water Management Institute (IWMI) found that Jaffna’s delicate underground water table could easily be polluted from rampant use of fertiliser, or disturbed by extraction efforts that could allow seawater to seep into the shallow freshwater supply.

“The opening up of Jaffna after the war is putting enormous pressure on the water resources,” IWMI Country Head Herath Manthrithilake told IPS.

No rivers run through the 1000-square-kilometre peninsula, which is comprised primarily of limestone. Water for agriculture and human use has hitherto been drawn from dug wells, though some parts of Jaffna now have access to pipe-borne water.

“It is an urgent issue. We need to take note of (Jaffna’s precarious water situation) and put adequate measures in place before it’s too late,” Thushyanthy Mikunthan, a senior lecturer in the Department of Agriculture at the Jaffna University, told IPS.

The scientist added that if Jaffna wishes to rely on the existing rain-fed waterbed for its needs, it must stick to minimal consumption, not extract more water than the limestone is holding. She believes water extraction should be below 50 percent of the annual recharge by rain.

Alarmingly, a study carried out by Mikunthan a year before the war ended found that, even then, extraction levels were almost 20 percent higher than the recharge rate, despite the region receiving an above-average rainfall that year due to Cyclone Nisha.

“Results of the water balance study clearly show falling trends in groundwater storage, thereby demonstrating over-exploitation of the groundwater aquifer,” according to the study.

Manthrithilake voiced similar concerns. “We are not calling for a shut-down of Jaffna, simply a more holistic approach to development, where water management is also considered,” he told IPS.

The IWMI country head warned that if the water is contaminated, it would be impossible to get it back to safe levels. “Once salt water seeps in, it is next to impossible to clean the water,” he said.

Mikunthan told IPS that despite the serious nature of the problem, very few people at the decision-making level were paying attention to it. “The situation must surely have changed for the worse from the time when I did my research,” she said.

Her research found that the most severe cause of exploitation was the use of mechanised pumps to extract groundwater, especially for agricultural needs.

Now with new markets opening up, agricultural production, which had hitherto relied on organic farming techniques, is increasing by huge margins.

Christine Kurukularajah, a small-scale farmer in the region, confirmed that production has increased due to the free availability of fertiliser and pesticides, which had been banned by the LTTE during the war years.

“There are no restrictions at all now,” she told IPS.

The shallow waterbed in Jaffna means an overuse of fertilisers could easily seep into the fresh water.

“My research has indicated that there is link between nitrate in drinking water and the rise in cancer in the region,” Mikunthan said.

Mikunthan also warned that Jaffna was at the mercy of changing weather patterns. The region has seen fluctuating weather, with short bursts of high intensity rains followed by extended periods of drought.

In fact, a long drought that began early this year was broken only by a cyclonic storm during the last three days of October.

For the time being, the best hope for Jaffna is the new water scheme, whereby water will be pumped in from the Iranamadhu tank, located about 50 kilometres south of the Peninsula.

Though work on the project has begun, this supply is not expected until at least 2015.

Manthrithilake told IPS that there was the possibility of increasing Jaffna’s water outlets by excavating the roughly 1000 large ponds found in the region and digging new ones.

He said some government authorities were also looking at new extraction sites in the southern part of the Peninsula. “But everything is in the planning stages,” he said.

“Until we can add to the available water resources, Jaffna will have to manage with what it has and manage the resource diligently,” Mikunthan stressed.