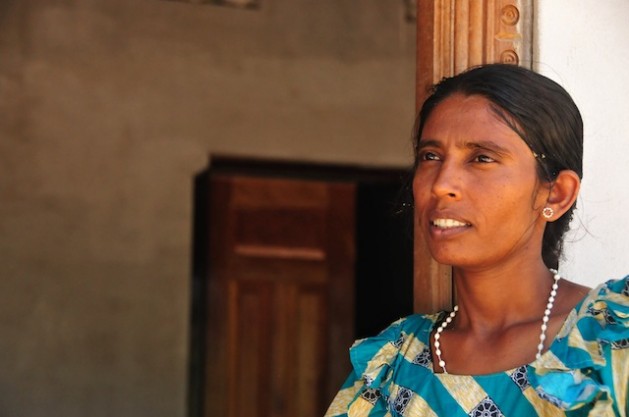 "War or no war, it is still a man's world out there,” says war widow Rajina Mary from Sri Lanka's northern Kilinochchi District. Credit: Amantha Perera/IPS

DHARAN, Nepal, Dec 13 2012 (IPS) - Sita Tamang’s husband went missing sometime in 2004, two years before Nepal’s civil war came to an end. A native of Dharan, a town about 600 kilometres southeast of Kathmandu, Tamang waited seven years after his disappearance before she tried to claim compensation offered by the government after a 2006 peace deal ended this country’s bloodshed.

When she finally managed to get hold of government officials in Dharan overseeing compensation procedures, she was met with the thorny request that she “prove” her marriage to the father of her three children, whom she had lived with for a decade and a half.

As was customary, Tamang and her husband had gone through the traditional marriage ceremony but had not obtained any civil documents.

In addition to taking care of her three children, including two daughters, Tamang was saddled with the added burden of seeking the required paperwork before even beginning the bureaucratic process of securing compensation.

“That is the way things are here,” she told IPS simply. “Women will always have it a bit hard.”

Thousands of miles away, in northern Sri Lanka, Rajina Mary, a 38-year-old war widow with four children, ran into similar hurdles when she began constructing a new house with assistance from the Sri Lanka Red Cross in late 2010, about a year and a half after this country’s civil war ended.

“The labourers would not take orders or instructions from me because I was a woman. They are used to taking orders from men,” Mary told IPS, standing in front her house in the village of Selvanagar in the northern Kilinochchi district, deep in the former war zone.

When the workmen refused to follow her instructions, Mary and her children were forced to take over the construction themselves, digging most of the foundation and carrying hundreds of bricks and cement sacks.

“It was cheaper for us. But that is the way things are here, it is a very male-dominated society,” Mary said, echoing Tamang’s words.

Aid workers, counsellors and experts working in post-conflict regions in the two South Asian countries say the patriarchal nature of rural societies makes them unenviable locations for widows or female heads of households. 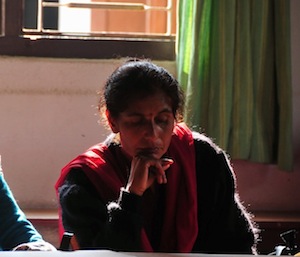 A woman remains pensive during a support group meeting for families of missing persons in the southeastern Nepali town of Biratnagar Credit: Amantha Perera/IPS.

“There is a lot of anxiety, a lot of depression. Most of these women live in isolation without anyone to talk to, even when they live among family,” Srijana Bhandari, a counsellor with the Women’s Rehabilitation Centre (WOREC) working in Dharan, told IPS.

After her husband disappeared in 2004, one woman struggled for seven years to send her son to school and seek assistance for her young daughter’s epileptic condition. It was only in November 2011, when WOREC began talking to her, that she finally opened up about the many challenges confronting women suddenly left to fend for themselves and their families.

Now, thanks to the advocacy group’s intervention, her son has a scholarship at the village school and she receives a monthly medical stipend for her daughter.

“Before we spoke with her, she was finding it really hard, there was no one to help her, some members of her family even looked at her as a burden,” Kamal Koirala, WOREC’s programme coordinator, told IPS.

Even on the rare occasions when women find new marriage prospects, they come under enormous pressure – ironically from their female in-laws – to reject the offer. As a result, many women end up eloping, leaving their children behind, WOREC officials said.

Koirala told IPS that women rarely, if ever, open up about pressure brought on them to turn to sex work, but said aid workers have strong suspicions that the practice is widespread.

The situation is not much different in Sri Lanka according to Saroja Sivachandran, who heads the Centre for Women and Development, a non-governmental organisation working on gender issues in the country’s northern Jaffna peninsula.

Despite a three-decade-long conflict in which many females fought alongside their male counterparts, especially among the ranks of the separatist Liberation Tigers of Tamil Eelam (LTTE), northern Tamil society is still steeped in patriarchal values, Sivachandran told IPS.

“The problem is that now, single women or female heads of households – and there are thousands of them – have to compete with males for everything from jobs to housing assistance,” she said.

In both countries, scores of women were left to navigate the post-war landscape after the fighting ended.

The Nepali Red Cross lists 1401 persons as still missing, six years after the conflict ended. Officials say at least 90 percent of the families left behind are now headed by women, 80 percent of whom are mothers.

In Sri Lanka, the United Nations estimates that around 30,000 of the 110,000 families that have returned to the former war zone in the northern province are headed by women.

In 2010, the World Bank found that two-thirds of the participants in a cash for work programme worth 5.5 million dollars were women.

In fact, programme managers made special allowances for the women by offering more flexible working hours. The programme also paid elders who looked after children while their mothers or caregivers took part in the work scheme.

But the women who are faced with rebuilding their lives after decades of war, while also dealing with the suffocating customs and traditions of male dominance that date back generations, say there is very little chance of things changing.

“It was like this even during the fighting, why should it change when there is no fighting?” Mary asked.