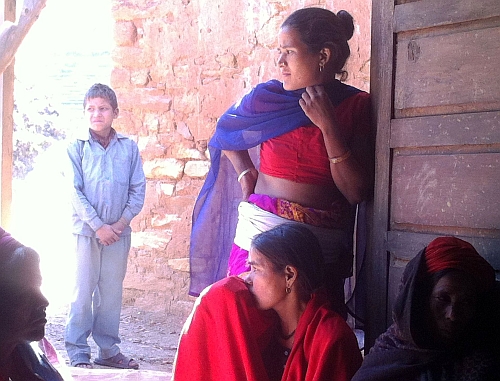 DAILEKH, Nepal, Apr 5 2012 (IPS) - Women in Nepal’s remote rural areas stood shoulder-to-shoulder with their men during the bloody 1996-2006 civil war that overthrew an oppressive monarchy, but many now battle domestic violence at home.

Rachna Shahi was only 15 when she joined the Maoist People’s Liberation Army in 2004. Today, she finds herself kicked out by her husband’s family and under pressure to grant him a divorce while her own family refuses to take her back.

“I joined the war to fight for women’s equality and our rights but many women like me are now at the receiving end of both family and society,” Rachna tells IPS. “I don’t know how I will survive now.”

Dhanasara Majhi, who also lives in this remote district 700 km west of Kathmandu, would have committed suicide, except that she does not want to leave her four children to the mercy of their abusive father.

“Sometimes I am tempted to kill myself, as that would end all my sufferings. But who will take care of my children after I die?” she asks wiping her tears and sobbing softly.

Her husband, Keshab Majhi, hits her with anything he finds handy such as an iron rod or a hammer and has even threatened to kill her with an axe.

Majhi gets particularly violent after he drinks alcohol. “We usually run towards the hills and hide in the forest until he is sober,” says Dhanasara. She is worried most for her eldest son, 12-year-old Rosan, who shows signs of being mentally disturbed.

Dhansara does not approach the police, fearing that this will enrage her husband all the more and because she knows that she will get no support from the local community. “My neighbours often accuse me of provoking him. I don’t know who to turn to for help.”

Dhansara and Ruchi share the woes of many Nepalese women, especially in the rural areas where they have little or no access to legal protection and end up living in constant fear and daily abuse.

Despite the alarming rate of violence against women, the government has done little to protect them, say women’s rights activists.

In 2011, there were nearly 700 recorded incidents of violence of which 40 percent were cases of domestic violence, according to the Informal Sector Service Centre (INSEC), a non-governmental organistion (NGO).

“Lots of incidents are never reported due to fear of reprisal and lack of access to legal aid,” says Khadga Raj Joshi, regional coordinator of INSEC in the western region.

Last year, 54 women were killed by family members in Nepal for disobeying their husbands or in-laws or for petty reasons such as objecting to their husbands’ drinking. Most of the perpetrators got away scot free for lack of evidence, says INSEC.

The Nepal Bar Association provides pro bono legal services in district courts, but these are too far away for women living in the remote rural areas, says Joshi. “Basically, the women are on their own and have no social protection even from their own families,” says Deepa Bohara, a social worker.

“It is socially acceptable for women to get abused at the hands of their husbands, a really disturbing attitude,” says Deepa.

A 2001 survey conducted by the Nepal demographic and health survey found that a large number of Nepali women, both urban and rural, thought it permissible for a man to beat his wife for not performing kitchen tasks properly, going outdoors without permission or denying sex.

Similar attitudes prevail across South Asia with Nepal’s largest neighbours Pakistan and India, ranking third and fourth respectively, in a global survey of perceptions of threats to women ranging from domestic abuse and economic discrimination to female foeticide.

The survey results, released in June 2011 by TrustLaw, a legal news service run by the Thomson Reuters Foundation, said the fact that “a government is corrupt and that female rights are very low on the agenda means that there is little or no recourse to justice.”

In Nepal, some government support is available to rural women in the para legal services at the Village Development Committees (VDCs), the lowest rung of the rural administration system.

“But, the VDCs have little authority to make any legal decisions and all they can do is encourage a compromise within the family,” says Bindu Khadka, a lawyer with the Forum for Women, Law and Development.

The one hope for rural women is the local police, attached to the country’s 3,915 VDCs, but they often swing in behind the perpetrators as the quickest way to maintain peace.

“We often find that the police, though responsible for prosecution and investigation, pressurise victims to compromise in the name of maintaining peace and harmony in society,” explains INSEC’s Khadka.

“I’m tired of asking the police for help. They do nothing and demand evidence of violence – my word is not good enough,” says 25-year-old Hastana Raut, whose husband abandoned her after three years of marriage.

Nepal, the republic, has seen many legislative reforms in the direction of gender equality ensuring greater economic, citizenship and political rights, safeguarding their sexual and reproductive rights.

Activists however say that these rights are yet to reach the grassroots levels.

“I feel I will have to live like this for the rest of my life. Who will help me anyway?” asks Pavitra Majhi, 21, whose husband disappeared three years ago, leaving her to be constantly abused by her father-in-law, and beaten by her mother-in-law.