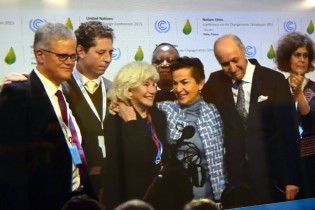 By Stephen Leahy
The U.N. climate talks in Warsaw ended in dramatic fashion Saturday evening in what looked like a schoolyard fight with a mob of dark-suited supporters packed around the weary combatants, Todd Stern of the United States and Sai Navoti of Fiji representing G77 nations.
ADVERTISEMENT ADVERTISEMENT