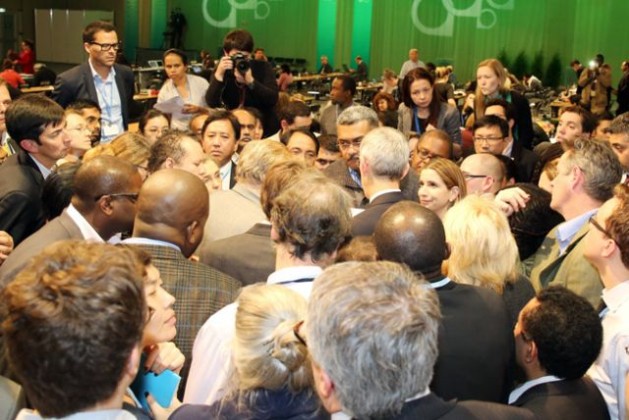 COP19 delegates huddle to resolve the issue of loss and damage. Credit: Courtesy of ENB

WARSAW, Nov 24 2013 (IPS) - The U.N. climate talks in Warsaw ended in dramatic fashion Saturday evening in what looked like a schoolyard fight with a mob of dark-suited supporters packed around the weary combatants, Todd Stern of the United States and Sai Navoti of Fiji representing G77 nations.

It took two weeks and 36 straight hours of negotiations to get to this point.

"We need those promises to add up to enough real action to keep us below the internationally agreed two-degree temperature rise.” -- U.N. Secretary General Ban Ki-moon

At issue in this classic North versus South battle was the creation of a third pillar of a new climate treaty to be finalised in 2015. Countries of the South, with 80 percent of the world’s people, finally won, creating a loss and damage pillar to go with the mitigation (emissions reduction) and adaptation pillars.

Super-typhoon Haiyan’s impact on the Philippines just days before the 19th Conference of the Parties (COP19) amply illustrated the reality of loss and damages arising from climate change.  Philippines lead negotiator Yeb Saño made an emotional speech announcing “fast for the climate” at the COP19 opening that garnered worldwide attention, including nearly a million YouTube views

His fast would only end with agreement on a loss and damage mechanism – an official process now called the “Warsaw Mechanism” to determine how to implement this third pillar. Much still needs to be defined. Climate impacts result in both economic and non-economic losses, including the growing issue of climate refugees, people who are forced to move because their homelands can no longer support them.

“This Warsaw decision on loss and damage is a major breakthrough,” said Bangladesh’s Saleem Huq, a senior fellow at the International Institute for Environment and Development in the UK.

“There is a long way yet to go for an effective climate treaty,” Huq told IPS.

Overall, the results from COP19 are mixed, said Alden Meyer, the Union of Concerned Scientists’ director of strategy and policy, who has attended all but one of these climate negotiations over the past 19 years.

“Loss and damages is big but we have the bare minimum in the rest to keep going,” he told IPS.

The U.N. talks known as COPs are part of a complex and acronym-laden process to create a new climate treaty to keep global warming to less than two degrees C, and to help poorer countries survive the mounting impacts.

In 2009 at the semi-infamous Copenhagen talks, the rich countries made a deal with developing countries, saying in effect: “We’ll give you billions of dollars for adaptation, ramping up to 100 billion dollars a year by 2020, in exchange for our mitigation amounting to small CO2 cuts instead of making the big cuts that we should do.”

The money to help poor countries adapt flowed for the first three years but has largely dried up. Warsaw was supposed to be the “Finance COP” to bring the promised money. That didn’t happen.

Countries like Germany, Switzerland and others in Europe only managed to scrape together promises of 110 million dollars into the Green Climate Fund. Developing countries wanted a guarantee of 70 billion a year by 2016 but were blocked by the U.S., Canada, Australia, Japan and others.

The mitigation pillar in Warsaw is even shakier. Japan said they couldn’t make their promised emission reductions and gave themselves a new extremely weak target. Canada and Australia thumbed their noses at their reduction commitments and are increasing emissions.

Today’s reality is that slightly more than half of annual CO2 emissions are coming from the global south. In Warsaw, the big emitters like China and India refused to take on specific reduction targets. Instead they agreed to make “contributions”.  Specific details about reduction amounts and timing was deferred to a specially-convened leader’s climate summit in New York on Sep. 23, 2014.

“We need those promises to add up to enough real action to keep us below the internationally agreed two-degree temperature rise,” U.N. Secretary General Ban Ki-moon said here in Warsaw.

The one surprising success at COP 19 was an agreement on REDD (Reducing Emissions from Deforestation and Degradation). This will provide compensation for countries that could lose revenue from not exploiting their forests. Deforestation and conversion of forests to farmland contributes about 10 percent of total human-caused CO2 emissions.

“We now have a system in place to do REDD and reduce emissions,” said Victoria Tauli-Corpuz, an indigenous representative from the Philippines.

It’s a strong package that includes verification, monitoring and safeguards for local communities. Countries have to put all of this in place before they can access finance either through the Green Climate Fund or through carbon markets, Tauli-Corpuz told IPS.

“Hopefully, it will pump a lot of money into local communities and reduce deforestation,” she said.

Honouring land tenure or land rights of local communities to care for the forests is the key to making REDD work as intended and benefit local people and not corporations or national governments, she said.

Emissions from deforestation have been slowly declining. However, the vast majority of CO2 comes from burning fossil fuels, especially coal, and it continues to grow quickly. Those emissions will heat the planet for centuries and yet governments spend more than 500 billion dollars to subsidise these industries, said Kumi Naidoo, Greenpeace international executive director.

“Democracy has been stolen by corporations,” Naidoo told IPS. “While activists and protesters are arrested, the real hooligans are the CEOs of fossil fuel companies.”

The only avenue left to people is civil disobedience and 2014 will be the year of climate activism, he said.

“Now is the time to put our lives on the line and face jail time,” Naidoo said.

In what may be the first of many such actions, more than 800 members of civil society walked of the COP negotiations on the second to last day “in protest against rich industrialised countries jeopardising international climate action” they said.

While international negotiations inch along, climate scientists are growing increasingly alarmed by mounting evidence that climate change is happening faster and with larger impacts than projected.

To have a good chance at staying under two degrees C, industrialised countries need to crash their CO2 emissions 10 percent per year starting in 2014, said Kevin Anderson of the Tyndall Centre for Climate Change Research at the University of Manchester.

“We can still do two C but not the way we’re going,” Anderson said on the sidelines of COP 19 in Warsaw. He wondered why negotiators on the inside are not reacting to the reality that it is too late for incremental changes.

“I’m really stunned there is no sense of urgency here,” he told IPS.