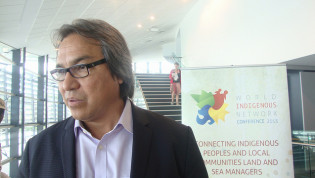 By Milagros Salazar
Some good-byes can actually mean the start of a long road working together. That was how it felt at the end of the World Indigenous Network (WIN) conference in this northern Australian city.

By Milagros Salazar
This city in northern Australia brought them together to share their experiences this week. They are indigenous Shipiba people fighting indiscriminate logging in Peru’s Amazon jungle region and delegates from the Ando-Kpomey community in Togo, which created and protects a 100-hectare forest.

By Milagros Salazar
“Are you a park ranger?” IPS asked. “No, I am one of the owners of the territory,” Ángel Durán responded in a firm voice. The Bolivian indigenous leader is in this northern Australian city along with 1,200 other native delegates from over 50 countries for the World Indigenous Network (WIN) conference.
ADVERTISEMENT ADVERTISEMENT