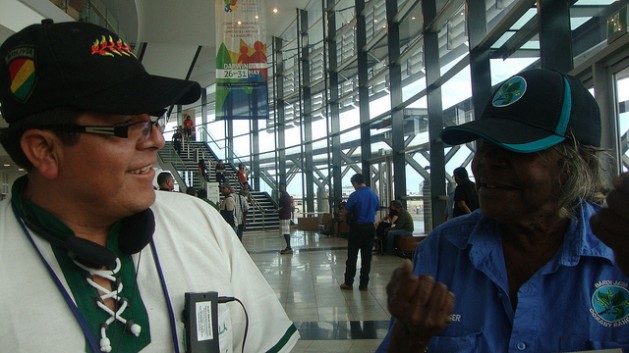 Indigenous activists Ángel Durán from Bolivia and Bernardette Angus from Australia share their experiences in conservation at the WIN conference in Darwin. Credit: Milagros Salazar/IPS

DARWIN, Australia , May 28 2013 (IPS) - “Are you a park ranger?” IPS asked. “No, I am one of the owners of the territory,” Ángel Durán responded in a firm voice. The Bolivian indigenous leader is in this northern Australian city along with 1,200 other native delegates from over 50 countries for the World Indigenous Network (WIN) conference.

Durán, who was born in and lives on a collectively-owned native territory, is attending the conference in representation of eight native groups from Bolivia’s Amazon region that total more than 20,000 people.

Although he is not on the programme as an official speaker and can only communicate in Spanish, this is not stopping him from sharing his knowledge and experiences with other indigenous leaders walking from one auditorium to another at WIN headquarters in Darwin, the capital city of Australia’s Northern Territory.

The meeting, supported by the Australian government, runs May 26-29, with presentations of successful projects for the preservation of ecosystems and biodiversity, the sustainable use of protected natural areas, and the development and food security of indigenous peoples of Africa, Asia, Latin America and other countries like Canada or Australia itself.

On Monday, United Nations Special Rapporteur on the Situation of Human Rights and Fundamental Freedoms of Indigenous Peoples James Anaya stressed the importance of governments recognising international instruments that protect the basic rights of native people.

Melissa George from Australia told IPS that the conference was a major contribution by the Australian government and a form of recognition that indigenous people were the first to use their knowledge to protect the territory.

George, who belongs to the Wulgurukaba aboriginal tribe, added however that there was still much to be done.

The activist has dedicated 20 years – nearly half her life – to developing projects for administering natural resources in aboriginal territories. She is now co-chair of the WIN National Advisory Group.

The initiative brings together the United Nations, governments, civil society, businesses and grassroots organisations to advance local sustainable development solutions and support the work of indigenous people around the world by means of capacity-building.

Eileen de Ravin, manager of the Equator Initiative, told IPS that this concerted effort opens up enormous possibilities for people from a South American country like Bolivia to learn directly what is happening in Canada or Australia.

“Our goal is to influence the governments to get them to respect and listen to these valuable experiences and solutions,” de Ravin said.

The Equator Initiative awards a prize every two years, recognising 25 outstanding local sustainable development projects. In the past decade, 152 indigenous community organisations, of 2,500 that have been nominated, have won the prize.

One of the presentations at the WIN conference was on the conservation of protected areas by indigenous and local communities in Canada, Australia, Sweden and Brazil by means of indigenous forest rangers, park rangers or environmental agents.

“The name doesn’t matter, the objective is the same: to make use of traditional knowledge to protect nature and culture from the different threats,” Brazilian activist Osvaldo Barassi with the Amazon Conservation Team (ACT) told IPS.

Since 2005, the Brazilian organisation has trained 190 people from 30 native ethnic groups in forest management and conservation, which has enabled the communities to develop projects to monitor illegal logging in order to protect the local flora and fauna.

But in spite of the contribution made by the indigenous forest rangers trained by ACT, they receive no payment from the government for their work.

That is in contrast to Australia’s indigenous land stewardship programme, which has created Indigenous Protected Areas (IPAs) in more than 50 locales on traditional aboriginal lands over the last 15 years, covering a total of 43 million hectares.

Bernardette Angus, a park ranger from Western Australia, told IPS that it is indigenous people who have been caring for the plants and animals and protecting the land and the sea since a long time ago, and who are teaching young people to continue doing so when the current generation is gone.

In Bolivia, the federation of indigenous peoples from north of La Paz, led by Durán, are seeking to go one step further in their conservation efforts, and have asked the government of Evo Morales – the country’s first-ever native president – to legally recognise the “guardians” of community-owned indigenous land to enable them to levy penalties on those who invade their land and make illegal use of their natural resources.

Durán, who belongs to the Leko de Apolo indigenous community, said no government plan aimed at protecting biodiversity could leave out the communities. “Not even scientific knowledge can compare to the ancestral know-how of the local people. We take care (of nature) because it is our way of life,” he told IPS.

But while Barassi recognised the importance of indigenous knowledge, he warned that it was not always a guarantee in and of itself of the successful management of natural resources. For that, capacity-building is key, the ACT activist stated.

Participants at the conference agreed on the need to join forces to maximise results in the face of threats from illegal activities, large-scale private investment projects, or the effects of climate change.

“I never imagined that the forests could disappear, but it is happening,” said Joao Evangelista, a Brazilian park ranger who was unable to travel to Darwin, but sent a videotaped message presented by Barassi to an audience keen on cutting the distances between them.

“That’s why capacity-building is important; it’s a form of liberation for us, and of preparing ourselves to confront outside threats,” he said.