COLOMBIA-ECUADOR: ‘There Are No Plants or Animals Left’

BOGOTA, Jun 6 2007 (IPS) - A new U.S. government report acknowledges that coca crops expanded last year in Colombia, despite the heavy herbicide spraying carried out under Plan Colombia, which has been loudly protested by neighbouring Ecuador for causing damages to human and animal health and food crops in border areas. 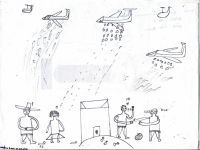 “Coca will never disappear,” said a woman sitting in a bus ridden by this reporter from the Pacific port city of Buenaventura to Cali, in the western Colombian province of Valle del Cauca. The driver and passengers sitting nearby nodded.

For the duration of the trip, as the bus climbed the western flank of the Andes mountains, the passengers had ridden in silence, listening to music. The brief conversation occurred in the last 10 minutes, before arriving at 8:00 PM at the station in Cali, the provincial capital, when the bus drove by a police station that was destroyed by a bomb in April.

The passenger who sparked off the conversation, a black woman who looked around 25, had not heard about the destruction of the police station. She explained that she had been living for a year in a remote jungle area in the southern province of Nariño, on the border with Ecuador.

She said that earlier in the day she had spent hours riding in a speedboat on the Pacific Ocean to the port of Buenaventura, and that she was carrying the fruits of a year of work – not money, but “merchandise.”

So at the end of the trip, this IPS reporter discovered that she had travelled for hours in a public bus carrying a shipment of drugs.

Before she was lost in the crowd, the woman mentioned that in the area where she had been working, there were enormous quantities of coca, the raw material of cocaine, of which Colombia is the world’s top producer and the United States the world’s leading consumer market.

The White House Office of National Drug Control Policy’s (ONDCP) 2006 report released Tuesday backs up her perception, reporting an eight percent increase in coca crops – some 13,000 hectares more than in 2005, for a national total of 157,200 hectares.

The increase was seen despite the fact that roughly 213,700 hectares of coca were destroyed in 2006, mainly by spraying with glyphosate, an herbicide, but also by hand, under the Plan Colombia anti-drug and counterinsurgency strategy.

The U.S.-financed Plan Colombia has destroyed 946,000 hectares of coca since 2000. The ONDCP explained the higher figures this year by pointing out that the area surveyed in 2006 was 19 percent larger than the previous year and that nearly all of the increase in coca cultivation was found in the newly surveyed areas.

Since 2001, the Ecuadorian Interinstitutional Committee Against Fumigations (CIF) has been studying Plan Colombia’s “side effects” and “collateral damages” to human health and food crops. The interdisciplinary civil society group’s reports have been cited by the Ecuadorian government when it has demanded that the Colombian government refrain from spraying within 10 km of the Ecuadorian border.

Colombia has announced that it is willing to pay compensation to the Ecuadorian farmers who have been affected by the spraying. But it is not yet clear whether that only includes indemnification for lost food crops.

CIF found that spraying of coca in Colombia had impacted crops and human health in Ecuador at two, five and 10 km from the border. The group found evidence of health problems like respiratory and digestive ailments, skin rashes, and damages to the eyes.

“These four problems diminished the farther we got from the border,” Spanish Dr. Adolfo Maldonado with the environmental group Acción Ecológica, one of the 11 Ecuadorian non-governmental organisations (NGOs) that make up CIF, told IPS in Bogotá.

The second study compared the people on either side of the border. CIF found “a high level of stress” among the Ecuadorian population, because the campesinos weren’t sure whether or not they should plant their crops, since the government has not been able to get the Colombian authorities to put a stop to the fumigations.

Meanwhile, “among the Colombian population what we found was an extremely high level of depression. The people knew it was the state that was doing this to them, and as a result there was no chance of turning to any official body for help, so they felt abandoned and neglected, and felt the need to leave the area,” said Maldonado.

The third study, conducted in 2003, carried out DNA testing among the local population to determine the health impact of the spraying, as part of an investigation by the Ecuadorian Ombudsman’s Office.

Those in charge of the study visited the area two weeks after the spraying occurred and carried out DNA tests designed to reveal genetic damages caused by chemical or other agents.

Samples were taken from 47 Colombian and Ecuadorian women who were selected because they live along the border and do not come into contact with pesticides in their work or other day-to-day activities, but were in the area when the Plan Colombia planes sprayed the glyphosate mix.

“We determined that 36 percent of the cells in the samples taken from the women were damaged, on average. A normal level of genetic damage in the population at large, whether urban or rural, is four percent, as was found in the control group of 25 women studied more than 80 km from the fumigated area, inside Ecuador,” said Maldonado.

“That obviously means the risk of cancer, congenital malformations in fetuses or miscarriages is extremely high, practically 800 percent higher than normal,” the doctor observed.

Another study, carried out in early 2006, analysed the impact of the spraying on food crops. In the border area “there are extremely high levels of malnutrition: 32 percent compared to 18 percent among the population living 20 km from the border,” said Maldonado.

This fourth study covered 25 schools in Ecuador with more than 1,700 students, and discovered, besides the poor nutrition and diets, “significant behavioural anomalies among the children.” As a result, the researchers called in a team of psychologists “to find out what was happening.”

“We found that 40 percent of the children were depressed and 46 percent had problems with self-esteem. We also found a 70 percent reduction in learning abilities,” a “terrible situation,” he said.

The next step was to compare drawings by children in the schools in the border region from different years. In the 2001 study, the children showed an “impressive” capacity of observation when asked to draw their impressions of the spraying.

“They could describe the different effects (of fumigation) on a cedar tree, a yucca plant, a banana tree,” said Maldonado.

But two years later, when they were once again asked to make drawings about the spraying, “the children began to show the bloodshed. What stood out in the drawings were the shooting and armed clashes. There was a major military presence, airplanes that practically filled the entire sheet of paper,” he described.

In 2006, when the children were asked to draw a family, “we were absolutely shocked and shaken,” said Maldonado.

“First of all, they stopped using colours. They abandoned colour. And second, they stopped drawing mouths. They no longer drew smiles. The only thing they put in were big open eyes, but no ears or mouths. That is a reflection of the children’s inability to express what is happening,” he said.

The psychologists summed up their findings “with a phrase that gave us all shivers: they had never seen children with ‘such low levels of happiness’.”

One little boy, Diego Gonzaga, from the village of El Cóndor near the San Miguel River that marks the border, painted a pig lying upside down, and wrote: “My piggy died. I loved him very much. I was going to buy my uniform to go to school. I ask whoever sees and reads what is in my drawing to help me to be able to finish primary school. There are no plants or animals left.”

Next to the San Miguel River is a warning sign that reads: “River polluted by Plan Colombia”.

Farm animals “are the savings of the poor,” said Maldonado. “The boy spends all year raising his pig, sells it, and with that money buys his uniform and school supplies. When the pig dies, the boy says: now I have no way to go to school next year.”

Ecuadorian campesinos living right along the border say they have lost between 75 and 90 percent of their crops as a result of the spraying across the border in Colombia. “This obviously has a heavy effect on the financial situation of the border population,” said the doctor.