KANNUR, Kerala, Jul 9 2007 (IPS) - Against the deep grey monsoon clouds looming large over the sparkling greenery of northern Kerala, Kallan Pokkudan stood like a hero, bearing his canoe&#39s oar, a pole and a water bottle. "I am going to inspect the mangrove,’’ said the stocky, middle-aged farmer. 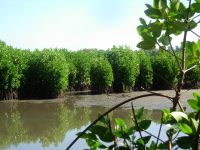 Monsoon is mangrove planting time and Pokkudan has planted 100,000 saplings with his own hands. Inspired by his work, the local youth and the forest department have coved several acres along the backwaters and estuaries here, making it the most lush stretch on this coastal belt – and Pokkudan a celebrity.

There is a 22-species mangrove forest that grows over a man&#39s height around Pokkudan&#39s village nestled in a wetland. It is advancing now and even devouring unsown paddy fields, but nobody minds. "It protects the villages here from wind, storms and the water that gushes down from the mountains when it rains. And gives us enough fish,’’ said Pokkudan.

Amid resort construction, sand mining and other assaults on the delicate coast, it is local conservation initiatives, such as restoring the mangrove forests, that offer any hope that the natural contours of Kerala, a rain-washed coastal strip, will stay intact.

Besides mangrove, locals are now recognising the value of sand bars that offer protection to the coasts against the ravages of man and nature, but these have fallen prey to sand miners who supply the construction industry.

In the southern district of Thiruvananthapuram, that houses the state capital with the same name, T. Peter, president of the state&#39s independent fish workers&#39 union, has been spending nights with his colleagues guarding a strip of sand between the Veli backwaters and the Arabian sea to save it from being carried away by sand miners and sold to the construction industry.

"Thanks to the thick sand bar that the waves have created there, our village was saved from the sea attacks this monsoon," Peter said. Last year, sea water had entered the village through a gouged out estuarine sand bar, devouring houses, flooding the churchyard famous for the annual feast of St Anthony and the open air theatre performances associated with it.

"This monsoon the sea attacked fishing hamlets all along the Kerala coast and possibly this fury is due to global warming," Peter said. "So we need to protect the coast even more."

Global warming is now increasingly being linked to extreme weather events. "Studies indicate that the warming of the troposphere (the lowest portion of the atmosphere) increases moisture content of the atmosphere and is associated with an increase in heavy rainfall events," V. Venugopal of the Centre for Atmospheric and Oceanic Science, Indian Institute of Science, Bangalore, told IPS.

The number of severe cyclone storms over the north Indian ocean has shown an increasing trend in the past three decades. A study published by Venugopal and colleagues in December 2006, based on rainfall data from central India, noted that extreme rainfall events were rising during the monsoon seasons from 1951 to 2000. The west coast trends are difficult to predict, but the scientists have warned about "enhanced risks associated with extreme rainfall over India in the coming decades".

When the climate changes it is the local events that enhance the disaster vulnerability. M. Baba, director of the Central for Earth Science Studies (CESS), Thiruvananthapuram, noted that population density, infrastructure development and destruction of environmental features along the coasts could worsen the impact of climate change.

Baba calls for an enhancement of all protective features against wave and tide attacks. "Coral reefs, mangroves, sand dunes, and sand bars – they all stop the waves, cut their fury.’’

South of Thiruvananthapuram, in Kanyakumari district, India&#39s southern cape, the local fisherfolk knew that much earth science all along. Giant dunes, wrapped up by the sand-binding ipomea (water spinach) creepers, guard several crowded hamlets here. The fisherfolk would rather walk around them to access the sea than spoiling them.

"When the (December 2004) Asian tsunami hit, these sand dunes protected the villages that stood behind them, considerably reducing the casualties," said Cletus, a veteran social worker based in the district.

For several years, there has been a conflict between those who protect the sand dunes and those who mine them for mineral industries. The beach sand here is rich in Ilmenite, the main ore of titanium oxide used in talcum powder and paints and monazite, a rich source of &#39rare earth&#39 metals and the radioactive thorium.

Recently, when a group of workers tried to dig out sand in and around Madala village they ran into stiff opposition from the local people and clashes broke out. "After the tsunami, the people here are more ardent in conservation efforts," Cletus said.

About 220 km south of Kannur is Chavakkad, a coastal village that has prospered through remittances from Gulf countries. In a surreal setting of decapitated coconut palms and the debris of brick mortar, Kumaran, a middle-aged labourer, is busy digging out powdery sand that the waves deposited in his red-tiled, plastered home right on the coast. "It was waves and water all over," said his son Madhu in his early 20s. "Last year also a lot of sand came in."

Part of the beach road is also covered by sand as the sea slowly advances. "About 30 or 35 years back the sand dunes here could protect the villages," recalled C.F. George, a retired school headmaster. Then they all disappeared as concrete mansions sprouted up with money from the Gulf. "People were giving away sand for free from their plots around their houses levelled and then truckloads of sand went into more construction."

Stopping the sand miners is not easy as many have covert political patronage. In Kollam district, at the tsunami-torn Alappad village local youth are helpless in stopping bulldozers gouging out mineral sand from a thin strip of coast. "

"It is not that mangroves can check a major disaster like a tsunami, but they can definitely cushion the impact of waves and tides," says Mohandas, a mangrove expert and cultural ecologist who works with the Kerala State Science and Technology Museum in Thiruvananthapuram. "Mangroves were part of our culture," said Mohandas. "Studies show that Kerala had 1,700 sq km of mangrove decades ago, but it has shrunk to patches in 17 sq km by the time I did my PhD in 1994.’’

Coastal protection is no one-size-fits-all story, but rather part of a basket of options, scientists say. "You have to pick and choose measures appropriate for the local geography," said Baba. The state fisheries commissioner Sanjeevaghosh echoes his concern. "We need a comprehensive approach to protect coastal areas. The coast has to be seen as an ecosystem."