WASHINGTON, Jul 12 2007 (IPS) - Despite the media’s and official Washington’s focus on Iraq and Iran as the most urgent challenges to U.S. foreign policy, a growing chorus of voices is calling for a major shift towards what they regard as the “central front in the war on terror” – Pakistan. 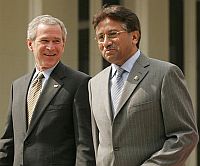 In their view, not only has the increasingly beleaguered president, Gen. Pervez Musharraf, and particularly his “double game” in supporting the Taliban in Afghanistan and providing it safe haven in Pakistan’s tribal areas along the border, become a serious liability to the furtherance of U.S. interests in the region.

But the entire military institution, the recipient of almost all of the ten billion dollars in aid Washington has lavished on Islamabad since 9/11, is also increasingly seen as a source of popular discontent and long-term instability of the kind that could only benefit al Qaeda and its radical allies.

As a result, a growing number of regional specialists here, including many in the government, are arguing for increased pressure on both Musharraf and the military – through the use of sanctions, if necessary – to cooperate with a genuine, if gradual, transition to democratic rule.

Such a policy is unlikely to be adopted, however, under the current administration of U.S. President George W. Bush. U.S. officials clearly hope that this week’s storming by Pakistani commandos of Islamabad’s Red Mosque, or Lal Masjid, against Islamist militants and students who had held it for some six months signaled a new determination on the part of Musharraf not only to crack down on radical clerics in Pakistan’s so-called “madrassa belt”, but also to try to take back tribal areas which his government had virtually surrendered to the Taliban over the past two years.

“Mr. Musharraf is a strong ally in the war against these extremists,” Bush said earlier this week as the battle for the mosque got underway. “He’s been a valuable ally in rejecting extremists. And that’s important – to cultivate those allies.”

That, indeed, has long been the line from the White House, which since 9/11 appears to have persuaded itself that Musharraf’s departure would most likely bring to power – and, with it, control over Pakistan’s nuclear arsenal – either a more Islamist-inclined general or Islamist parties that have been the main beneficiaries of military rule.

“I’ve heard Gen. Musharraf…tell American presidents that if you don’t support me, the next person will be the ‘bearded ones’,” Bruce Reidel, a former top South Asia specialist at the Central Intelligence Agency (CIA) who served on the National Security Council under both Bill Clinton and Bush, told National Public Radio this week.

That “nightmare scenario” has been particularly compelling to Vice President Dick Cheney and other hard-liners in the administration who, according to the well-connected Pakistani journalist Ahmed Rashid, have repeatedly rejected the advice of regional specialists in the State Department, CIA and even the Pentagon to exert real pressure on Musharraf to comply with his own promises both to move toward a democratic transition and dismantle terrorist networks associated with al Qaeda and the Taliban.

Those voices have been strengthened in recent months, however, as Musharraf, has been besieged by a number of challenges, ranging from the mounting protests over his suspension of the Supreme Court’s chief justice to the siege of the Red Mosque, that have dramatised his loss of popular support, among both secularists and Islamists.

At the same time, the Taliban’s resurgence in Afghanistan, the “Talibanisation” of much of the tribal belt in the wake of the army’s withdrawal, and the growing consensus in the U.S. intelligence community that al Qaeda’s planning and operational capacity has grown steadily stronger due in major part to the safe haven in those same tribal areas have persuaded even Musharraf’s former defenders here that his “double game” poses a serious threat to U.S. national security.

Evidence of a major change in elite opinion here has accumulated over the past month with a spate of newspaper editorials and columns and think-tank briefings urging Washington to distance itself from Musharraf and seriously engage the opposition, including its exiled leadership, former prime ministers Benazir Bhutto and Nawaz Sharif.

“What we need to be doing now is reach out to the civilian political centres in Pakistan, including the exiled leaders, and the democratic movement that has emerged in the last several months,” said Reidel. “Washington has been too preoccupied with the nightmare scenario. I think there is a real opportunity for a return to democracy, and the United States should be outspoken in support of that.”

Indeed, the well-attended release of a major policy paper by the Carnegie Endowment for International Peace here this week that called for the U.S. and the European Union (EU) to jointly put forward a “non-negotiable package” under which sweeping sanctions targeted against the military would be imposed if Musharraf and the military fail to comply with its past commitments on fighting terrorism and restoring democratic rule provided additional testimony to the shift in opinion.

The paper by French analyst Frederic Grare, “Rethinking Western Strategies Toward Pakistan,” argued that the West should, among other measures, impose an arms and commercial embargo against the army and all military-controlled companies and foundations, if Musharraf retains his presidential and army posts in violation of the constitution and fails to carry out free and fair parliamentary elections with international observers this fall.

The same sanctions would also be imposed if Musharraf failed to follow through on previous commitments to prevent all infiltration into Afghanistan and Kashmir and “immediately” dismantle the “terrorist infrastructure” within Pakistan, including organisations linked to al Qaeda.

The “strategic imperative,” according to Grare, should be to “break the link between the military and politics in Pakistan” a goal also endorsed by Stephen Cohen, a veteran Pakistan expert at the Brookings Institution. In a Washington Post column last week, he argued that the army must seek “a systematic withdrawal from politics” because it “cannot rule the state of Pakistan by itself.”

“The United States is paying lip service to a regime that is collapsing before its eyes and that may yet turn truly nasty,” warned Cohen, who, during the Carnegie session, predicted that the current administration was unlikely to adopt Grare’s approach.

The administration’s view, he said, was “Musharraf is our man, and we’re going to go down with him.”