PARAGUAY: The Dark Side of the Soy Boom

ASUNCIÓN, Nov 8 2007 (IPS) - A sea of green stretches as far as the eye can see on both sides of the dirt road leading to the communities of Lima, Capiibary and Guayaibí, 250 km from the capital, in the northern Paraguayan department (province) of San Pedro, one of the country’s poorest. 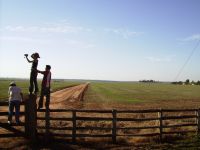 The huge fields are planted with genetically modified soy, Paraguay’s leading export product. But as it takes over more and more land, the crop is leaving sick people, displaced communities and trampled rights in its wake, according to the documentary “Soberanía violada” (Violation of Sovereignty).

The documentary, produced by a Paraguayan team, portrays the drama of campesino (small farmer) communities that experience the spread of soy plantations as a threat to their survival.

“The economic interests of large landowners – most of them foreigners – and multinational corporations are destroying entire communities, felling forests, polluting streams and rivers, making children sick, causing miscarriages, killing campesinos and forcing them to abandon their land and their culture,” says the synopsis of the 40-minute documentary.

Paraguay has become the world’s fourth largest exporter of soy, after the United States, Brazil and Argentina. According to the Agriculture Ministry, soy is grown on 2.4 million hectares of land and accounts for 38 percent of the country’s agricultural production.

The Paraguayan Chamber of Cereals and Oilseeds Exporters (CAPECO) announced that their goal for 2008 is to expand soy cultivation to four million hectares and to double export revenues from the commodity, which in the first quarter of 2007 amounted to 780 million dollars.

But that figure fails to reflect the social and environmental consequences of the expansion of soy cultivation, which are reflected in the documentary through dozens of testimonies from campesinos.

“The idea for the film came from the provincial Coordinating Committee for the Defence of Sovereignty, an umbrella group for representatives of organisations and leaders of different communities in San Pedro,” Arturo Peña, one of the producers of the documentary, told IPS.

“Soberanía violada” has been included on the programme of the One World Berlin Film Festival to be held this month in the German capital, where it is due to be screened on Nov. 18.

The filmmaking team’s general coordinator was Catalina Servín, and the documentary was written, directed and filmed by Malu Vázquez and edited by José Elizeche, with music by W. Krauch.

Their aim, they said, was to create a tool that could be used to raise awareness on the problem, which has got worse over the last five years as transgenic soy has expanded in the area.

“Thousands of families have already left the province after selling their land, usually because they were surrounded by the soy crops and endangered by the spraying of toxic agrochemicals. They had no choice,” said Peña.

The soybean boom has also brought unemployment. It requires little labour, and in the east of Paraguay soy has displaced cotton, which used to employ large numbers of people, the documentary says.

Small farmers, who make up a large proportion of the country’s six million people, have been displaced by large-scale soy producers.

According to a study by the non-governmental social research organisation Base-IS, 70 percent of Paraguay’s farmland is presently in the hands of foreign landowners, who are mainly Brazilian.

Some small farmers, however, have refused to budge. One example is Manuel Cuevas, who has cultivated beans, maize and other subsistence products near the village of Lima for 30 years. His 10-hectare property is surrounded by Brazilian-owned soy fields.

Cuevas has received several offers for his land, but he and his family have turned them all down. “So far we’re doing alright,” he says in a resigned tone of voice.

“I will never leave. I have everything I need here: land, running water, electricity. There is no reason for me to leave my land,” says Reinaldo Casco, another farmer, who adds proudly that his parents were among Lima’s first settlers.

“These are just two testimonies out of the dozens shown in the documentary, which reflect the abandoned state of these rural villages, left to fend for themselves for decades, with obsolete health systems, authorities who serve the interests of the big landowners, and roads in terrible condition,” Peña told IPS.

“And now they are also threatened by the crushing advance of the agroexport model,” he said.

Sociologist Tomás Palau, one of the authors of the book “Los refugiados del modelo agroexportador” (Agroexport Refugees), described the main effects of the rise of soy monoculture on rural communities.

“There is strong pressure on the campesinos’ land, because the market value has sky-rocketed,” he told IPS.

The campesinos are displaced in various ways: their land is bought or leased, or they are forced to leave because of massive spraying with agrochemicals.

“There are also armed groups operating in the area. It’s really an eviction army,” he said.

Spraying with toxic agrochemicals has negative effects on both human and animal health, “causing illnesses ranging from allergies and respiratory problems to cancer, foetal malformation and miscarriage,” Palau said.

The environment also suffers. “The agrotoxics poison rivers and the earth, kill microorganisms in the fertile layers of soil and increase deforestation,” he said.

But according to Palau, the least visible aspect of soy agribusiness is the fact that the revenues from soy exports do not remain within the country, because they belong to large foreign producers and corporations.

“Without realising it, we’re finding ourselves in a situation where an extremely high percentage of Paraguayan exports is controlled by three or four multinational corporations: Monsanto, which supplies seeds to 90 percent of the producers, and companies like Cargill, Louis Dreyfus and ADM (Archer Daniels Midland),” he said.

Soy cultivation in Paraguay began to expand in the mid-1960s and boomed in the late 1990s with the introduction of genetically modified seeds by companies such as Monsanto.

Intensive soy production has caused a fall in traditional activities like timber extraction, cattle ranching and even production of cotton, which used to be the country’s main agricultural export. The area under cotton cultivation has dropped from 509,000 hectares in 1990 to only 160,000 hectares in 2006.