DOURADOS, Brazil, Feb 28 2008 (IPS) - Valdelice Verón still regrets not being at her father’s side, but he had sent her to the city. And she still remembers that early morning on Jan. 12, 2003, when her daughter called out, “Mommy, grandpa’s on TV.” It was the news that her father was in the hospital, critically wounded. 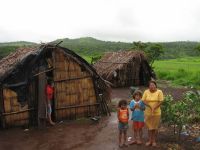 The victim of a brutal beating, Marcos Verón died the next day in the hospital in Dourados, in the midwestern Brazilian state of Mato Grosso do Sul. His nephew was shot in the leg but survived. The men accused of attacking them were released on bail while their trials are underway.

At the time of the attack, Marcos Verón, 70, was heading up the second attempt to recover an area of land that he and the rest of his group considered to be Guaraní indigenous territory, because it was where his ancestors had lived, and where his aunt was “burned alive in 1953.”

In 2001, the group he led had failed in their first attempt to occupy the estate in question, located in the municipality of Juti. But Verón could not bear to see his people camped out on the side of the highway, suffering from “malnutrition and dirty water,” so he led a second attempt to “take back” the land, his daughter recounts.

In 2007 these lands in the south of the state, on the border with Paraguay, were once again the scene of violence during three more attempts to recover the territory called Kurusú Ambá by the Guaraní people. Julite Lopes, 73, and Ortiz Lopes were shot to death, while several more indigenous people were wounded and others were arrested, absurdly accused of shooting their own relatives.

These deaths reflect the numerous ongoing land conflicts between indigenous people and large landholders. But they represent only a fraction of the total number of murders of indigenous people, which have risen significantly in recent years, and mostly as a result of internal violence within indigenous villages, especially in Mato Grosso do Sul.

Of the 81 indigenous Brazilians murdered in 2007, according to preliminary figures from the Indigenist Missionary Council, 53 were from Mato Grosso do Sul, where there are an estimated 65,000 indigenous people from various ethnic groups, although the majority are Guaraní. In 2006, out of 48 indigenous murder victims, 20 were Guaraní.

This dramatic situation has led the state chapter of the Brazilian Bar Association (OAB) to take up a campaign with the slogan, “Respect Indigenous People, Stop the Genocide”.

“We have taken a stance: we are on the side of the indigenous people,” stated OAB president Fabio Trad at the Jan. 18 launch of the campaign in Campo Grande, the capital of Mato Grosso do Sul.

This position is not shared by all members of the bar, however, since there are more lawyers defending large landholders than indigenous people in the conflicts that have intensified in the last two decades due to the “retaking” of disputed lands, as well as in criminal cases.

Violent deaths have become especially prevalent in the Dourados Indigenous Park, a 3,561-hectare reservation tucked between the city of Dourados and vast expanses of soybean fields.

There are roughly 12,000 indigenous people living on the reservation, and the majority are Guaraní from the Kaiowá sub-group. In 2007, at least 21 people were murdered on the reservation, which translates into 175 deaths per 100,000 population, seven times higher than the national homicide rate.

The reservation also has the highest teen suicide rate in Brazil, a national tragedy that began to draw particular attention in the early 1990s. More recently, the Kaiowá have been struck by severe rates of child malnutrition and mortality. All of these factors have combined to make death an almost everyday occurrence here.

The violent deaths are largely a case of indigenous people killing other indigenous people, most frequently by using the machetes employed for harvesting sugar cane. Both the victims and perpetrators are predominantly young.

One of the roots of the violence is the limited amount of land – a mere 0.3 hectares per person – which is tantamount to “confinement” on small reservations, according to anthropologists.

“Indigenous people are not prepared for so little land,” Anastacio Peralta, the coordinator of public policies on indigenous affairs in the Dourados city government, told IPS.

There are many other factors fuelling the violence, including “alcohol, drugs and prostitution,” as well as the loss of traditional culture among the younger generations and a great deal of outside influence, particularly through television, said Peralta.

Peralta himself is a Kaiowá who used to “cut down forests” on large estates and also worked in the freight trucking and logging industries before returning to Dourados in 1994, “invited by relatives.”

“The main problem is the drinking, and now drugs are starting to come in. Without these things, indigenous people don’t fight,” maintained Renato Souza, the “captain” of the village of Jaguapirú, which shares the Dourados Indigenous Park with the village of Bororó.

“Captain” is a post that was created by the governmental indigenous agency to regulate relations between each indigenous village and the surrounding society, particularly with the government, although its authority and recognition have been eroded in recent years. “But the community recognises me,” stressed Souza, who was elected to the post by his village.

The alarming rates of suicide are a consequence of “the lack of land and work,” but also of “the loss of traditional culture,” said Jorge da Silva, a local religious leader who has built a large “prayer house” where his people come for baptisms of children, corn and land, using the traditional implements.

“Saving Guaraní culture” is the solution to ensuring that children do not “follow the wrong path,” especially since the indigenous villages have been invaded by “churches from outside,” said da Silva, referring to the Pentecostal churches that have gathered large followings in Dourados and other indigenous areas.

Violence in the villages is “the most serious problem” facing the Guaraní, maintains Antonio Brand, a historian and professor at Don Bosco Catholic University who specialises in researching and promoting indigenous education.

The problem of hunger can be solved through the distribution of food, which is being undertaken though a government programme. But the violence affecting the complex inner organisation of the villages has resulted in a vicious circle, since every death further inflames tensions and the desire for revenge. “The root cause is confinement,” stated Brand.

Because the indigenous communities have begun to turn to the police instead of their traditional leaders, there is currently “an astounding number of indigenous prisoners,” he added, pointing to another form of violence suffered by the Guaraní, and especially those from the Kaiowá sub-group.

In Mato Grosso do Sul there are “almost 500 indigenous prisoners,” Wilton Matos, who lives in the village of Jaguapirú, told IPS. The son of “a Guaraní father and Terena mother,” Matos is the director of the Indigenous Affairs Commission created by the state chapter of the OAB to protect indigenous rights in the justice system and in prisons.

“The internal violence in the villages stems from desperation and protest,” said Matos. Indigenous people are imprisoned out of discrimination, and many are accused of statutory rape, since it is easier to charge them with “a crime without witnesses.” When this fails, they are charged with “aggravated assault on decency,” which is a lesser offence but punished with the same sentence, he noted.

Indigenous prisoners often end up behind bars after confessing because “when they don’t understand a question, the Kaiowá always answer affirmatively,” said Matos. This is a frequent occurrence, since most Kaiowá speak their native language almost exclusively and have little or no knowledge of Portuguese, he explained.

After his interview with IPS, Matos was going to assist a Kaiowá man in jail for horse theft. The man had been accused of stealing the horse by a white man, and when questioned by the police, he gave conflicting explanations as to where the horse had come from. As a result, the police gave his accuser temporary custody of the horse.

That night, the indigenous man went to the house of his accuser and took the horse back, and was subsequently arrested. Matos argued that the police had not fulfilled the accused man’s right to an explanation of the meaning of “temporary custody”.

As a result, he interpreted the police’s decision as a definitive one, and was simply trying to get back what he believed to be legitimately his. After clarifying the concept of temporary custody to the indigenous man, Matos succeeded in having him released.

Arbitrary prison sentences and the violation of the rights of indigenous prisoners by housing them with violent inmates are commonplace in the state of Mato Grosso do Sul, said Matos, whose own life illustrates the hardships faced by his people.

A cane cutter since the age of 13, he was an alcoholic for 14 years and only managed to overcome his addiction four years ago. He was able to complete his basic schooling and enter university ten years ago, at the age of 37, thanks to a stint as a radio show host with a large audience in Dourados.

There are very few indigenous lawyers, and even fewer who devote themselves to the cause of their people, Matos lamented. But this situation is changing. Of the 500 university students in Mato Grosso do Sul, an estimated 180 are studying law, and many of them have chosen this career as a means of defending their people’s rights.