PARAGUAY: Fighting for Survival in a Green Desert Wonderland

REPATRIACION, Paraguay, Mar 11 2008 (IPS) - "The first red stains on Nicanor’s white shirt" reads the inscription on a memorial niche at the side of the road to Ypecuá, 230 kilometres from Asunción, where peasant farmers are fighting for their land and against the diseases caused by agrochemicals used on nearby soybean plantations. 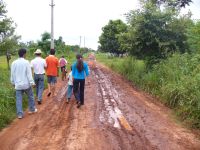 The rustic cemetery here is the final resting place of the remains of two farm workers from the settlement known as Juliana Fleitas, in the southern Paraguayan state of Caaguazú, who were killed in a violent police crackdown in 2004 ordered by President Nicanor Duarte against farmers protesting the fumigation of soybean crops.

The 90 families who live in the settlement maintain that the 1,100 hectares of land they have occupied since 1995 were illegally sold by the state to a high-level government official. After successfully resisting seven attempts to evict them, they finally succeeded in having a motion passed in Congress for the land to be expropriated.

However, the paperwork required to grant them legal title to the property has been held up at the National Institute for Rural and Land Development (INDERT), and without it they are unable to obtain credit, seeds or technical assistance to improve crop yields.

"When we began our struggle, this land was idle. Our leaders went to jail four times for trying to obtain land to survive and feed our children," community leader Blanca Cabrera told IPS.

The settlement’s residents belong to the National Campesino (Peasant Farmer) Federation, a network of small and medium producers and landless rural workers that stages occupations of unproductive land on estates with more than 3,000 hectares, considered "latifundia" or large landholdings.

Paraguay is the Latin American country with the greatest concentration of land ownership in the hands of large landholders. According to the last national agricultural census, a full 77 percent of the country’s fertile land was controlled by just one percent of its landowners.

The Juliana Fleitas settlement is named after a baby girl who died in her mother’s womb as a consequence of police brutality during an attempted eviction in 2004.

Antonia Ramírez, who was eight months pregnant at the time, suffered a miscarriage resulting from the blows she received while trying to stop the police from arresting her husband, Sotero Fleitas, for resisting the eviction.

On both sides of the rough road that leads to Ypecuá, vast expanses of soybean fields stretch as far as the eye can see. The people who live here call them a "desert of green leaves".

In recent years, soybeans have become Paraguay’s biggest export. The country is currently the world’s fourth largest soy producer, after the United States, Brazil and Argentina.

According to the Ministry of Agriculture, there are over 2.4 million hectares of soybean crops, which account for 38 percent of the country’s total agricultural output.

Large-scale soy production has pushed aside traditional economic mainstays like the logging industry, cattle raising and cotton farming. Once the country’s main export crop, cotton production dwindled from 509,000 hectares in 1990 to 160,000 hectares in 2006.

Guillermina Centurión told IPS that the residents of the settlement have been essentially "abandoned" and consequently suffer a severe lack of medical assistance.

Although the Ministry of Health has established a health post in the community, it is understaffed and poorly equipped, "and we are forced to travel almost 30 kilometres to the nearest clinic, which only attends to patients on Mondays and Fridays," she added.

The majority of local children suffer from skin ailments like lesions and rashes, as well as headaches, nausea and vomiting, which also affect adults.

The residents blame these health problems on the indiscriminate use of agrochemicals on the surrounding soybean plantations. For years they have been calling on the Ministry of Health to conduct toxicological tests to look for traces of these substances in the bloodstreams of potential victims, but so far their calls have fallen on deaf ears.

"We are constantly exposed to fumigations. The smell is unbearable and it lasts for several days, especially when there’s a lot of wind," reported community leader Juan Santa Cruz.

The majority of women in the community told IPS that they had suffered miscarriages.

Two years ago, Matilde de Noguera’s first son died at the age of eight months. He had been born with blisters all over his tiny body, and did not receive proper medical treatment because his parents could not afford the medication he needed.

Now her second son, a newborn, is suffering from the same problem: the skin on his body is raw and chafed and his face is covered with a rash.

Noguera and her son were discharged from the hospital after a four-day stay "even though neither of them is well enough to deal with this ailment," said Cabrera.

"We’ll see what happens, and we can only hope that it won’t be anything serious," she added in a tone of resignation.

The community survives on crops of cassava, peanuts and corn, although there are also a few fields planted with cotton and other food crops like squash and tomatoes, largely for their own consumption.

A portion of what they grow is set aside to be sold, although their profits are meagre due to the difficulties they face in reaching the market, the poor condition of the road and the low prices fetched by farm produce.

"This situation is undermining the campesino population," commented Santa Cruz. "They are not only trying to impose a model of agricultural production based on soybean monoculture, but also to destroy the small producers.

"This forces them to sell their land and migrate to the country’s urban areas to further expand the poverty belts," he added.

The so-called "Ypecuá case" was presented late last year in Geneva before the Committee on Economic, Social and Cultural Rights of the United Nations Office of the High Commissioner for Human Rights.

The Paraguayan government was reprimanded by the Committee for what it deemed serious violations of the International Covenant on Economic, Social and Cultural Rights, which the Committee is responsible for enforcing.

"This is Nicanor’s wonderland," quipped Marta Penayo, pointing to the landscape surrounding the settlement, where not a single tree stands today, although the area was covered with dense forests not many years ago.

Her comment evokes laughter tinged with bitterness among the community members, who in spite of everything are determined to continue their struggle.

"We are going to keep fighting back. We are not going to surrender to an economic model aimed at making us disappear," declared Melania Méndez.