HELSINKI, Apr 7 2008 (IPS) - There are growing concerns among the Sami people in Finland that their traditional way of life as an indigenous people is under threat. 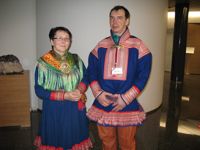 "The difficulty facing us is that we are facing comprehensive and complete assimilation all the time," Pekka Aikio, former president of the Sami Parliament told IPS.

The Sami are recognised in the Finnish Constitution as an indigenous people. They have an elected parliament that handles their affairs, and have the right to receive services in their own language. But parts of the state administration do not pay attention to the constitutional recognition, says Martin Scheinin, professor of international law at the Åbo Academy in Turku city, 170km from capital Helsinki.

"They keep treating the Samis as a linguistic minority," Scheinin told IPS following a meeting on the rights of the Sami organised by the Finnish League for Human Rights last week.

The Sami are an indigenous people of Northern Europe inhabiting mostly Sweden, Norway and Finland, with an estimated population of about 100,000. About 8,000 of them live in Finland.

Hundreds of Sami families are involved in reindeer herding, their traditional source of livelihood. But the process of assimilation means many of the Sami have taken on the lifestyle of other Finns.

Scheinin says the Sami way of life is threatened significantly by competing usage of land – often by the government itself – through cutting down forests. This destroys pastoral lands of the reindeer, and besides the harm done to reindeer herding, brings social and emotional stress.

A central issue, according to Scheinin, is that the Sami have no secure land rights in Finland. Large areas of land in the north where many Sami live is state-owned. "Nobody knows how the government got this land, from whom they bought it. They simply took it," said Prof. Scheinin.

The Reindeer Act protects the rights of the Sami people. "Nevertheless, it is the government that decides, and over and time again the state forestry agency decides that they can continue cutting the forest while claiming that it is a small project that would not negatively affect Sami reindeer herding. But when you look at the totality, it has huge impact," Scheinin said.

Aikio says reindeer herding is a general right. "It means others can own that land and we can be there with our reindeer but we have no right to complain if others are harvesting their timber or if they are starting a mining project or they are constructing a lake. In such circumstance we lose the pastoral lands almost without any compensation. Samis can use the land insofar as it is not being used."

In Norway, Aikio says, where a majority of the Sami people live, the situation is better because the government has given joint land ownership to the Sami and other local people. Norway has also allocated more money for the Sami than other countries have, he said.

The land usage rights of the Sami people is complicated by the fact that Finland has not ratified International Labour Organisation (ILO) Convention 169 on land rights for indigenous and tribal peoples. The Convention was adopted in 1989 and came into effect in 1991.

Article 14 of the Convention says: "Governments shall take steps as necessary to identify the lands which the peoples concerned traditionally occupy, and to guarantee effective protection of their rights of ownership and possession."

ILO Convention 169 would require Finland to start demarcation of land that belongs to the Sami either through ownership or through protected usage rights.

According to Prof. Scheinin, the resource rights related to land are crucial to the maintenance not only of the nature-based way of life of the Sami people, but also their language and culture.

"The Sami language lives and dies with the Sami way of life because the social activities around reindeer herding and in the nature-based forms of livelihood really keep up the living language. If it is isolated to a museum piece I think there will be no future for the Sami language," Scheinin said.

Finland&#39s Minority Ombudsman Johanna Suurpää says the government is not pursuing a deliberate assimilation policy. "The situation in the northern part of the country is not very simple because there are also non-Sami people who are engaged in reindeer herding, and so there are no simple solutions that would be fair for all parties," Suurpää told IPS.

Suurpää acknowledged difficulties over language. "The law provides that Sami people have the right to receive services in their own language but what is received is inadequate," she said. This is because there are no civil servants in the north who know the Sami language well enough. The usual focus is on land rights, but the language issue is becoming a "crisis", she said.

"It is only the artificial support that they are receiving across the borders from their brother and sisters that in way has enabled the continuation of their way of life," said Scheinin. "If it were the question of Finland alone, it would have resulted in destruction of the Sami way of life if not earlier, then during the last two decades."