UXBRIDGE, Canada, Sep 30 2008 (IPS) - Why do U.S. oil companies – some of the most profitable corporations on the planet – receive 20 to 40 billion dollars a year in subsidies from the U.S. government? 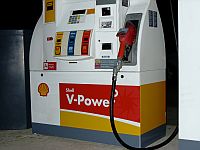 'US taxes on a gallon of gasoline are 45 cents compared to four dollars in most of Europe.' Credit: Steve Leahy/IPS

And, in a time of skyrocketing oil prices and profits, why did the George W. Bush administration in 2005 authorise an additional 32.9 billion dollars in new subsidies over a five-year period?

"I don't have a good answer other than to say we've been subsidising American oil companies since 1918," Koplow told IPS.

Koplow's 2007 report to the Organisation for Economic Cooperation and Development puts the annual U.S. subsidy at an average of 39 billion dollars a year, when the costs of guarding oil lanes in the Persian/Arab Gulf, and the Alaska Pipeline are included. This does not include any costs from the Iraq war.

Official U.S. government statistics from the Energy Information Administration (EIA) offer a different picture, stating that the oil and gas industry only received 2.15 billion dollars in 2007.

"The EIA has a very narrow definition of what constitutes a subsidy," said Koplow.

Experts agree that both forms of subsidies encourage consumption and thus increase the price of oil.

Estimating U.S. oil and gas subsidies is very challenging. Subsidies rarely involve cash payments. Instead scores of U.S. government agencies and departments create hundreds of programmes to support the U.S. energy sector. And there is no requirement for the federal government to keep track of all this.

Among the most common subsidies are construction bonds and research-and-development programmes at low interest rates or tax-free, assuming the legal risks of exploration and development in a company's stead and income tax breaks. Despite record high prices at the pump, the federal sales tax on petroleum products is lower than average sales tax rates for other goods. And on it goes.

Originally these production subsidies were intended to help the nascent industry meet a growing nation's energy needs. Despite record-high prices, that rationale remains firmly in place. In 2007, U.S. oil giant Exxon corporation made history with 40.7 billion dollars in profits, the most any U.S. company has ever achieved in a single year.

And subsidy programmes from 1918 are still in place.

"I'm not aware of any oil and gas subsidy that has ever been phased out," said Koplow, the leading expert on U.S. energy subsidies.

Energy subsidies are often simply hidden from public scrutiny. It's only recently been revealed that 40 companies granted leases between 1996 and 2000 for drilling in the Gulf of Mexico do not have to pay royalties for the publicly-owned resource. This is worth nearly a billion dollars a year in lost revenue to the federal government, according to a 2008 study by Friends of the Earth (FOE), a U.S. environmental NGO, and may ultimately total 50 billion dollars.

That study also revealed that the Energy Policy Act of 2005 would generate an additional 32.9 billion dollars in new subsidies in the form of tax breaks, reduced royalty payments, and accounting gimmicks over a five-year period.

"The report only includes the explicit subsidies we could find," said Erich Pica, an energy analyst at FOE.

"There are a whole lot of others out there that are less explicit," Pica told IPS.

U.S. businesses, for example, can deduct far more from their taxes on the purchase of a large SUV than they can for a fuel-efficient vehicle. "Every dollar spent subsidising oil companies is a dollar not spent on reducing oil use," he said.

These production subsidies do nothing to lower the price of petrol at the pump for U.S. consumers. It simply boosts companies' bottom line, Pica said.

Skyrocketing oil company profits and prices did put some pressure on the U.S. government to cut some subsidies and shift them to renewable energy sources which currently receive very little support. However, the much-touted 14-billion-dollar plan announced in January 2007 has stalled and is unlikely to pass this year, if ever, said Pica.

"It's outrageous that the big five oil companies who made 123 billion dollars in profit last year [ExxonMobil, Royal Dutch Shell, BP, ConocoPhillips, Chevron Texaco]continue to be subsidised by the U.S. taxpayer," he said.

The United States is a great place to be in the oil business. Energy analysts report that the U.S. government charges some of the lowest royalties and receives the least amount of taxes from oil and gas companies to extract a limited resource from public lands.

"U.S. taxes on a gallon of gasoline are 45 cents compared to four dollars in most of Europe," said Janet Larsen, director of research at the Earth Policy Institute, a U.S. NGO based in Washington.

"It's very easy to be in the oil business in the U.S. companies can drill wherever they want and make enormous profits, a lot of which is at the expense of taxpayers," Larsen said in an interview.

And the public is largely none the wiser, she said.

While reducing consumption subsidies results in people taking to the streets in India, merely talking about reducing U.S. production subsidies brings floods of silk-suited corporate lobbyists into the White House. And they are welcomed since the oil and gas industry is now a part of the current government, she said.

The energy sector's control of the government is the strongest and clearest evidence of the corruption of the U.S. political process, said award-winning journalist and author Ross Gelbspan.

"The private sector is manipulating the government for its own ends," Gelbspan, author of books on the energy sector's influence over government, told IPS.

Meanwhile the U.S. government said it cannot afford to invest 200 billion dollars in clean energy over the next few years. That investment would be enough to "jumpstart" the clean energy revolution that would see the U.S. able to dramatically reduce its emissions of carbon from fossil fuels, Gelbspan said.

The pace of global warming is already moving into overdrive and will become catastrophic without urgent action to reduce emissions. But action will not come from the White House, no matter who is charge, he lamented.

"We have taken the typical developing country corruption scandal to new heights in this country," he concluded.