MAPUTO, Nov 6 2008 (IPS) - Only a handful of women are running in Mozambique's municipal elections scheduled for Nov. 19. Among the 111 candidates vying to become president in 43 municipal councils, only eight are women. 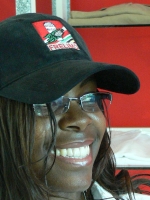 Of these, the ruling party Front for the Liberation of Mozambique (Frelimo) is fielding three, the main opposition party, Mozambican National Resistance Movement-Electoral Union (Renamo-UE, in Portuguese) fields one, and the rest belong to small parties.

Renamo's sole woman candidate, for Cuamba municipality in Niassa province, is its popular parliamentary bench chief, Maria Moreno. She is a strong asset in Renamo's effort to win more than the five municipalities it holds in its traditional support base in the central and northern regions – Beira, Marromeu, Ilha de Moçambique, Angoche and Nacala Porto.

"Some women have not freed themselves from the tradition of being participants instead of directly competing for leadership posts," he said.

Only the presidents of the municipal councils are elected by direct vote, while parties choose the members of municipal assemblies.

Frelimo's secretary for mobilisation and propaganda, Edson Macuacua, told IPS that in his party women are selected according to their capacity, not their gender.

"The right to run for office belongs to every party member. Women are not prevented from running. In Frelimo, we choose the candidate with the best profile," he said.

It seems that women would rather be selected through their parties instead of contesting in polls. Through the parties, though, they are making inroads at municipal level.

Sónia Maria Mboa, 33, is a municipal assembly member for Renamo in Maputo, the capital. She notes that self-censorship, low self-esteem and low self-confidence deter women from competing for top positions.

"Women still have the idea that politics is for men," she told IPS.

She warns, though, that emotion and desire are not enough to run for public office: "Women must also be competent."

Mboa is running for a second term and does not exclude running for Municipal Council president in the future. "I'm not stopping here, I have other plans," she said.

Her colleague at Maputo's municipal assembly, albeit for Frelimo, Farida Cassamo, is also running for a second term.

"Women are still under-represented in political positions but in every election we see an improvement. In 2003, there were few women candidates, now we have more," she told IPS.

With 30 percent of women in Parliament and growing numbers in municipal assemblies, Mozambique should not find it hard to reach the 50/50 representation of women in government of the Gender Protocol of the Southern African Development Community signed in August.

However, some doubt the wisdom of imposed targets.

"Renamo is not sure this is the right way. We think people must be candidates based on their competence and dedication. Set targets discriminate against women," said Mazanga.

He added that his party needed time to study the Protocol in detail.

Frelimo, a former Marxist party, has a history of promoting women, at least in its middle ranks.

"This is a principle we have embraced for 40 years, that women and men should have the same opportunities," said Macuacua. "At this rhythm, I believe we will fulfill our international commitments in time."

These are Mozambique's third municipal elections, part of a process of decentralization and devolving power to local level, as opposed to centralization by the capital, Maputo, and top-down, government-appointed governors of ten provinces.

The campaign kicked off on Nov. 4. Come election day, Mozambicans will find out if municipal politics is still "a man's thing."