KARACHI, Jan 27 2009 (IPS) - A fire which razed a slum settlement and killed 40 of its residents earlier this month has brought to the fore the deplorable conditions in which half of the 12 million people of this port city live – and official indifference to their plight. 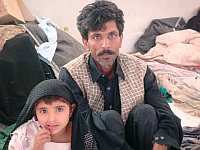 Mukhtar Ahmed, who lost 12 members of his family in the fire, with his sole surviving child. Credit: Zofeen Ebrahim/IPS

The government speculates that the blaze could have been caused by a live wire falling onto the roof of the shanties which were made of bamboo, cardboard and other combustible material.

But Zahid Farooq, programme director of the Urban Resource Centre (URC), is not entirely convinced and suggests that the conflagration could have been a case of arson. "There have been too many instances where such ‘accidents’ were planned to evict the poor from the land."

A nonprofit organisation, URC has been documenting incidents of fire in the informal settlements of Karachi since 1995. According to their survey, some 2,603 huts have been gutted in different settlements since January 1997.

Accidental fires often happen due to negligence in the dry winter months. "But, these are slow and the people are able to flee. You will not see so many casualties," explained Yunus.

The fire, whatever its cause, has underlined the need to provide housing for the poor. "The government must look into delivering land for high-density habitation at affordable prices," said Arif Hasan, a Karachi-based town planner.

Hasan suggests the introduction of a "social housing programme" with "land mortgage schemes".

Over the years, said Hasan, Karachi, once a multi-ethnic and multi-class metropolis has become segregated into areas for the rich and poor.

"The poor have been pushed further out of the city limits due to evictions which are carried out ruthlessly,’’ Hasan said.

‘’Those still inside the city live in constant fear of being thrown out,'' Hasan said. ''When they are evicted and provided alternate land, it is usually in the wilderness, far from their places of work, far from schools, health and transport facilities and where their women cannot find any work.’’

‘’Land use is unfortunately measured on the basis of commercial value and not social and environmental considerations,’’ said Hasan. He suggests the imposition of heavy penalties to stop market speculation in land which causes prices to go up.

Jorge Anzorena, a founding member of Asian Coalition of Housing Rights, currently on a visit to Pakistan, told IPS that one reason why it is always the poor who are evicted is because "the rich find their abodes an eyesore".

Citing United Nations figures, Anzorena said that an estimated 180,000 people move to cities every day due to poverty. "Every year one billion people are migrating from rural to urban areas. If this trend continues, it will double by 2030. It means there will be squatters all over the place."

"But when people are organised, which is not easy as there is a trust deficit, they will be able to resist evictions. However, it’s not enough just to be organised,’’ he said.

Anzorena travels across South Asia for six months in a year and teaches architecture for the other six months at Sophia College in Tokyo.

Meanwhile, the powerful Mohajir Qaumi Movement (MQM), in coalition with the Pakistan People’s Party in Sindh, is negotiating with the Board of Revenue to provide the survivors land to build houses. "Once we have the land, it will just take us a month to provide them homes," said Ismail Rajput, the area nazim (councillor).

The provincial government of Sindh has announced compensation worth Rs 100,000 (1,266 US dollars) to each of the survivors of the deceased. It has also assured the survivors that the government would make every effort for their rehabilitation and provide them land near the Bin Qasim outskirts.

But URC officials believe that land in Bin Qasim is not only far from the city centre but also is an absolute wasteland and would push the victims further into poverty. "These unfortunate people should be provided land and money to build their own houses. And it should be given where they were already living as that is where their workplaces are," said Yunus.

Yunus said the government should hold a "free and fair investigation to ascertain the cause of fire." He also said the compensation offered by the government was inadequate for the survivors to begin life afresh. "They should double the amount so that these people can begin earning their livelihood."

For now the survivors are housed in the auditorium of a nearby government-run school on the orders of the city’s mayor, Syed Mustafa Kamal, who belongs to the MQM.

"We have set up this temporary camp in the school till these people are provided with alternative housing," said Rajput. "Our party [MQM] is providing them with food, clothing and shelter. We have set up a 24-hour clinic with both a male and female doctor. We also bore the expenses for the burial of the 40 who died," he said.

A majority of the people living on the plot were migrants from villages in the Rahim Yar Khan district of Punjab province and were daily wage earners, scrap collectors or working as construction workers at nearby construction sites. Their women worked as domestic help in the affluent areas nearby.

Mukhtar Ahmed, who works as a chauffeur and has been living on the plot for a dozen years, lost 12 members of his family including his wife, seven daughters, three sons and a son-in-law. "In less than ten minutes I lost my entire world," Ahmed said.

"Many such people come from villages in Sindh and Punjab when there is a lull in farming to look for work in the urban areas. They keep going back and forth and always live near their workplaces in shanties,’’ said Yunus.