UNITED NATIONS, Feb 18 2009 (IPS) - The food crisis that spilled over from last year could take a turn for the worse in the next decade if there are no explicit answers to a rash of growing new problems, including declining agricultural production, a faltering distribution network and a deteriorating environment worldwide. 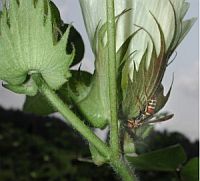 The Polistes wasp provides natural biocontrol to cotton fields by hunting down bollworms and other pests on the plant. Credit: Dominik Hundhammer/Wikimedia Commons

“Changing the ways in which food is produced, handled and disposed of across the globe – from farm to store and from fridge to landfill – can both feed the world’s rising population and help the environmental services that are the foundation of agricultural productivity in the first place,” says a new study titled ‘The Environmental Food Crisis’ released by the U.N. Environment Programme (UNEP).

With the steep increase in food prices in 2008, the number of chronically malnourished has reached a staggering 963 million, mostly in the world’s poorest countries.

Anuradha Mittal, director of the U.S.-based policy think tank Oakland Institute, says the findings of the latest UNEP study have to be seen in the light of its report released last year which offered evidence that organic agriculture can increase yields, improve soil, and boost incomes of farmers.

A crisis of this proportion raises major questions about industrial agriculture and how best to address the needs of the hungry, she said.

“Unfortunately, the widespread hunger and poverty is being used to make the case for increasing agricultural production through technical solutions such as genetically engineered (GE) crops and chemical-based agriculture,” Mittal told IPS.

However, UNEP’s research demonstrates that organic small-scale agriculture can deliver the increased yields without the environmental and social damage that has resulted from industrial model of agriculture.

“We need to pay heed to these findings and start crafting a different vision for agriculture which works with nature and not against it,” said Mittal, an international expert on issues relating to trade, development and agriculture.

A briefing paper by the Oakland Institute released Tuesday also confirms the success of the organic model, noting that on average, in developed countries, organic systems produce 92 percent of the yield produced by conventional agriculture. In developing countries, organic systems fare even better, producing 80 percent more than conventional farms.

In a study released last week, the Geneva-based U.N. Conference on Trade and Development (UNCTAD) said that despite the economic crisis, organic agriculture would continue to grow, representing an opportunity for developing country farmers including those in Africa.

“We need a Green revolution in a Green Economy but one with a capital G,” says Under-Secretary-General and UNEP Executive Director Achim Steiner.

“We need to deal with not only the way the world produces food but the way it is distributed, sold and consumed, and we need a revolution that can boost yields by working with rather than against nature,” he added.

The UNEP study released Tuesday says that unless more intelligent and creative management is brought to the world’s agricultural systems, the 2008 food crisis – which plunged millions back into hunger – may foreshadow an even bigger crisis in the years to come.

The major findings of the study include:

– The 100-year trend of falling food prices may be at an end, and food prices may increase by 30-50 percent within decades, with critical impacts for those living in extreme poverty who spend up to 90 percent of their income on food.

– Up to 25 percent of the world’s food production may be lost due to ‘environmental breakdowns’ by 2050 unless action is taken. Already, cereal yields have stagnated worldwide and fish catches are declining.

– Today, over one third of the world’s cereals are being used as animal feed, rising to 50 percent by 2050. Continuing to feed cereals to growing numbers of livestock will aggravate poverty and environmental degradation.

– The amount of fish bycatch currently discarded at sea – estimated at 30 million tonnes annually – could alone sustain more than a 50 percent increase in fish farming and aquaculture production, which is needed to maintain per capita fish consumption at current levels by 2050 without increasing pressure on an already stressed marine environment.

– Losses and food waste in the United States could be as high as 40-50 percent, according to some recent estimates. Up to one quarter of all fresh fruits and vegetables in the U.S. is lost between the field and the table.

– In Australia, it is estimated that food waste makes up half of that country’s landfill. Almost one-third of all food purchased in Britain every year is not eaten.

– Food losses in the developing world are also considerable, mainly due to spoilage and pests. For instance, in Africa, the total amount of fish lost through discards, post-harvest loss and spoilage may be around 30 percent of landings.

The study, compiled by a wide group of experts from both within and outside UNEP, also warns that climate change has emerged as one of the key factors that may undermine the chances of feeding over nine billion people by 2050.

Increasing water scarcities and a rise and spread of invasive pests such as insects, diseases and weeds may also substantially depress yields in the future.