ENERGY: Geothermal Is Not So Clean

REYKJAVIK, May 26 2009 (IPS) - Geothermal energy has always been thought of as a clean, renewable form of power, but since the Hellisheidi geothermal power plant began operation about 30 km from central Reykjavik in 2006, various problems have come to light. 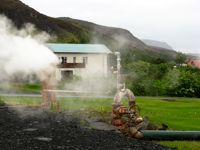 Not long after the station started producing electricity, Reykjavik residents became aware that they had to clean silverware every three to four days instead of three to four months because it was always covered with black soot.

Truck drivers who drove daily to sand mines in the western part of Hellisheidi found that the rubber in the suspension and steering systems of their vehicles became hard and prone to breakage after only a year, whereas normally it would take three to five years for this to happen.

People suspected that the Hellisheidi plant was responsible for the damage, but at first this was never discussed openly.

Then in September 2008, people saw that the moss vegetation adjacent to the Hellisheidi plant was severely damaged. The company Reykjavik Energy immediately arranged for research to be carried out on the moss damage, together with research at two other geothermal plants, Nesjavellir and Svartsengi, and a control site.

Moss damage was found at several places. Although no definite conclusions could be made because the effect of hydrogen sulphide (H2S) on moss has not been researched, there are strong indications that sulphur, derived from H2S, is the cause of the damage at Hellisheidi and nearby Nesjavellir.

The damage, in the form of patches of dead moss, occurred in spots exposed to the prevailing wind from the direction of the plants. Mercury, which is a cumulative poison, was also found in high concentrations in the dead moss from Nesjavellir.

The damage stems from the steam produced at the plant. Most of this is water, but 0.4 percent of the steam contains gases of various kinds – 83 percent is carbon dioxide (CO2), 16 percent hydrogen sulphide (H2S), and the remainder other gases. Trace elements in the steam include sulphur, mercury, boron, arsenic and aluminium.

The environmental impact assessment (EIA) reports assumed that because Hellisheidi is a windy, rainy place, most of the H2S would be transformed into sulphur and washed away into the soil instead of being carried elsewhere. Nevertheless, in 2006 and 2007 several measuring gauges were set up in the capital area to check the pollution levels.

The Hellisheidi plant was brought into operation in September 2006. Immediately, increased levels of H2S were seen in Reykjavik, especially when the wind blew from the east or south-east, from the plant to Reykjavik. Because of increasing concerns over H2S levels, more measuring devices are being set up around the city, and the Environment Ministry has requested the Environment Agency to find ways of reducing H2S levels overall.

The Environment Ministry is also working towards a new regulation on the release of H2S which will include maximum permissible discharge levels from geothermal plants. World Health Organisation (WHO) guidelines state that exposure to H2S should not exceed 150 micrograms per cubic metre, which Reykjavik has exceeded once so far.

Are levels of H2S poisonous to human health? At very high levels, yes, says Thorsteinn Johannsson, an air quality officer with the Environment Agency. “But the levels found in Reykjavik would not cause health problems. On the other hand, we know very little about the long-term effects of H2S on health. Iceland would be a good place to research this,” he said in a recent radio interview.

Johannsson says it is technically possible to reduce H2S levels from geothermal plants, but this is costly. “Various methods are known which are used all over the world,” he says. “The disadvantages of these methods are that pure sulphur, sulphuric acid or gypsum are left behind and there is an over-supply of all these products on the world market. However, Reykjavik Energy are trying out an experimental project of pumping the H2S back into the geothermal system.”

But can geothermal energy really be considered a renewable source of energy? No, says Stefan Arnorsson, professor of geochemistry at the University of Iceland. “In general, geothermal energy is not a renewable energy resource in the sense that the heat source is not replenished at a rate equal to or higher than it is extracted. This is clear for hot-dry rock systems (not yet exploited economically) and geo-pressurised systems.

“It is also true for tectonic systems where hot water convects in permeable fractures and the heat source is hot rock towards the base of the convection. The same applies to mature volcanic geothermal systems that are no longer charged by new magma that forms chambers in the roots of these systems.”