Stories written by Lowana Veal
Lowana Veal reports extensively on environmental and conservation issues from Iceland. She has also written for IPS on pioneering development of renewable energy. Lowana was born in Britain, but wrote her first article on environmental issues for a student newspaper in Australia in 1974 while studying for a biology degree in Melbourne. After returning to the U.K., she became involved in various magazine collectives in which she wrote, edited and designed material. She moved to Iceland in 1996 and started writing for IPS in 2004. She balances her writing work by taking people out for horseback rides. 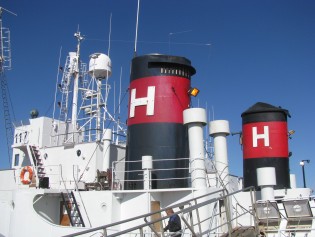 By Lowana Veal
A speeding ticket for driving an electric vehicle may seem at first a far-fetched possibility, but no. The director of Northern Lights Energy – a company specialising in promoting electric cars – was recently fined for driving 124 km per hour in a 90 km zone in Iceland in a Tesla Roadster vehicle.

By Lowana Veal
With rising energy prices and stringent requirements for producing a higher proportion of energy from renewable sources in the near future, long-distance electricity cables are increasingly thought of as a viable option for providing electricity.

By Lowana Veal
"With the fuel from the agriculture project, we are encouraging farmers to look at possibilities they might have to produce their own energy, while at the same time getting the Agricultural University and Farmers’ Association to work towards supporting and encouraging the farmers," says Haraldur Benediktsson, chair of the Icelandic Farmers’ Association about the campaign to reduce energy bought by farmers by 20 percent by 2015 and 80 percent by 2020.

By Lowana Veal
"We want to hear each others’ stories on how we have coped with changes, how we have got to where we are now and thus how we can be an inspiration to others," says Anna Loa Olafsdottir, one of the people behind a group of women in southwest Iceland who call themselves SKASS.

ICELAND: Recovering Dubiously From the Crash

By Lowana Veal
Three years ago, thousands of Icelanders were standing outside Iceland’s parliament building chanting "incompetent government" in an attempt to bring down the conservative government that had been seen as responsible for the collapse of the country’s banking system.

ICELAND: US Moves Diplomatically Against Whaling

By Lowana Veal
U.S. President Barack Obama has decided to impose diplomatic rather than trade sanctions on Iceland because of the country’s whale-hunting activities.

New Push to Get Whales Off the Table

By Lowana Veal
A campaign directed at tourists visiting Iceland aims to show them that, contrary to what they are led to believe by some restaurants, whale meat is not a traditional dish enjoyed by most Icelanders.

By Lowana Veal
Down by the old harbour in Reykjavik, a small group of volunteers in pale blue T-shirts can be seen handing out leaflets that say "Meet us don’t eat us". Beneath the slogan is a picture of a whale, followed by "Whales are being killed to feed tourists. Don’t let your visit leave a bad taste in your mouth."

By Lowana Veal
Public health authorities in Reykjavik have criticised plans for the expansion of the Hellisheidi geothermal power plant. They say that levels of the gas hydrogen sulphide could increase by 40 percent if a new geothermal field, Grauhnukur, is developed and nothing is done to ensure that the levels of the gas remain below maximum permitted levels.

By Lowana Veal
Iceland’s national power company, Landsvirkjun, has announced that it intends to double its generating capacity over the next 15 years, with a blend consisting mostly of hydroelectric and geothermal plants but potentially using wind and tidal energy as well.

By Lowana Veal
In the northwestern Icelandic town of Isafjordur, milk is causing pandemonium. A local milk marketing board recently tested one farm’s milk for the presence of harmful chemicals. Dioxin, and dioxin-like compounds, were found to be present in amounts higher than the recommended maximum levels, threatening the future of local farmers, and angering residents.
Next Page »
ADVERTISEMENT ADVERTISEMENT