REYKJAVIK, Jul 27 2011 (IPS) - Down by the old harbour in Reykjavik, a small group of volunteers in pale blue T-shirts can be seen handing out leaflets that say “Meet us don’t eat us”. Beneath the slogan is a picture of a whale, followed by “Whales are being killed to feed tourists. Don’t let your visit leave a bad taste in your mouth.” 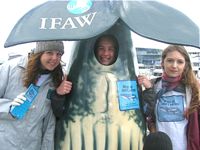 IFAW are conducting a campaign against eating whale meat because “we have noticed that in recent years, more and more restaurants in Iceland are putting whale meat on the menu, suggesting that it is being promoted to tourists. This has also been confirmed by feedback from the public,” says IFAW’s UK publicity officer Clare Sterling.

However, a Gallup consumption and lifestyle survey last year showed that only 0.9 percent of Icelanders eat whale meat on a weekly basis, 36.8 percent eat it less than five times a year, and 52.6 percent never eat it.

“In 2009 the University of Iceland, in conjunction with Icelandic whale watch operators Elding, carried out a survey of almost 1,500 tourists (1,474) on whale watching trips in Iceland. They were asked how many of them had tried whale meat (19 percent) and how many would consider trying whale meat out of curiosity (86 percent),” replies Sterling.

Currently “about 20 percent of whale meat goes directly to restaurants, the rest going to wholesalers,” says Gunnar Bergmann Jonsson from the Association of Minke Whale Hunters (AMWH), which supplies whale meat to the Icelandic market.

In March, IFAW decided to ask permission from the airport authority, Isavia, to put up an advertisement with similar wording to the leaflet at Keflavik, the international airport for Iceland. This was supposed to stand all summer, starting from the beginning of June. IFAW paid in advance for the hanging of the advertisement.

However, soon after the advertisement was put up, Isavia said that the organisation was asked to change the wording or take it down. They said that they had never seen or agreed the final text, and had received some complaints.

One of these was from Jonsson, the manager of AMWH. “I thought it was inappropriate for the authorities that run the airport building to hang up propaganda like this, especially as it is a state- owned building,” he told IPS.

Eventually the advertisement was taken down and the organisers were refunded. But the leafletting continues, with volunteers spending two weeks at a time in Iceland before being replaced by others. The volunteers come through the Icelandic voluntary organisation SEEDS.

“We talk to some of the people we leaflet,” says Elena from Canada. “We generally get good responses from the tourists, who say they are not interested in eating whale meat, but we get many negative responses from Icelanders.”

Leah, a volunteer from the U.S., added: “Since the campaign started, we have noticed that fewer restaurants are advertising whale meat outside their shops.”

The quota for catching minke whales this year is 216, but this target will not be reached. Halfway through the season, about 44 minke whales have been caught. “We never intended to catch the whole quota – we only catch for the market in question, which is Iceland,” says Jonsson. Sixty minke whales were caught in 2010, although the quota was much higher.

It seems that no fin whales will be caught in Iceland this summer, or at least not until August at the earliest. Kristjan Loftsson from Hvalur, the company that operates the larger whaling boats, blames the March earthquake and tsunami in Japan for his decision, saying that the market there has crashed as people no longer go out to eat in restaurants.

But the problems started before the tsunami. According to a survey carried out in Japan in 2010 by IKAN, the Iruka (Dolphin) and Kujira (Whale) Action Network, in conjunction with journalist Juniko Sakuma, Japan had around 6,000 tonnes of unsold whale meat in storage, although whale meat had become cheaper and less whales had been caught by the Japanese.

“It is not true that the whale meat stock increased after the disaster,” IKAN’s Nanami Kurasawa told IPS.