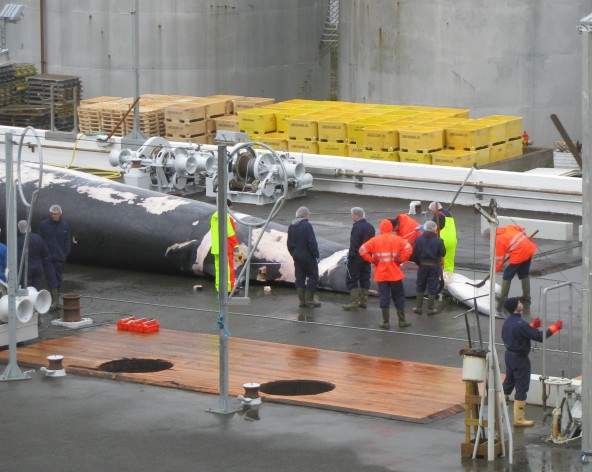 Workers start to dismember a fin whale at the whaling station in Hvalfjordur, about 45 km north of Reykjavik. Credit: Lowana Veal/IPS.

REYKJAVIK, Apr 14 2014 (IPS) - Posters with the words “Do you know who caught your seafood?” are now appearing on buses, trains and other venues in Boston. They are part of a campaign organised by a coalition of U.S. environmental groups called Whales Need Us, to draw attention to the links between Icelandic whalers and fish sold in the U.S.

A picture of a whale appears on the poster, together with the name of the website where those interested can find more information.

“The campaign has contacted retailers, wholesalers and the food service industry across the U.S. to let them know that American consumers do not want to buy seafood from whalers."

The groups decided to focus on Boston because the launch of the campaign mid-March coincided with the opening of the North American Seafood Expo at the Boston Convention Centre.  Supporters picketed the stall of HB Grandi, one of Iceland’s largest fishing companies, asking onlookers to stop trading with the company because of its links with whaling.

The expo is the largest seafood trade event in North America.

At the start of the protest, fish consumers were requested to ask their local food retailers and restaurants to verify that their seafood products did not come from a source linked to Icelandic whaling.

“The campaign has contacted retailers, wholesalers and the food service industry across the U.S. to let them know that American consumers do not want to buy seafood from whalers, and asking for their help,” says Susan Millward, executive director of the Animal Welfare Institute, one of the organisations behind the Whales Need Us campaign.

On Mar. 18, the last day of the three-day expo, Canadian-U.S. seafood company High Liner Foods (HLF) announced it would discontinue trading with HB Grandi because of its whaling connections. It had been trading with the Icelandic company since October 2013.

Since the end of the expo, U.S. companies Trader Joe’s and Whole Foods Market have severed ties with Rhode Island-based Legacy Seafoods, another company that imports substantial quantities of fish from HB Grandi.

HLF say they do not have any existing contracts outstanding with HB Grandi, and are committed not to enter into any new contracts with them until they have fully divested their involvement and interest in whaling.

“Even though HLF’s policy is strict on not doing business with suppliers directly involved in whaling, it has nothing to do with individuals or shareholders of HB Grandi. We have no control over the ownership of privately or publicly owned companies in HLF’s supplier base,” Elvar Einarsson from High Liner’s procurement division tells IPS.

At the end of 2011, High Liner bought Icelandic Group’s U.S. and Asian operations. Icelandic Group also agreed to a seven-year licensing agreement with HLF for the use of the Icelandic Seafood brand in North American countries until 2018.

“For HLF the marketing and sales of seafood from Iceland under the brand Icelandic Seafood is an important part of our business. There will be no change on HLF’s procurement from its other Icelandic suppliers and hopefully HB Grandi’s circumstances will change so they will be able to become one of HLF’s suppliers again,” says Einarsson.

Last September, Kristjan Loftsson from the whaling company Hvalur increased his family’s shares in HB Grandi from 10.2 percent to 14.9 percent. On the HB Grandi website, Loftsson is listed as chairman of the board.

At the time, there was obviously some concern over the repercussions that this could have. The fishing website Undercurrent reported “an Icelandic industry player” as saying: “Hvalur is Iceland’s only whaling company, and it’s increasingly a controversial activity. It’s obviously a risk to a company selling wild fish that their ownership is closely connected to whaling.”

Vilhjalmur Vilhjalmsson, CEO for HB Grandi, has stated publicly that he will not speak to the press on the company’s trade with High Liner Foods. In a short press release issued by his company, he is quoted as saying: “We agree with the government’s policy on sensible utilisation of natural resources and have nothing to do with what operations individual shareholders choose to practise or not practise.”

But Millward emphasises that they are not trying to attack Icelandic fisheries as such. “The campaign is in no way meant as an attack on Iceland’s economy and is geared only at those companies linked to the Hvalur whaling company,” she says.

In 2011, President Barack Obama issued diplomatic sanctions on Iceland as part of the Pelly Amendment. The Whales Need Us coalition has once again made use of this.

“The campaign has also urged the public to contact President Obama, and ask that he take targeted action against Icelandic companies connected to whaling by invoking the Pelly Amendment, a tool promulgated by the U.S. Congress as a means of compelling compliance with international conservation treaties,” Millward told IPS.

To an extent, this policy worked. Obama has said that he would invoke the Pelly Amendment and instigate a number of measures aimed at Iceland. But once again, these measures appear to be diplomatic rather than trade sanctions, although they are more extensive than before.

Coincidentally, Icelandic Social Democratic MP Sigridur Ingibjorg Ingadottir has just put forward a parliamentary proposal that calls for an investigation into the economic and trade repercussions for Iceland of whaling.

“The investigation will take into account both minke whales and fin whales,” she told IPS. “Are we prepared to sacrifice more for less, when there is growing opposition to whaling and Iceland is catching more whales than are deemed sustainable by the IWC [International Whaling Commission]?”

The IWC says that the annual sustainable catch for fin whales in the North Atlantic is 46, whereas Iceland has set a quota of 154.

Meanwhile, Loftsson and other Hvalur employees are becoming increasingly sensitive to outside criticism and have now removed the company phone numbers from ja.is, the Internet listing of Icelandic phone numbers.