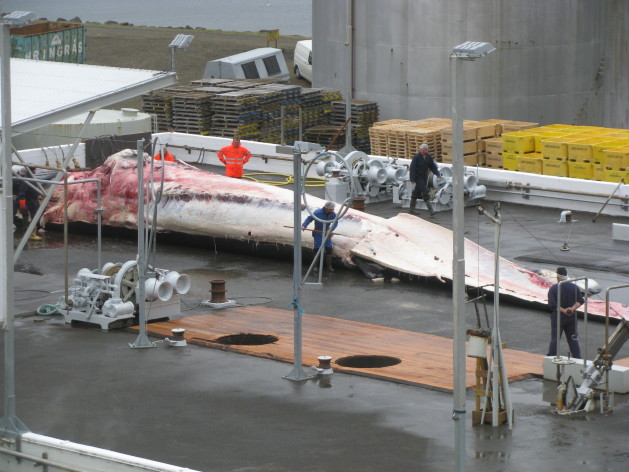 A fin whale killed and brought back to harbour in Reykjavik. Credit: Lowana Veal/IPS.

REYKJAVIK, Jun 24 2013 (IPS) - After a two-year break, Iceland has resumed its hunting of fin whales. But environmental campaigners outside of Iceland are doing their best to stop it.

In May a consortium of four environmental groups – the Animal Welfare Institute (AWI), the Environmental Investigation Agency (EIA), the Whale and Dolphin Conservation and the Japanese whale and dolphin conservation organization IKAN – sent out a press release concerning pet-food manufacturer Michinoku Farms, demanding a stop to the company’s production of dog treats made from dried fin whales of Icelandic origin.

The treats had appeared on the company’s website earlier this year.

The publicity worked. Michinoku director Takumo Konno announced within hours that the dog treats would be withdrawn from sale, as although they were legal in Japan he did not want to hurt anyone’s feelings.

Earlier in May, a coalition of American animal welfare and conservation groups, including the AWI and EIA, called on the Obama Administration to impose economic sanctions against Iceland because Iceland had resumed whaling.

Previously, in September 2011 at the end of Iceland’s last whaling season for fin whales and at the instigation of 19 American NGOs, Obama decided to impose diplomatic sanctions against Iceland because of the country’s whale-hunting activities. But the groups say that stronger measures are now necessary.

“Given the decision to resume fin whaling in Iceland, we believe that it is now absolutely clear that these diplomatic efforts have failed to achieve their goal,” the groups said in the letter to the Secretaries of State, Commerce and Interior.

As yet, trade sanctions have not been imposed.

The global Internet campaign group AVAAZ started a petition in late May, addressed to Dutch Prime Minister Mark Rutte, to try and stop Icelandic whale meat from entering Dutch ports on its way to Japan. The aim was to get one million signatures.

AVAAZ achieved their target, and presented their petition to the Dutch State Secretary for Economic Affairs, Sharon Dijksma. The result was that she promised to work with the Rotterdam port authorities to stop the transfer of whale meat. She announced she would liaise with European counterparts to develop a comprehensive European code of conduct.

Anti-whaling pressure has also been mounting within Iceland. Two women, who happen to be granddaughters of one of the founding members of the whaling company Hvalur and who now sit on the board of the company, have publicly spoken out against Hvalur’s whaling activities.

At the company’s annual general meeting on Jun. 1, one of the women, Audur Kristin Arnadottir, called for the company to be split into two, as the whaling section did not pay because of international restrictions on whale meat. Arnadottir’s proposal was an amendment to a proposal by another shareholder to disband the Hvalur company completely. Although neither proposal was passed, it seems there is some degree of dissent within the company.

Audur’s sister, Birna Bjork Arnadottir, wrote an opinion piece in the free newspaper Frettabladid in early June in which she explained that she had originally been pro-whaling but had now changed her mind. She said that one probable reason for the decreasing popularity of whale meat consumption in Japan was the campaigns of anti-whaling groups.

According to the Iruka & Kujira Action Network (IKAN), Icelandic whale meat constituted 26 percent of the market in Japan in 2012 and is sold at a bargain price. Kristjan Loftsson, owner of Hvalur and the main protagonist behind its whaling activities, had previously attributed the suspension of whaling for two years to a decline in whale meat sales, caused by a change in Japanese eating patterns after the 2011 earthquake and tsunami.

But in her newspaper article, Birna Arnadottir said that some whale meat from the 2009-2010 seasons, when whaling resumed, is still stored in freezer storage facilities in Japan. Commercial hunting of fin whales resumed in June 2009.

Hunters of minke whales are also facing opposition within Iceland. On his last day in office a month ago, outgoing minister of industry Steingrimur J. Sigfusson extended the sanctuary area of Faxafloi Bay (near Reykjavik) in which minke whaling is not allowed. This means that minke whalers have lost 80 percent of their main hunting area, so are resorting to other areas as well.

“The change has had a very negative effect on our operations. But we expect the new minister (for agriculture, fisheries and the environment) to change the legislation back again immediately,” said Gunnar Bergmann Jonsson from the Association of Minke Whale Hunters (AMWH).

Kjartan Sveinsson from the company Seawatching, which runs seal-watching boat trips from Hvammstangi, 200 km north of Reykjavik, complained a week ago that minke whale hunters were disturbing the seals and their pups in the area. But this happened only once.

“We talked to them and they were very good about it. They haven’t been near us since,” he told IPS, adding that the conflict had been over how far they were from the seal colony.

The AMWH announced later that day that two minke whales had been caught off Hvammstangi. Jonsson says they will continue their operations in the north, at least for the time being.

The International Fund for Animal Welfare (IFAW) has just launched its ‘meet us don’t eat us’ campaign in Reykjavik against minke whale hunting, for the third year running. Sigursteinn Masson from IFAW says the campaign has had a decisive impact.

“A survey carried out aboard whale-watching ships in 2009 showed that up to 40 percent of tourists tasted whale meat while in Iceland. In a survey IFAW did last summer, the proportion had dropped to 22 percent,” he told IPS, adding that this tallies with the number of minke whales caught in those years – 81 in 2009 but 52 in 2012.

“We are now beginning a campaign called Whale Free Restaurants. The nearly 200,000 tourists who are expected to engage in whale-watching in Iceland this year are encouraged to go to one of these restaurants, which are places that promise not to sell whale meat.”

The Hvalur 8 boat has just returned to Iceland after catching 11 fin whales. The quota for the season is 154, although the annual quota has never been reached since commercial whaling resumed in 2006.