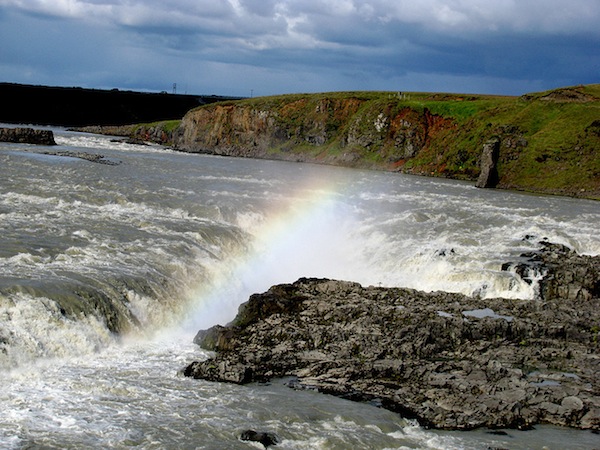 Hydro plants on the Lower Thjorsa, above, could potentially provide energy for a new aluminium smelter. Credit: Lowana Veal/IPS

REYKJAVIK, Jun 9 2013 (IPS) - The new Icelandic government was only a day old when it announced in mid-May that it would do all it could to push ahead with the Helguvik aluminium smelter. Construction for the smelter began in in 2008 but since then has met with a variety of problems, mostly energy-related.

Critics of the project say that too many aspects of the project still remain unresolved and allege that the rush to build the smelter is a corporate tactic to draw Iceland’s government into developing infrastructure that it will be forced to continue supporting, to the detriment of the country’s protected areas.

Environmental concerns, meanwhile, were nearly inconspicuous during election campaigns, and on May 1, a few days after election results were announced, a Green March tagged along behind the trade unions’ march to remind political parties that the election had been won on a platform of cutting taxes and slashing home loans rather than on building new aluminium smelters.

The Green March focused on environmental issues and specifically the fact that the new government had no mandate to build more aluminium plants – which consume large quantities of energy and produce pollutants such as carbon dioxide and perfluorocarbons – or power plants.

Yet the day before the April 27 elections, Michael Bless, the head of Century Aluminium, which owns the plant, said he was optimistic a new government would ensure that development of the Helguvik plant could continue in earnest.

The governmental agreement issued two weeks ago by the winning Independence Party (IP) and Progressive Party (PP) emphasised that conservation and utilisation could proceed hand-in-hand.

The environment section began, “Clean renewable energy…offers great marketing opportunities that could lay the base for increased exports and a stronger image of the country.”

As Iceland’s geothermal and hydro energy is seen as renewable, a previous environment minister, Siv Fridleiksdottir, justified building the Karahnjukar dam and Fjardaal aluminium plant by saying that building energy-sucking aluminium plants in Iceland, where the energy is clean and renewable, was preferable to building them where they would run on dirty energy.

The new minister for industry, Ragnheidur Elin Arnadottir, comes from the constituency which houses the partly built Helguvik smelter. It also has the highest unemployment rate in the country, and the municipality sees the smelter as a potential source of employment. She is keen for the project to go ahead.

Arnadottir told IPS that she is looking into possible incentives from the government side to facilitate the project, including possible state aid for various aspects of infrastructure such as road building and harbour expansion.

But the main stumbling block is still the lack of energy needed to fuel the plant and the price that Century Aluminium is willing to pay for the electricity, especially with the current global price of aluminium at rock-bottom.

Until a few years ago, aluminium companies in Iceland paid very little for electricity, as they consumed so much electricity and their operation was considered good for the economy.

But times have changed, and now energy companies are demanding higher prices for the electricity they produce.

The environmental impact assessment for Helguvik assumed a total capacity of 250,000 tonnes of aluminium produced annually, although ideally Century would like the smelter to produce 360,000 tonnes to be more cost-effective.

Energy for the plant was supposed to be provided by the regional heating company HS Orka and capital city-based Orkuveita Reykjavikur (OR) and sourced from geothermal plants, none of which have been built yet.

New pollution regulations for hydrogen sulphide (H2S), which is produced by geothermal plants, will also mean that at least one of these plants cannot be built until H2S emissions can be contained.

Despite these plans, Ketill Sigurjonsson, an energy specialist from the energy consultancy firm Askja Energy Partners, says that geothermal plants will probably be too expensive for an aluminium smelter.

“There may be some options in low cost hydropower, but it is still unclear if these will be enough to provide a full-sized aluminium smelter with sufficient electricity,” he said.

Earlier this year, the Icelandic government approved the Master Plan for Hydro and Geothermal Resources, which categorises all potential hydro and geothermal power plants into three categories: utilisation, meaning the plant faces no obstacles for development; pending, meaning more research is needed; or protection, meaning development is not allowed.

But in late May, Sigurdur Ingi Johannsson, the minister for fisheries, agriculture and the environment, announced that he had ordered a review of the plan, with the aim of moving some of the plants from the pending category, such as the hydro plants in the Lower Thjorsa River, into the utilisation group.

These plants could potentially provide energy for Helguvik or other large-scale industrial projects, such as a silicon factory. But Johannsson’s statement has caused unrest amongst environmentalists, some of whom have campaigned to save the Lower Thjorsa from development.

Arni Finnsson, from the Iceland Nature Conservation Association, has strong views on the matter. “Century Aluminium has conducted its business in a totally irresponsible manner with regard to a new smelter in Helguvik,” he said.

“Without having secured any energy at all for a new aluminium smelter…it started building the smelter, apparently in order to put pressure on politicians who are sensitive to high unemployment rates, for them to deliver the energy,” Finnsson told IPS.

“To build a smelter of 250-360,000 tonnes a year would require major destruction of valuable nature areas,” he added, pointing out that both local and national energy companies would have to draw on energy from several projects that had not yet been designed or planned.

“Century Aluminium’s plan is to start the smelter with some 180,000 tonnes a year and then force the Icelandic government to provide more energy against a threat of decommissioning the plant,” he explained.

“Iceland would have to build power plants in areas which are currently protected or have been slated for protection,” he concluded.