REYKJAVIK, Jun 19 2011 (IPS) - Public health authorities in Reykjavik have criticised plans for the expansion of the Hellisheidi geothermal power plant. They say that levels of the gas hydrogen sulphide could increase by 40 percent if a new geothermal field, Grauhnukur, is developed and nothing is done to ensure that the levels of the gas remain below maximum permitted levels. 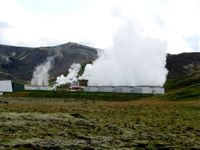 The Hellisheidi plant is about 30 km east of Reykjavik and was opened in September 2006. Since then, it has been expanded three times. Until December 2010 it was only used to generate electricity, primarily for the Century aluminium plant in Grundartangi, West Iceland, but now it is also used for domestic heating.

“Electricity from the expansion in autumn will go to the Grundartangi aluminium plant, and conceivably to the Century aluminium plant at Helguvik in Southwest Iceland, if that plant is ever completed,” informs Eirikur Hjalmarsson, Communications Director at the plant’s operators, Orkuveita Reykjavikur (OR).

One of the byproducts of geothermal energy is hydrogen sulphide (H2S), a gas that is emitted in the steam from geothermal plants and is often described as smelling of rotten eggs.

In California, the limit for H2S has been put at the level at which people notice the smell from it. This was discovered to be 42 micrograms per cubic metre, averaged over an hour.

An environmental impact assessment (EIA) was produced for the proposed borehole at Grauhnukur but has been heavily criticised by the Reykjavik Public Health Authority (RPHA).

Although monitoring of H2S has occurred for several years around Reykjavik at stations operated by three public bodies, RPHA say that no mention is made of these figures in the EIA. Only predictions calculated from a model situation are given in the report – yet RPHA say that at one monitoring station, Hvaleyraholt, the actual yearly average in 2009 was 2.4 times above the predicted figure in the EIA.

Since the Hellisheidi power plant began operating in 2006, on a yearly average the amount of sulphur in the atmosphere has increased by up to 140 percent above the forecasted level of H2S in the EIA, according to measurements taken at Hvaleyraholt on the outskirts of Reykjavik.

RPHA also say that the EIA only gives predicted figures in the vicinity of the actual plant, where no one lives, while the easterly prevailing wind frequently carries H2S towards the capital city of Reykjavik.

The levels of H2S started to increase as soon as the Hellisheidi plant went on line. Iceland’s Environment Agency is one of the bodies that routinely records levels of air pollutants in Reykjavik. Between February 2006 and February 2007, before and after the Hellisheidi plant went on line, the level was exceeded 48 times for varying periods of time. Of these, 45 measurements were taken after Sep. 1, 2006.

Hydrogen sulphide is known to cause eye irritation in high concentrations, along with breathing difficulties. But little is known about chronic health effects of long-term exposure at lower concentrations.

However, Ragnhildur B. Finnbjornsdottir from the Environment Agency’s environmental quality department carried out a preliminary survey last year as part of her master’s degree and found a possible connection with some heart patients. “A 4.5 percent increase occurred in the dispensation of vasodilator drugs on the same day that the pollution occurred and also three to four days after the pollution peak, up to 2.5 percent and 4.3 percent respectively, based on a 24-hour average for H2S,” she told IPS.

Most of the drugs in this class are consumed on a continuous basis, but the class also includes drugs that are taken when acute cardiovascular events occur.

“But because this was only a preliminary study, these figures can only be seen as indications,” she added.

PhD student Hanne Krage Carlsen, from the University of Iceland’s Centre of Public Health Sciences, carried out a similar study to Finnbjornsdottir’s but looked at the use of asthma drugs. She found a positive correlation.

“When the three-day average of H2S in Reykjavík increased, the sales of prescription asthma medication to adults increased three to five days later, suggesting that some asthma sufferers had more symptoms – causing them to need more medication – so they had to fill their prescriptions a little sooner than they would have otherwise done,” she said.

Last year, Iceland’s environment minister, Svandis Svavarsdottir, responded to public pressure and set a regulation on H2S levels in the atmosphere. The WHO level is 150 micrograms per cubic metre per day, but that is aimed at reducing acute eye irritation.

Because so little is known about the effects of long-term exposure, Svavarsdottir decided to set a much lower limit, 50 micrograms per cubic metre per day. Until July 2014, this limit may be exceeded five times per year, but after that time not at all.

Last year, the limit was exceeded twice, according to Anna Rosa Bodvarsdottir from RPHA.

Technically speaking, it is possible to reduce H2S substantially using new equipment, and in fact operating permits for industries that cause pollution by H2S are obliged to use BAT – best available technology.

But this is extremely expensive, and creates unwanted products such as pure sulphur, sulphuric acid and gypsum. Instead, OR are testing a new process that is designed to capture the H2S in the steam and pump it back into the system.

“OR has committed itself to cleanse the H2S from Hverahlid power plant and intends to keep the exhaust from Hellisheidi power plant within the limits of the regulation,” replies Hjalmarsson.