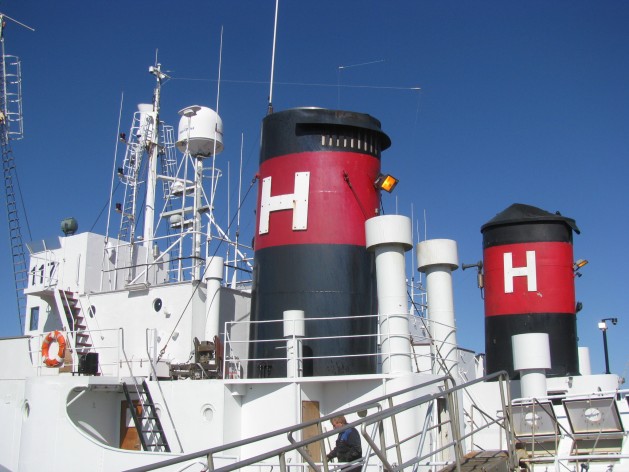 REYKJAVIK, Aug 18 2014 (IPS) - Although fin whaling by Icelanders has encountered increasing opposition over the last year, Icelandic whaling boats headed off to sea again in mid-June for the first hunt of the summer and by August 14 had killed 80 fin whales.

The story of what then happens to the whales once they have been taken back to Iceland is part mystery and part an economic balancing act between the country’s economic interests and its international image.

As soon as the whales are landed in Iceland, work begins on dismembering the whales. But does the meat get sold and where? How much money does it bring in for the Icelandic economy? And are the costs involved more than the revenue?

All of the whale meat is sent to Japan, but Hvalur hf, the only Icelandic company that hunts fin whales, has encountered a great deal of resistance in transporting it there and has had to resort to commissioning a ship to take the meat directly from Iceland to Japan, undoubtedly leading to extra costs.

IPS was unable to find out the fate of the fin meat sent to Japan earlier this year. Two months after arriving at its final destination, a Japanese source, who did not want to be named, told IPS: “My colleague told me that the whale blubber is still in the cold storage of Osaka customs.” The Japanese embassy in Reykjavik acknowledges that there is at least some sale of fin whale meat, but actual figures do not seem to be available.

Earlier this year, a group of North American animal rights and environmental groups started to pressure North American companies to stop buying fish from Icelandic fishing company HB Grandi because of its links with Hvalur hf. Almost immediately, the Canadian/U.S. company High Liner Foods said it would no longer buy fish from HB Grandi and a number of other companies followed suit, including the U.S. health food chain Whole Foods.

The campaigners also called on U.S. President Barack Obama to invoke the Pelly Amendment, which allows the President to embargo any and all fisheries products from countries operating in a way that undermines a conservation treaty – in this case, the International Convention for the Regulation of Whaling.

Obama decided to invoke the Amendment, and has already implemented one albeit diplomatic rather than economic action, which was not to invite Iceland to the large international “Our Ocean” conference hosted by the United States in June.

Besides the well-known Pelly Agreement, there is also the Packwood-Magnuson Amendment of the Magnuson-Stevens Fishery Conservation and Management Act, which allows the President to block foreign fleets from access to U.S. fisheries if their country is deemed to have diminished the effectiveness of an international conservation programme.

In 1984, Iceland and the United States signed an agreement whereby Iceland would obtain fishing permits in U.S. waters if it agreed to stop whaling. Due to various complications, although Iceland stopped whaling for 20 years in 1986, it did not start fishing in U.S. waters until December 1989 and then only caught a few tonnes of fish.

In spring this year, Social Democrat MP Sigridur Ingibjorg Ingadottir and seven other Icelandic opposition MPs tabled a parliamentary resolution calling for an investigation into the economic and trade repercussions for Iceland of whaling.

“There are two main aspects to the proposal. One concerns the economic and trade interests of the country and the second Iceland’s image on an international scale,” she told IPS.

According to a report published in 2010, “In the years 1973-1985, when Hvalur hf pursued whaling of large cetaceans, whale processing usually stood for about 0.07 percent of GNP. The contribution of whaling itself to GNP is not known.” Minke whaling is not included in these figures.

Ingadottir, who trained as an economist, says that this figure is very low. “At that time, whaling was an industry and pursued systematically. Since then, a range of other large industries and commercial enterprises have sprung up, so the figure is likely to be lower,” she notes.

Gunnar Haraldsson, Director of the University of Iceland’s Institute of Economic Studies and one of the authors of the 2010 report, told IPS: “The problem is that no official figures exist on the returns of whale watching and various other parameters, thus there is a need to collect this sort of data specifically. It is therefore necessary to carry out a new study if we want to know what the national gains (and costs) actually are.”

Whale watching has blossomed over the last few years and at least 13 companies run whale-watching trips from various places around Iceland. Between 2012 and 2013, the number of whale watchers increased by 45,000, and the total number is now around 200,000 annually.

Three MPS had also called for an inquiry into whaling in the autumn of 2012. This was supposed to cover overall benefits to the economy, including economic interests, animal welfare issues and international obligations. A committee was set up to look into the organisation and grounds for whaling, but this petered out.

“The committee has not actually been dissolved, but it hasn’t met since the new government took over (in May 2013],” Asta Einarsdottir from the Ministry of Industries and Innovation told IPS. When asked why the committee had not met, Einarsdottir replied: “The Minister has not had a chance to meet with the Chair of the committee, despite repeated requests.”

Einarsdottir said that the committee was quite large and included representatives from the whale-watching and conservation sectors as well as from the whaling industry and various ministries.

Last year, however, the chain decided not to brand the lamb as Icelandic because Iceland’s whaling activities had given Iceland a bad name. The expected increase in sales did not occur, and considerable pressure had to be applied to persuade them to keep selling the meat at all.

Ingadottir is forthright in her opinions. “Are they damaging our interests? Are they protecting a narrow group of interests rather than the national interest? What are we actually protecting with this whaling?” she asks, adding: “Iceland has to come up with very good reasons for pursuing whaling in order to continue doing it.”