REYKJAVIK, Jun 13 2014 (IPS) - Although most of Iceland already uses renewable energy for its heating and electricity, a handful of places are still reliant on oil. But, at least on Grimsey island in the north, this could change in the future.

Grimsey has a population of 90 and currently uses about 200,000 litres of oil annually for district heating and electricity. Located 40 km off the northern mainland, it would be difficult and expensive to provide these essential needs via a pipeline.

A number of alternative solutions have been suggested over the years and one of these involves the use of wind energy. One of the researchers involved in the project, Daniel Chade from the University of Strathclyde in Scotland, described how the scheme would work.

“Initially, wind turbines could be placed on Grimsey, which would support diesel electricity generation. Subsequently, a hydrogen storage system could be added to increase efficiency of the system. At this stage of the project development, around 90 percent of energy should be produced from renewables,” he said.

“In general, the wind-hydrogen system is also adaptable for other remote communities. For example, all northern parts of the globe are characterised by an excellent wind potential” – Daniel Chade, researcher at the University of Strathclyde in Scotland

While Chade believes that it is not a good idea to stop using diesel generators completely because it would not be very cost effective, he said: “However, in the future, oil prices will probably rise and renewable technology costs will decrease. Then I believe application of a 100 percent renewable energy system without a diesel generator should be feasible.”

Can the technique be used elsewhere in the world? Yes, said Chade, adding: “In general, the wind-hydrogen system is also adaptable for other remote communities. For example, all northern parts of the globe are characterised by an excellent wind potential.” He noted that that in Alaska, for example, there are around 200 places where diesel generators are used and in Canada about 300 remote locations rely on diesel generators.

“In some of them,” Chade added, “energy prices are higher than on Grimsey so, from an economic perspective, application of wind turbines with hydrogen energy storage should also be feasible there.”

Batteries are often used to store excess energy, but these only have a storage capacity of a few days. Hydrogen, however, can store energy for weeks or months.

“Nowadays, most of the available storage technologies are suitable for a maximum of a few days storage. In the case of hydrogen it can be stored over months, which is advantageous for Grimsey due to the seasonal wind variations. For example, some of the hydrogen produced during winter months from excess electricity might be used during summer when the wind potential is much lower,” Chade told IPS.

The above scenario only deals with electricity production, not district heating. Hydrogen can, in fact, be used for district heating as well, but more research needs to be done on the heating needs of Grimsey islanders before this is developed further.

Woodchips, however, are an option for district heating in Grimsey, which Runar Isleifsson from the Icelandic Forestry Commission is investigating.

“We have investigated whether it is practical and technically feasible to use wood pellets or woodchips to heat residential and industrial premises in Grimsey,” he told IPS.

“One of the main provisos is to use waste heat from the diesel plants that produce electricity for the island. These provide around 40 percent of what is needed. According to our calculations, this should be feasible and pricewise is very competitive with heating using traditional electricity (produced using hydropower) which is not available on Grimsey,” Isleifsson explained.

“Woodchips appear to be more practical than wood pellets,” he added.

Asked whether he thought that the wind energy system could be used in conjunction with woodchips, Chade said: “I think that he [Isleifsson] has a good idea. However, I believe that the heat from diesel generators that he proposes using might be substituted by the heat which would be generated by a wind turbine/hydrogen system. In such a case, his idea could be implemented together with our system.”

Meanwhile, in the capital Reykjavik, engineers from the EFLA company, the National Energy Authority and Iceland Drilling have been looking into the use of heat pumps to heat buildings in “cold” areas elsewhere in Iceland.

They say that up to four times as much energy can be produced from a given heat source, even in what might normally be considered unfavourable conditions.

For instance, even if it is cold outside, “absolute zero” – the point where no heat energy remains in a substance – is -273 °C, so a temperature of 0 °C will still contain considerable energy. Coupled with the use of special liquids which will boil at 0 °C, energy can be amassed from the outside air and used for domestic heating.

The energy produced is more than that needed for operation of the heat pump.

Heat pumps are of course not a new invention, but they have not seen much use in Iceland and it is difficult to predict how much energy they will produce because conditions in Iceland vary from place to place. 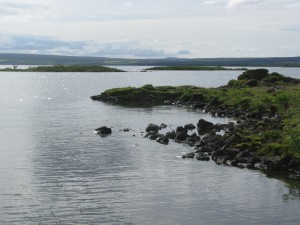 This is what mechanical engineer Heimir Hjartarson has tried to clarify. He and his colleagues have looked at different places where heat pumps could be used.

“We at EFLA have collaborated in pilot projects where a water-to-water heat-pump system has been installed in a summerhouse close by Lake Thingvallavatn and also an air-to-water heat pump on the Snaefellsnes peninsula in West Iceland. The findings from these projects were that the electric energy for heating could be reduced to nearly 25 percent of what it was before installation,” Hjartarson explained.

A heat pump is now used to heat the swimming pool, school and sports complex in the town of Kirkjubaejarklaustur in South Iceland. These had been heated using waste heat from a waste incinerator, but the incinerator was closed down in December 2012 due to excess levels of dioxin and other pollutants. Use of the heat pumps has cut the cost of heating the pool with hydropower-produced electricity by two-thirds.

Gudmundur Ingi Ingason, Chair of the District Council for the Kirkjubaejarklaustur area, says that the heat pumps have worked very well. “We had already started using two heat pumps in the community centre, which were very effective, so we decided to buy some for the swimming pool as well after the incinerator was closed down. These are air-to-water heat pumps which take air from the atmosphere to heat the pool – like a fridge, but in reverse,” he explains.

According to Hjartarson, heat pumps are actually very suitable for heating swimming pools when no geothermal energy is available, because the heat obtained from each kilowatt is multiplied. “We have been looking into a system in which you only need to heat up water by about 2 °C [before it is pumped out into the pool again], which is very suitable for heat pump systems,” he concluded.