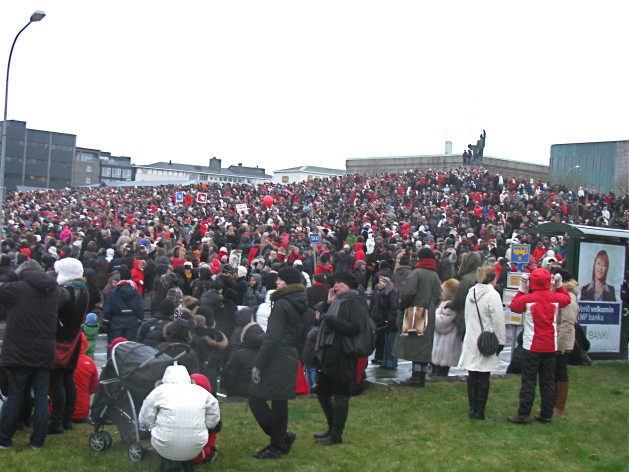 Women gather at a rally in Reykjavik to mark victory for their rights, but remain more vulnerable than men to the economic crisis. Credit: Lowana Veal/IPS.

REYKJAVIK, Nov 17 2013 (IPS) - Women in Iceland have been more badly affected by the economic collapse in 2008 than their male counterparts, both in terms of physical and mental health, studies show.

In one study carried out this year on people interviewed both before and after the financial crash, unemployed women, female students and women not active in the labour market showed particularly high stress levels in the year following the crash, along with women nearing retirement age (67 in Iceland) and non-skilled women.

“Most research on people who have experienced economic setbacks has been directed at men, and yes, those who have studied both sexes have found that men are more affected than women. Our results of the effects of the economic collapse are unusual, i.e. the effect on mental health appears to be primarily on women,” Unnur Anna Valdimarsdottir from the Centre of Public Health Sciences (CPHS) at the University of Iceland tells IPS.

“Stressful events have been shown to have, if anything, more effect on heart diseases of women than men, and it is possible that different stressors could be gender-specific."

“Women have been more affected by the economic collapse and subsequent recession in Iceland than has been publicized, or seen in other countries,” says Chris McClure, a PhD student at CPHS.

“Most research to date indicates men being affected the most. However, what has occurred in Iceland is unique and may be an indication of a number of factors, including the high psychological burden of Icelandic women to maintain the household, their employment, their relationships, and their families.”

McClure points out that so far very few media releases have highlighted the negative consequences of the collapse in Iceland. Instead, most have focused on the resilience of the population.

“Statements like these, during times of austerity measures, can cause negative effects on the population moving forward,” he says.

Vulnerable groups are more prone to stress, say the authors. For instance, women over 60 might have experienced greater job insecurity or the prospect of their pensions or life savings disappearing, as well as the uncertainty of finding work if they are made redundant.

With non-skilled workers, the prospect of being in an occupation in which they are easily disposable or lacking credentials to get another job could have led to increased stress.

Previously, research studies on the relationship between unemployment and psychological outcomes had generally focused on men, but in some of these the societies studied were those in which men were the typical breadwinners for the family.

This is not the case for Iceland. With one of the highest employment rates among the Organisation for Economic Cooperation and Development (OECD), a grouping of 30 wealthy countries, women in Iceland represent almost 80 percent of the workforce, almost the same as men (85 percent).

Financial and occupational losses during the weeks around the financial collapse represented a great threat to family security, and this may have affected women differently to men. The authors attribute this as one of the reasons for the difference.

But it is not just stress-related diseases that affect women more than men in Iceland. In the week that the banks fell, the number of women who visited the cardiac emergency department of the national university hospital, Landspitali, shot up by 40 percent, while the number of women who were diagnosed with heart-related diseases increased by 80 percent.

Valdimarsdottir is one of the people who have looked into this. “Stressful events have been shown to have, if anything, more effect on heart diseases of women than men, and it is possible that different stressors could be gender-specific,” she says.

“For instance, there is a stress-related condition called stress cardiomyopathy (broken heart syndrome) which is virtually only found in women. But this is non-fatal and usually lasts only a few days,” she points out.

She and her colleagues at CPHS are also looking at trends surrounding birth outcomes, as well as suicide attempts and more long-term health outcomes in both sexes which could conceivably be related to the crash.

McClure also says that in Iceland the prevalence of smoking is higher in women than men. “Our findings point to a strong link between smoking cessation and stress levels. Moreover, we found that women, compared to men, were much less likely to quit smoking following the collapse, which is linked to their stress levels.”

Figures from the Directorate of Health show that the number of abortions has risen since the bank crash. However, Hildur Bjork Sigbjornsdottir, who compiled the figures, told IPS that it is impossible for her to pinpoint the reasons for these, as often there is more than one reason for the decision. “Usually, though, it’s a combination of various social factors.”