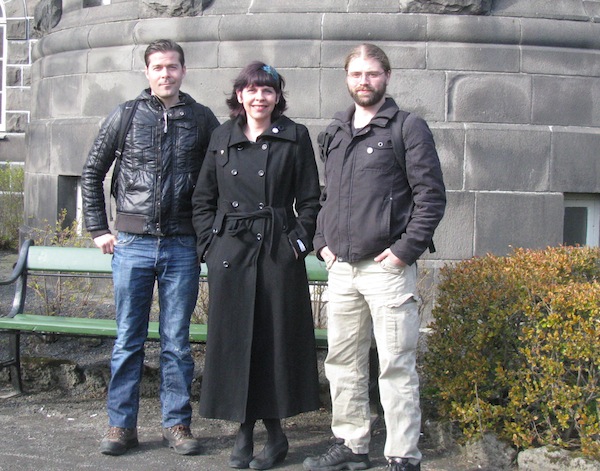 REYKJAVIK, May 6 2013 (IPS) - With an unprecedented number of political parties contesting Iceland’s latest elections, Icelanders are discovering that if they are passionate about a particular issue, they need simply to find like-minded people and establish a political party.

Iceland’s population is just under 323,000. Yet fifteen parties took part in the latest elections on Apr. 27 for a total of 63 seats. Part of the reason for the increase in political parties was a growing discontent with the “Big Four” parties.

These include the ruling Social Democratic Party (SDP) and Left-Green Party, which together had imposed cuts in public spending due to demands from the International Monetary Fund. There are also the Progressive Party (PP) and Independence Party (IP), widely regarded as responsible for the financial crash in 2008 and frequently accused of filibustering during the last parliamentary session.

Four of the new parties contested only a few constituencies. Activist Sturla Jonsson, for instance, created the Sturla Jonsson party to support people who were in danger of losing their homes or vehicles and to inform them of how they could use Icelandic legislation to fight the authorities.

Another, Birgitta Jonsdottir, decided to start a Pirate Party in the spirit of the international Pirate Party movement, which emphasises transparency in government dealings and finances. The risk paid off, and three members were elected – the first time the Pirate Party has won seats in a national election.

Jonsdottir was elected to the Althingi, Iceland’s parliament, in 2009, following demonstrations in January of that year that brought down the right-wing government in power at the time and seen as responsible for the crash.

Despite gains by these parties, generally more progressive, one area in Iceland that is still likely to suffer following the 2013 elections is the environment.

The largest parties in the new Althingi are still those responsible for the development of the Karahnjukar power plant and associated Alcoa aluminium smelter prior to the bank crash in October 2008.

In a recent survey carried out by Gallup for the conservation organisation Landvernd, 51.3 percent of respondents said they were against the construction of new aluminium plants. Only 30.9 percent were in favour.

The head of Century Aluminium, Michael Bless, said last week that he was optimistic a new government would ensure that development of the proposed aluminium plant at Helguvik in southwest Iceland could continue in earnest.

This plant was originally scheduled to begin operating in 2010 but has suffered a number of setbacks, mostly to do with the provision of power.

It is also unlikely that the new Althingi will spare the ecologically sensitive Lake Myvatn in north Iceland and will instead continue to develop the nearby Bjarnarflag geothermal plant, which will damage the lake and flora and fauna within and around it.  It could cause health problems for those living nearby.

The question of EU membership

With the Social Democratic Party, the main party that had pushed for accession to the European Union, suffering a resounding defeat in the elections, the future of EU negotiations is uncertain.

However, opinion polls show repeatedly that while Icelanders generally feel that Iceland is better off outside of the EU, the majority of the population want negotiations to continue and to be given the opportunity to vote on the matter in a public referendum.

The right-wing Independence Party voted at its last national meeting to halt EU negotiations completely, but some candidates have publicly stated that they feel this decision goes too far.

“We should have a referendum to find out whether or not Icelanders want to continue EU negotiations,” says Valgerdur Gunnarsdottir, one of the new Althingi members for the IP, emphasising that this is her personal view.

The other large party, the centre-right Progressive Party, is also against continuing EU negotiations, although it says that a referendum should be carried out before halting them.

PP members have been given the role of forming a ruling coalition and have publicly stated that they will not back down from their election promise of using funds recovered from hedge funds and other foreign creditors to slash mortgage debts by 20 percent.

They are currently undergoing formal discussions with the IP to reach this goal, but if this task proves too difficult, they will talk to other parties instead.

Critics have said that the measures proposed by the PP and IP would lead to another crisis in the Icelandic economy.

Thorvaldur Gylfason, a university economics professor and founder of the Democratic Watch party, one of the new parties in the recent election, criticised the IP during a television interview on the eve of the elections. He fervently hoped that the PP and IP would not be in a position to privatise the banks once again.

He later told IPS, “There is no way that the Independence Party and Progressive Party can stand by their promises, especially if they are carried out at the same time.”

Before the election, critics had pointed out that these parties’ promises would benefit only the wealthy. Others are concerned about how the environment will fare.

The Green March at the end of the May 1 trade union demonstration aimed at reminding new politicians that election campaigns were mostly centred on reducing home loans and cutting taxes and that no authority was given to build new power plants with ensuing environmental destruction.

Still others worry whether the new constitution written by Gylfason and 24 others two years ago will be passed. Before the Althingi dissolved prior to elections, ten weekly demonstrations were held to pressure the body to pass the constitution.

These demonstrations were initiated by Hordur Torfason, instigator of the protests that brought down the Icelandic government in January 2009.

Asked whether he envisioned these protests continuing, Torfason told IPS, “Various options are in the pipeline and will come to light in due course.”

The new parliament will have two fewer women in its ranks, bringing the proportion of women down from 42.8 percent to 39.7 percent.