REYKJAVIK, Dec 15 2008 (IPS) - The disastrous state of the Icelandic banking system means that Icelandic energy and aluminium companies can no longer find willing overseas lenders as before. 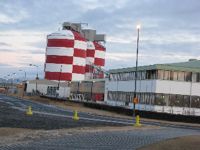 Development at the Straumsvik aluminium plant is on hold. Credit: Lowana Veal

Among new developments affected is the main aluminium plant at Helguvik in south-west Iceland. After much controversy and an appeal, permission was given in March 2008 for a smelter with a production capacity of 250,000 tonnes a year.

Construction has begun, even though energy supply for the plant was not finalised.

The smelter was supposed to be funded by the Icelandic banks Kaupthing and Landsbanki, along with the Dutch bank Fortis. They have all landed in difficulties because when foreign loan authorities shut off international loans, credit lines to these banks also closed. This has led to a search for other sources of funding overseas.

But that is being offered on condition that the plant is built in four stages, each with a capacity of 90,000 tonnes to a total capacity of 360,000 tonnes.

The Social Democratic Alliance, in a ruling coalition with the conservative Independence Party (conservative), is against the new proposal.

Environment minister Thorunn Sveinbjarnardottir has held meetings with managers from the firm Century Aluminium over the proposed changes to the Helguvik plant. Her political advisor Anna Kristin Olafsdottir told IPS that the minister “doesn’t want to comment on the meeting with Century. However, it is clear that the smelter in Helguvik will be much larger than previously assumed, and will need a new environmental impact assessment.”

Meanwhile, construction is continuing at the smelter, but slowly. There is no more overtime work.

And, there are further complications. Energy for the plant was partly expected to come from the geothermal plant Hverahlidarvirkjun, which has been given the go-ahead, but has not gone beyond that. The plant will be run by the company Orkuveita Reykjavikur (OR).

Overseas funding for this plant too is proving difficult to find. “The board and owners agreed a loan from the European Investment Bank for developments on Hellisheidi, including Hverahlidavirkjun, in early October,” says PR spokesperson Eirikur Hjalmarsson. “However, delivery of the loan has been delayed because of the general uncertainty of the Icelandic economy.”

Will this affect the building of Helguvik? “It is already clear that construction at Helguvik will be delayed as loans to Century Aluminium, the owners of Helguvik, have been delayed because of the crash of the Icelandic banks. This means that it is also clear that there will be delays to the construction of Hverahlidavirkjun,” said Hjalmarsson. “But it is not clear to OR how long the delay to Helguvik will be.”

Expansion of the nearby Hellisheidi geothermal power plant is scheduled to go ahead next year as planned, but will be financed by a 5 billion Icelandic kronur (43.5 million dollars) bond issue within Iceland, as the promised overseas loan funding is unavailable at present.

Another development that may be postponed is an increase in power supply to the Rio Tinto Alcan aluminium smelter in Straumsvik, near Reykjavik. A 75 MW increase and use of new technology would raise capacity from 180,000 tonnes to 220,000 tonnes per year.

The extra electricity for this is due to come from Budarhalsvirkjun, a proposed hydroelectric power plant in South Iceland.

“The building of Budarhalsvirkjun may potentially be delayed somewhat, and it is conceivable that the timing of the power increase will change,” Olafur Teitur Gudnason, information officer for Straumsvik told IPS. “Discussions between ourselves and Landsvirkjun are ongoing and are progressing well.”

Landsvirkjun is Iceland’s national power company, and it will operate Budarhalsvirkjun. “Although funding of the plant has not been secured because of the state of the Icelandic financial market, Landsvirkjun itself has enough funds to cover the starting cost of the plant,” said Thorsteinn Hilmarsson, head of corporate communication for Landsvirkjun.

“The opening of offers into machinery and electrical equipment for the plant has been postponed from December to March, when we ought to know more about the state of the financial markets in Iceland and abroad,” Hilmarsson said.

Some people have proposed the use of Icelandic pension funds to finance the development.

Finally, although a project for a new aluminium plant to be run at Bakki, near Husavik in north Iceland, by aluminium giant Alcoa has not reached the loans stage, many of the plant’s proponents want the development hastened.

“There is a great deal of support for the plant in Husavik – 80-90 percent of the local population want it – as it would consolidate jobs in the area when jobs in the traditional areas of fisheries and agriculture are disappearing. It is not just the aluminium smelter that would create jobs, it is all the associated services as well,” says lawyer Olafur Hnefill Jonsson.

But the building of the smelter at Bakki has been delayed, although work on the environmental impact assessment will continue.