FLORENCIA, Colombia, May 14 2009 (IPS) - In the midst of civil war and repression in San Vicente del Caguán, a municipality in southern Colombia, local communities and activists continue to hold forums to draw attention to human rights abuses. What keeps them going? 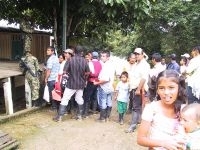 The same answer came, separately, from two local community leaders: “Because there are only three possibilities – either we are ‘disappeared’ or killed, as is happening now. Or they throw us in jail, like they have already done.”

Prison could be the fate of 96 local activists and community leaders from Caguán, because of a military intelligence report accusing them of working for the guerrillas, which was leaked a few days ago.

“Or, finally, you guys learn to respect us.” As he says this, addressing an army officer, a smile appears on the friendly face of Feliciano Sánchez, who in 2004 was forced to flee his home in Peñas Coloradas, a village on the Caguán river in the southern province of Caquetá.

Next to him, 58-year-old José Yezid Doncel, whose name is on the military intelligence report list of 96 people, nods his head.

Sánchez and Doncel discovered that they had also given the exact same answer when, in different places but during the same period, army officers asked them why they persisted in “making problems” for themselves, organising forums and humanitarian missions to collect and disseminate the accounts of victims of abuses in this war-torn area.

“Ninety percent of people between the ages of 14 and 90 (in Cartagena del Chairá) are members” of Asojuntas, says Doncel, the group’s president. The 25,000 members of the group are organised in 187 Community Action Councils (JACs), one in each neighbourhood, village or rural hamlet in this municipality that covers 13,600 square kilometres north of Florencia, the provincial capital.

In municipalities like Caguán and Cartagena del Chairá, the JACs, which are recognised by law nationwide, have taken on roles that are normally played by the authorities, organising schools, building or repairing roads and bridges, generating sources of income, settling disputes, and other important tasks in this area, where the state is largely absent.

The FARC still has a strong presence in rural areas of central, southern and southwestern provinces like Caquetá, Guaviare, Meta, Putumayo and Nariño.

On this occasion, Asojuntas joined with the non-governmental Corporación por la Defensa de los Derechos Humanos Caguán Vive, a local human rights group, and other organisations, to hold the “first provincial citizen hearing for the truth” in Caquetá, which met Saturday in Florencia.

Its founder, Joel Pérez, was forcibly disappeared on Mar. 8, 2008. His tortured and burnt body turned up in December: his legs had been broken and he had been stabbed, shot twice in the head and decapitated before his corpse was set on fire. The still smoldering corpse was found a few kilometres from San Vicente del Caguán, along the road that links the city with the neighbouring town of Puerto Rico – a stretch of road that has 15 military checkpoints.

Because of the slow pace taken by the authorities, Pérez’s remains are still buried in an unidentified grave in the cemetery in the city of San Vicente del Caguán, where he was town councilor. He was also chairman of the Vegas-Bajo Pato JAC, founder and president of the Bajo Pato Environmental Association, and member of the Municipal Committee of Stockbreeders.

In 10 hearings held in different parts of Colombia since December 2006, MOVICE has helped disseminate the testimony of 1,000 victims of abuses by government forces in this country’s long-running armed conflict.

MOVICE says it is promoting the hearings because it is “confident that the direct participation of the victims will translate into an essential element for the identification of the material and intellectual authors of crimes of the state.”

According to the rules governing the hearings, when victims or survivors take the stand to talk about what happened to them or their loved ones, it is forbidden to take photographs and all cameras must be turned off, with the exception of one that records the entire hearing, whose material is handed to a parliamentary commission.

Later, a few legislators, up to now exclusively opposition lawmakers, take charge of the process of filing complaints with the attorney-general’s office, or take the cases to the Procuraduría General (office of the inspector general).

Few victims dare to speak out in public. At the hearing in Florencia, 23 people give their accounts, several of them speaking through tears. But at the same time, 62 additional complaints are documented outside of the auditorium at the Universidad de la Amazonia, the university where the hearing was held.

Those who took down the complaints spent an average of 45 minutes speaking with the injured parties.

“The important thing is not to just go through the motions of collecting information,” Óscar Gómez, with the AVRE Corporation, a human rights group that provides mental health support to the victims before and during the hearing and later provides follow-up care, tells IPS.

AVRE has supported MOVICE in the last four hearings, so that each hearing can be “a protective setting for the victim,” enabling them to feel safe enough to speak out, and – the most important aspect – helping the victim to take a step beyond tears, and to demand justice, says Gómez.

The Florencia hearing gives an idea of how the Colombian conflict has affected several generations. One elderly woman who lost her mother in the period known as “La Violencia”, in the late 1940s and the 1950s, is here to report the murder of her son.

The Revolutionary Armed Forces of Colombia (FARC), the main rebel group, which was founded in 1964, is a product of that period of violence. The village of El Pato, near the city of San Vicente del Caguán, was one of the group’s birthplaces. The same year, the smaller National Liberation Army (ELN) emerged, inspired by the Cuban revolution.

This hot, humid, fertile land, much of which is still covered by jungle, at the northwestern tip of the Amazon, is a place of breathtaking beauty.

But that is not what Caguán is known for around the world.

For three years, this area was the site of peace talks between the government of Andrés Pastrana (1998-2002) and the FARC.

For the talks, Pastrana demilitarised an area of 42,000 square kilometres around Caguán.

Some say the FARC took advantage of that to build up its strength, while others point out that the government was simultaneously negotiating U.S. intervention in the conflict.

Plan Colombia, a counter-insurgency strategy designed, financed and advised by Washington, began to be implemented in Putumayo, a province to the south of Caquetá, in 2000. One of the main aims was to eradicate coca crops by aerial spraying and other means, based on the principle that draining the “water” – civilians who coexist with the guerrillas in these remote, neglected rural regions – will kill the “fish” – the rebels.

The United States has channeled more than five billion dollars in military and counter-narcotics aid into Plan Colombia since 2000.

Last week, U.S. President Barack Obama expressed an interest in continuing Plan Colombia, proposing 268 million dollars in military and police assistance for 2010, according to Adam Isacson with the Washington-based Centre for International Policy.

The military aid component of Plan Colombia has gradually shrunk, according to the strategy set in place by the government of Obama’s predecessor, George W. Bush (2001-2009).

In late February 2002, Brazil’s satellite system for monitoring forest fires in the Amazon detected hundreds of tiny red points throughout Caquetá, and several large red spots to the west of where the peace talks with the FARC were held.

The images were picking up the massive bombing campaign that began immediately after the breakdown of the talks in Caguán – marking Plan Colombia’s arrival to Caquetá.

The aerial bombing was followed by the arrival of the army’s 12th brigade, based in Florencia under the command of Guillermo Quiñónez, who later became army chief of staff.

Quiñónez was promoted to general a month before he was suddenly forced into retirement on Dec. 20, 2008, in the midst of heavy international pressure to clarify and crack down on numerous army killings of civilians around the country, whose bodies were presented as those of guerrillas killed in combat.

After the “softening up” practiced by Quiñónez – as he glowingly described his work to the Bogotá daily El Tiempo – and after heavy aerial spraying of coca crops with a powerful mix of glyphosate, an herbicide, special army forces arrived in the area.

In April 2003, the FARC revealed the start of Plan Patriot, a vast U.S.-financed military offensive whose name was later changed to Plan Consolidation.

According to the Corporación por la Defensa de los Derechos Humanos Caguán Vive, a total of 35,000 troops have been posted to Caquetá and the neighbouring province of Guaviare.

In the meantime, the guerrillas hinder or prohibit access by medical missions to Caguán, not to mention the numerous attacks on and threats against politicians opposed to the insurgents’ plans and strategies, in other parts of Caquetá.

After 1980, the coca boom brought hefty profits and swarms of fortune-seekers to this region. But when the repression began, many people fled.

Of the 450,000 people living in Caquetá in 2000, 145,600 – 32 percent – have been displaced from their homes – “equivalent to nearly the entire population of Chairá or San Vicente del Caguán,” said Communist Party Senator Gloria Inés Ramírez, who sits on the Senate Peace Commission.

Ramírez was the only lawmaker present at the “first provincial citizen hearing for the truth” in Florencia.

Participants in the hearing said the army subjects the local population to economic and health blockades, rationing the entrance of food and medical supplies.

The military also carries out broad, arbitrary arrests, handcuffing men and women in front of their children, said Nubia Perdomo, president of the local Merchants Association of Remolino del Caguán, who was rounded up in that town along with 24 other people on May 11, 2008.

One after another, trembling and sometimes weeping women take the stand to talk about the execution of their sons, whose bodies were later presented by the army as supposed guerrillas killed in combat.

The delegates of the Bajo and Medio Caguán (the lower and middle parts of the municipality) who came to the hearing, including Doncel and Sánchez of Asojuntas, successfully pressed the provincial legislature this week to schedule a Jun. 18 debate on human rights in the area. All of the social organisations active in Caquetá will take part in the debate, IPS was told.

In addition, Senator Ramírez promised to call a parliamentary debate to demand that the authorities in question be held accountable for both their actions and their failure to act in the region.