CAPE TOWN, May 14 2009 (IPS) - Migrant farm workers in South Africa are entitled to the same workplace rights as any other employee. But the reality across the country suggests the opposite. 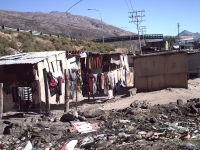 Underpayment, long working hours, poor living conditions and xenophobia are some of the daily challenges migrants endure. However most suffer in silence for fear of losing employment or being deported. Most workers who spoke to IPS are illegal immigrants, a situation farmers take advantage of to exploit them.

"The majority know their rights but the main thing is fear of expulsion from work," said Chamu Mpofu, a twenty-five year old Zimbabwean working at the farm.

"The fact of the matter is that the Employment Equity Act says no person may discriminate against a worker based on ethnic or social origin," said Ivan Polson, an inspector with the provincial labour department. "The fact that they are Zimbabweans does not take away any of their rights."

But Philani Zamuchiya, of the Institute for Poverty, Land and Agrarian Studies (PLAAS) a respected research and teaching centre at the University of the Western Cape, has researched conditions of employment for Zimbabweans in South African farms. He says generally poor working conditions on farms are worse for migrants, who will accept almost any job opportunity out of desperation.

"The situation for Zimbabwean workers is dire. Although South African labour laws protect them, commercial farmers continue flouting the regulations because they already have a pool of workers waiting to take up employment," he noted. "Although minimum salaries are around 1,253 rand ($153) a month, most farmers are paying their workers a mere 250 rand ($30)," Zamuchiya said.

Privilege Dube has worked on South African farms since 2002, and has nothing much to show for seven years in the fields. "Life is hard. A season is six to seven months, and we have got no food to eat and no houses to stay when it’s off-season time."

Dube was among some two hundred Zimbabweans working in the De Doorns farming community, 100 kilometres north of Cape Town, who gathered to hear about labour protection from officials of the South African Labour department on Mar. 9.

"We believe that it’s a real opportunity for Zimbabweans to get involved, not only to stand for their rights as labourers but also standing up for their human rights," Hanekom said.

Around De Doorns, problems worsen during the off-season for work in the vineyards. The five-month lean period is the most difficult for farm workers who struggle to meet basic necessities, let alone send money to their families back in Zimbabwe.

Constant threats and taunts by locals is another reality the foreign workers live with. The Zimbabweans allege that xenophobic tendencies are still much alive, despite a cessation of violent attacks that broke out a year ago. Tension is compounded by competition for meagre resources in this farming community.

"They call us names and threaten to beat us. We live in fear because we never know what will happen next," said Kudakwashe Moyo, who lives in a wooden shack on a farm compound.

Xenophobia broke into nationwide violence that left more than sixty people dead in South Africa in May and June 2008. Most incidents were recorded in poor communities linked to what analysts say was a result of desperation due to poor service delivery.

Moyo and his fellow migrant labourers largely rely on erratic contract jobs during the off-season. "We get as little as 20 cents for pruning a tree, how can one survive with that kind of money?"

However, lack of adequate information about their rights has contributed to the plight of most immigrants. The government’s Unemployment Insurance Fund (UIF) assists workers when they are out of employment. So during off-season period, farm labourers are entitled to unemployment insurance – the taxes are deducted from their wages, as they are from any other worker.

Another worker, Vusisizwe Mafu, said, "We did not know how to get our money. We were given a wrong impression that one needs to be a South African to access it."

However, collecting UIF or exercising other labour rights does face a major hurdle in terms formal employment contracts; most of the farm workers at the De Doorns meeting said they have no written contracts.

Also in attendance was the Confederation of South African Trade Unions (COSATU). The labour federation said it will work closely with the labour department to address problems in the migrant community. Mike Louw, COSATU coordinator in the Western Cape province urged the new government to support worker rights initiatives.

"We think that they [government leaders] are serious, but the resources are not necessarily being put in place. We will continue to agitate to make government will put resources in place that ordinary workers enjoy their rights," said Louw.

Louw said COSATU – through its member union Food and Allied Workers Union (FAWU) – will soon embark on educational programmes on farms around the country.