TLALPUJAHUA, Mexico, Jul 24 2009 (IPS) - Mariana Rangel is filled with nostalgia as she gazes at the abandoned installations of the Dos Estrellas mine, where she worked as a secretary for six years. “Those were years of prosperity; this is all there is left,” she tells IPS, pointing to what used to be the local hospital. 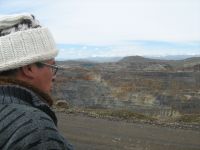 The old mining town of Tlalpujahua, a picturesque colonial hill town 160 km from the Mexican capital, is a symbol of the illusory wealth and very real damages of mining in this country. Between 1905 and 1913 it was one of the world’s biggest producers of gold, but the mine was closed down by the government in 1959 on the grounds that it was unprofitable.

In one eight-year period, 45,000 kg of gold and 400,000 kg of silver were extracted from the mine, owned at the time by wealthy Belgian adventurer François Joseph Fournier, using the most advanced techniques of the time.

A century after the heyday of this town of 8,000 people, open pit mining is at the centre of heated controversy, due to the meager benefits it brings local communities, and even governments, which are left to deal with the mines’ legacy of pollution.

Non-governmental organisations around the world declared a Global Day of Action Against Open-Pit Mining on Wednesday, Jul. 22.

The highest profile case in Mexico is the decade-long fight by the Pro San Luis Ecológico environmental movement against the Minera San Xavier, the Canadian-owned mining company that runs the Cerro San Pedro gold and silver mine in the central state of San Luis Potosí.

The movement of environmentalists and local residents accuses the company, which was sold last year by Metallica Resources Inc. to another Canadian firm, New Gold, of polluting the underground aquifers with the cyanide used to extract gold and silver from the ore, using excessive amounts of water, and operating in an environmentally protected area.

Mining has played a key role in the history of this area. Local residents are not opposed to underground mining, which has been practiced here for centuries. But they are against open cast mining, which consists of digging an enormous crater in the mountain, hundreds of metres deep, by removing millions of tons of rock that is treated with a cyanide leaching process to remove the metals.

“It’s really sad that open pit mining is in vogue. Canada has realised that it can control Mexico with these investments,” lawyer Héctor Barri with the Pro San Luis Ecológico group told IPS, referring to the predominance of Canadian companies in the mining industry here.

At a global level, Canada is the leader in open cast mining, with Canadian corporations controlling 51 percent of global mining capital.

Mexico has been richer in silver than in gold. But its 23 giant mineral deposits place it among the world’s top 12 producers of at least 18 different minerals.

According to official statistics, 263 foreign mining companies are operating 677 mining projects in Mexico, 70 percent of them Canadian. There are foreign mining corporations and investments in 26 of Mexico’s 32 states, although they are largely concentrated in the northern states of Sonora, Chihuahua, Durango and Sinaloa.

Although the Pro San Luis Ecológico movement has won two legal battles against the Minera San Xavier company, it has failed to bring mining activity at the Cerro San Pedro to a halt.

The movement thus took the case to the Commission for Environmental Cooperation (CEC), created in 1994 by Canada, Mexico and the United States to address regional environmental concerns within the framework of the North American Free Trade Agreement (NAFTA).

In February 2007 the CEC, which has a citizen submissions mechanism, accepted the Pro San Luis Ecológico submission, which argued that Mexico’s Secretariat of the Environment had violated Mexico’s laws in granting the Minera San Xavier company a permit to mine gold and silver.

However, because CEC rulings are non-binding, “they are just a rap on the knuckles. The CEC does not have the authority to enforce its decisions, which are mere moral judgments,” said Barri.

But on Jul. 15, the CEC Secretariat based in the Canadian city of Montreal dealt a blow to the environmentalists when it ruled that “the development of a factual record is not warranted” and “the process regarding the Minera San Xavier submission is terminated.”

The CEC cited “the existence of pending (legal) proceedings,” the “confidentiality of ongoing proceedings” and the “lack of publicly available information”.

The Minera San Xavier obtained a permit to mine for silver and gold at the Cerro San Pedro in February 1999, despite a state government decree that declared the area an environmentally protected zone.

“The mining company should never have been given a permit in the first place; that’s where the problems started. This is a flagrant case of impunity for environmental damages,” said Barri.

The Pro San Luis Ecológico movement filed a lawsuit, and in October 2005 a federal court revoked the permit. But in April 2006, the Secretariat of the Environment issued a new environmental permit.

In May this year, a three-judge court once again ruled in favour of the environmental movement. “This is the only case of its kind in the world that has won such a clear, compelling victory in the courts while the authorities have failed to enforce the rulings,” said Barri.

On Jul. 14, the movement brought another lawsuit against the president of the Federal Tax and Administrative Justice Court, Francisco Cuevas, and Judge Alejandro Sánchez, for delay in the administration of justice and obstruction of justice. It also asked the Supreme Court to review the case.

In Peru, one of the world’s top producers of minerals, local communities have become increasingly vocal in their protests against the mining industry, some of which have been taken before international bodies given the weak response from the national authorities.

In 2003, the National Coordinating Committee of Communities Affected by Mining in Peru (CONACAMI) brought 15 cases before the Inter-American Commission on Human Rights (IACHR), alleging that the state is violating the basic rights of local communities in areas where it has granted leases to mining companies.

One of the cases involves toxic mining tailings that have harmed the environment and the health of indigenous people in San Mateo, a mountain village not far from Lima. Others involve a major mercury spill in the town of Choropampa in the northern province of Cajamarca, and the case of the Andean highlands mining town of La Oroya, considered one of the most polluted places on earth.

“The government is pushing mining as the engine of economic growth, but it is not at the same time implementing public policies to protect the population from the impacts of the mining industry. That is incredible,” lawyer Marleni Canales, who works with CONACAMI, told IPS.

The IACHR ordered the Peruvian government to take precautionary measures to protect the people of San Mateo and La Oroya.

Studies by universities and government bodies like the General Office on Environmental Health have documented high concentrations of arsenic, lead, mercury, zinc and cyanide in a tailings dump in San Mateo, at the Coricancha mine run by the Canada-based Gold Hawk Resources.

In April, CONACAMI filed a new complaint with the IACHR protesting incompliance with its ruling and asking that the case be referred to the Inter-American Court of Human Rights. The IACHR has until September to reach a decision, said Canales.

In La Oroya, researchers from the St. Louis University School of Public Health in the U.S. state of Missouri and the Health Ministry have found high levels of toxic substances like lead, cadmium, arsenic, mercury, antimony, caesium and thallium in a majority of the children studied.

The metals smelter operated in La Oroya by the U.S. mining and metallurgical company Doe Run processes minerals from 30 mining companies in central and southern Peru, most of which operate open pit mines.

The Missouri-based Doe Run is now seeking yet another extension of the deadline for the government-mandated environmental cleanup projects to which it committed itself in 1997, when it obtained the concession for the smelter in La Oroya.

A request has been made to the IACHR for the case to be referred to the Inter-American Court.

“All domestic legal avenues have been exhausted. Despite all of our demands and legal action, effective measures have not been taken. The only alternative left to the people is to bring pressure to bear from outside the country, because there is more interest in these issues now in the international system,” economist José de Echave, head of the mining and communities programme at CooperAcción, a local social development organisation, told IPS.

The Peruvian government can fine mining companies up to 600 “unidades impositivas tributarias” (income units used to calculate taxes and fees, currently worth 1,166 dollars per unit), and can charge oil companies up to 10,000 units, for causing environmental damages.

“Mexico has great mineral wealth, but it doesn’t have one ounce of memory,” Gustavo Bernal, director of the Museo Tecnológico Minero del Siglo XIX, a museum that operates at the old Dos Estrellas mine, told IPS.

“Our aim in this museum is to show people the mining industry culture and the plundering of which we have been victims for decades,” said Bernal, whose grandfather was a foreman in the mine and was born in Tlalpujahua, which means “land of spongy earth” in the Nahuatl language.