BRAZZAVILLE, Dec 29 2009 (IPS) - “But why do they kill gorillas, why do they trap them and put them in cages? One day, if i’m president, i’ll stop all those who kill gorillas, chimpanzees and bonobos,” says 11-year-old Judicaëlle, a student at the Holy Sprit of Moungali School in Brazzaville. 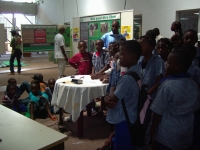 Children at a workshop explaining the importance of protecting gorillas. Credit: EDIC

This course on gorilla protection is being put on by non-governmental organisations in this central African country that is home to an important population of gorillas.

“We are teaching these things to children because they are the ones who will be in charge of humanity tomorrow. They must become aware of these questions now,” says Virgile Safoula, one of the course leaders and executive secretary of Environnement développement des initiatives communautaires (EDIC), an environmental NGO based in Brazzaville, the Congolese capital.

“We have to begin at the roots. We can’t let parents impose on their children a different idea, that accepts the capture or eating of gorillas. Besides, all children who attend the course are very interested,” says Laurent Loufoua, another course leader from the Association for the Protection of Primates in Congo.

In every corner of the room there are pictures of gorillas and posters which forbid harmful actions on encountering these animals. The children listen to stories of the forest, with puppets giving their voice to frogs and tigers who tell of the suffering of gorillas. At the end, the children are asked about what they have seen and heard.

“Here we have a child threatened by a gorilla. That means to say that the gorilla is not a pet, it’s not a domestic animal,” says one of the children, Safoula, in front of a portrait of one of the threatened apes.

A tenth of the Congo Basin’s rainforest is found in Congo-Brazzaville shelters 10 percent of the forests of the Congo Basin. The basin’s forests are second in size only to the Amazon forest of South America, and it is here in the Congolese forests, that you find the great apes: the gorilla and the chimpanzee. The third great ape, the bonobo, is found only in the mountains in the east of Congo’s neighbour, the Democratic Republic of Congo.

But NGOs and forest rangers report massacres of these primates by poachers and by communities living near protected areas who hunt them for food.

To put an end to this, the Congolese government adopted a new law on wildlife and protected areas in November 2008. “If people commit these infractions, it’s because they don’t know the law. Through a special programme, we will sensitise people to this law. Step by step, we will get to the point where most people will no longer kill gorillas,” says Safoula.

At the same time, Congo is developing a project of reintroducing gorillas at a sanctuary at Lésio-Louna, 170 kilometres north of Brazzaville. In this 170,000 hectare reserve, there are a hundred gorillas. Launched in 1994, the Gorilla Protection Project (its French acronym is PPG) is financed by a British John Aspinall Foundation.

Some of these gorillas were rescued from poachers. Many of them, rescued very young, do not survive their release. “A third, around sixty, have succeeded in surviving after we reintroduced them to the wild,” explained Luc Mathot, PPG coordinator.

The Aspinall Foundation has run a similar project in neighbouring Gabon since 1990. The two countries between them had a population of Western lowland gorillas estimated at more than a 100,000, before the appearance of the Ebola virus which affects all primates. The number is far lower today, says Mathot, without being able to provide an exact figure for the decline.

For Roch Euloge N’zobo, from the Congolese Observatory for Human Rights, the protection of gorillas must go hand in hand with the protection of people’s rights. “Often, conservationists forget that on the edges of forest reserves, there are people. They chase them out, they forbid them to touch animals to make a living. One must take people’s needs into account,” he said.

Jacques Ibara, a member of the NGO Environment Protection, feels that gorillas have been on the path towards extinction not simply due to being hunted, but also because of exploitation of forests. “The destruction of forests is also a factor. This destroys gorilla habitat so they can no longer reproduce, forced to spend all their time in flight,” he said.

But, underlines Loufoua, “the continued survival of gorillas on the ground shows that the lessons are being learned, not just by children, but also by their parents who live near forest reserves. Not long ago, it was easy to find baby gorillas in the streets of our cities, but today everyone is afraid to do that. The government is cracking down.”

In the airports, the railway stations and on the roads, in schools and markets, the authorities have put up posters announcing penalties of five years in prison and $10,000 fines against those who are caught with a a gorilla.