BERLIN, Jan 17 2010 (IPS) - At first glance, the Riswick farm is just another modern agricultural facility: in the middle of broad cultivated fields stand recently built barns, similar to so many other farms across Europe. 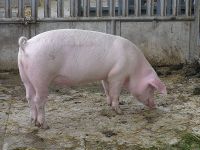 But Riswick is a model experimental farm in the small town of Kleve, located 460 kilometres southwest of Berlin and a few kilometres from Germany’s border with the Netherlands. The agricultural department of the University of Bonn is in charge of running it.

Riswick this year will become the first German research centre to study methane emissions from cattle, which are a major source of the greenhouse-effect gases that cause global warming.

The purpose of the research project, which will begin in June 2010, is “to demonstrate, in conditions similar to real life situations, how the cow metabolism produces methane and other gases,” Johannes Frizen, president of the agricultural chamber of the state of North Rhine-Westphalia, where both the farm and the University of Bonn are situated.

The bovine metabolism is a natural system of biogas production. During the digestion of forage, which takes place under anaerobic conditions – that is, without oxygen – the animals secrete microorganisms that break down the food. This process generates several gases, including methane.

Cows belch approximately every 40 seconds and can emit up to 230 litres of methane per day.

“With respect to gases that warm the atmosphere, methane is more important than carbon dioxide (CO2),” Wolfgang Buescher, professor of animal sciences at the University of Bonn and director of the Riswick project, told Tierramérica.

Scientists estimate that methane has a potential for atmospheric warming 23 times greater than that of CO2. In Germany, according to official figures, the digestive processes of four million dairy cows in 2007 generated about 450,000 tonnes of methane, or 2.1 percent of the country’s total greenhouse gas emissions.

On the Riswick farm, 144 cows will live in strictly controlled conditions. “We are going to be exact in weighing and analysing the feed and in using photo-analysis to measure their emissions,” Buescher said.

The emissions will be channelled to three different chambers: one for methane, one for ammonia and one for carbon dioxide.

According to a study by the United Nations Food and Agriculture Organisation (FAO), livestock operations are responsible for 18 percent of all greenhouse gas emissions resulting from human activities, even surpassing transportation.

These emissions, says FAO, are the sum of the environmental costs – which also include deforestation, overuse of chemical fertilisers and pesticides, among other problems – incurred by raising animals for human consumption.

FAO’s 2006 study “Livestock’s Long Shadow: Environmental Issues and Options” estimated that the meat industry would more than double its production, from 229 million tonnes annually in 1999/2001 to 465 million tonnes in 2050.

For example, cows that eat maize instead of grass emit less methane. Other ideas applied in laboratory conditions have included adding fish oil and garlic oil to cattle feed.

“We estimate that by changing the diet we can reduce emissions by up to 40 percent,” Buescher said.

According to the plans, the cows at Riswick will be raised under otherwise normal conditions. “We aren’t going to use gas masks to filter the belches, nor are we going to attach a vacuum to the cow’s behind,” he joked.

Another livestock emissions research farm, but this time dedicated to recycling the metabolic waste of pigs, is being built in Denmark.

Gottlan Paludan, the lead architect in the construction of the “City of Pigs”, says the purpose is “to analyse the synergies of large-scale livestock raising and the production of tomatoes, in order to take advantage, in a reciprocal way, of the waste that each process produces.”

The site of the pig farm, on the Jutland Peninsula, allows the filtration and absorption of CO2, ammonia and other gases. The manure will be reused to generate biogas, which in turn will produce electricity. The manure will also be recycled to remove water and produce natural fertilisers.

The electricity, water and fertilisers will be used to grow tomatoes, which will take place in a two-storey greenhouse.

Paludan hopes the greenhouse at the City of Pigs not only will recycle gases and other waste, but will also reduce the stench that usually accompanies pig farming.

“We also hope to generate a surplus of electricity and heat that can be consumed by the neighbouring communities,” he said.