UXBRIDGE, Canada, Feb 22 2010 (IPS) - The mighty mountains of hazardous electronic waste are growing by about 40 million tonnes a year globally. In China, India and South Africa, those mountains are expected to grow 200 to 500 percent in the next decade, a new report warns. 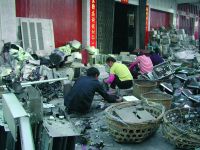 And that’s just from domestic sales of TVs, computers and cell phones. The figure doesn’t include millions of tonnes of e-waste that is exported, mostly illegally, into these countries.

Sales of electronic consumer goods are skyrocketing in emerging economies, but that is not matched by capabilities to properly collect and recycle such products, which contain both toxic and valuable materials, says the United Nations report, “Recycling – from E-Waste to Resources”.

It was released in Bali, Indonesia Monday at a meeting of the Basel Convention on the Control of Transboundary Movements of Hazardous Wastes and Their Disposal.

China already produces about 2.3 million tonnes domestically, according to a 2010 estimate, second only to the United States with about 3.0 million tonnes. And, despite having banned e-waste imports, China remains a major e-waste dumping ground for developed countries.

“This report gives new urgency to establishing ambitious, formal and regulated processes for collecting and managing e-waste via the setting up of large, efficient facilities in China,” said U.N. Under-Secretary-General Achim Steiner, the executive director of the U.N. Environment Programme, in Bali.

“China is not alone in facing a serious challenge. India, Brazil, Mexico and others may also face rising environmental damage and health problems if e-waste recycling is left to the vagaries of the informal sector,” Steiner said in a statement.

It is not that manual dismantling of electronics isn’t needed – in fact, it is essential for many products, says Ruediger Kuehr of the United Nations University (UNU) and executive secretary of the Solving the E-Waste Problem (StEP) Initiative, a consortium of NGOs, industry, and governments.

Manual disassembly needs to be done properly and under the right environmental conditions, Kueher told IPS from his office in Hamburg, Germany.

“Recycling electronics is very complex. A mobile phone will be made up of 40 to 60 different elements,” Kuehr said.

Gold is one of those valuable elements, but the informal recycling commonly done in China and India nets only 20 percent of that gold. In total, gold worth hundreds of millions of dollars in mobile phones alone is never recovered, he says. That figure quickly climbs into the billions of dollars of valuable metals that are not recovered when all products with a plug or battery are considered.

Mining and refining new metals like silver, gold, palladium, copper and indium and others have major environmental impacts, including considerable emissions of greenhouse gases, the report notes. And some materials are becoming scarce and therefore far more expensive.

Developing vibrant national recycling schemes is complex and simply financing and transferring high-tech equipment from developed countries is unlikely to work, according to the report.

It says China’s lack of a comprehensive e-waste collection network, combined with competition from the lower-cost informal sector, has held back state-of-the-art e-waste recycling plants.

The sophisticated materials recovery facilities in Europe and North America that can recover nearly all the valuable metals are expensive to build and require a large volume of e-waste to be profitable. That’s an opportunity to reverse the supply chain, with developing countries dismantling electronics and sending the materials for final recycling and recovery in the developed world, Kuehr says.

“Recovering a rare and valuable element like iridium is a very costly and technically difficult process. The developing world will never have enough resources to build all their own facilities. A global solution is needed,” he said.

There are lots impediments to setting up such a global system, including the fact that some sectors in some countries are making very good money with the existing inefficient system, Kuehr noted. Proper material classification – is a non-working computer e-waste or could it be easily repaired for reuse? – and a globally-agreed permit system are also major obstacles.

Other problems include mistrust about the claims of recyclers, lack of certification of recyclers and ensuring that countries that dismantle products benefit from sending such materials back to OECD (Organisation for Economic Cooperation and Development) countries for final recovery, he said.

“We do need a global system, but we do not have an end solution about how to do this yet,” Kuehr said.

Ultimately, global society needs to shift to dematerialization, where reuse completely dominates recycling. Recycling is energy and resource intensive, even if it is not polluting, he says.

People who buy computers or phones really want computing and communication services, not physical products. The way forward is for companies to own the products that provide those services and then upgrade those products over and over to close the loop – not unlike a bottle-deposit system.

“This makes so much more sense in many respects,” concluded Kuehr.