GUATEMALA CITY, Jul 28 2010 (IPS) - “Three-quarters of the fields are still under water. Maize, plantains, okra and pasture are all lost,” José Asencio told IPS at the village of Santa Ana Mixtán in southern Guatemala, the area worst affected by tropical storm Agatha. 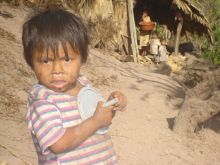 The villagers have been working for food in order to survive. “We’ve been shoring up the banks of the Coyolate and Mascalate rivers, and the mayor has been giving us food rations, although we haven’t received any for the past two weeks because supplies have run out,” he said.

Asencio said that food shortages and unemployment, caused by the extreme weather and the floods, have worsened the plight of the 373 families in the village, which is part of the municipality of Nueva Concepción in the department (province) of Escuintla, in the far south of the country.

The same dramatic situation is seen in Madronales, a village in the coastal municipality of Ocós in the southwestern province of San Marcos. “The fields sown with maize and plantain are flooded; we need food aid,” community leader Amparo Barrios told IPS.

Tropical storm Agatha flooded the crops that are the mainstay of 210 families, and “the little that was spared was destroyed by Atlantic storm Alex,” which hit the country a month later, she complained.

Agatha departed from Guatemala May 30, leaving behind 165 people dead and over 100,000 affected by destruction of their homes, crops or livelihoods. One month later, Alex added two more to the death toll and 2,000 to the number of material victims, according to the National Disaster Reduction Coordination agency (CONRED).

The storms also hit El Salvador and Honduras, where at least 29 people died and thousands were left homeless, according to disaster relief agencies.

But the worst hit by the double whammy of the storms was Guatemala, one of the poorest countries in Latin America, where half the population live on incomes below the poverty line and 17 percent are extremely poor, according to United Nations statistics.

“Climate change is exacerbating the conditions of poverty and extreme poverty in the country, and above all is complicating the lives of the most vulnerable,” Carlos Mancilla, head of the Climate Change Unit at the Environment and Natural Resources Ministry (MARN), told IPS.

Flooding is not the only concern. Paradoxically, one of the main chronic problems in Guatemala is drought, in the “dry corridor” in the north and east of the country.

“Adapting to drought is not as easy as coping with floods. How can the social fabric destroyed by a drought be repaired? What happens when the head of a family has to migrate? In contrast, if a bridge is washed away by the rains, it can simply be rebuilt,” Mancilla said.

The General Directorate of Epidemiology reported that at least 54 children died of hunger in 2009 because of the drought, which was described as the worst in 30 years. Meanwhile, 2.5 million people went hungry due to the food crisis, the U.N. reported.

Just under 50 percent of children in Guatemala are malnourished, the highest rate in Latin America and one of the highest in the world, according to the United Nations Children’s Fund (UNICEF).

But in Mancilla’s view, adaptation to climate change must be broader in scope than just dealing with the food crisis, because inappropriate location of human settlements and the construction methods used compound the risks.

In addition to its economic vulnerability, Guatemala has unstable geology, with a high risk of disasters from volcanic activity, geological faults and its many mountains and rivers.

For example, the Pacaya volcano, 30 kilometres from the capital, erupted May 27 and rained ash over Guatemala City, killing one person and affecting thousands of others.

Among the government measures taken to adapt to the climate emergencies, Mancilla mentioned the creation of an inter-institutional Climate Change Commission, made up of 17 secretariats and ministries, that is “assessing the impact, including on food production, within the different sectors.” In this way “we examine how each one can contribute” to overcoming the challenge, he said.

Sucely Girón, coordinator of the non-governmental Observatory on the Right to Food Security (ODSAN), told IPS that the country “is not investing in prevention,” in spite of having passed a law on food and nutrition security.

“The main thrust of the reconstruction budget is replacing infrastructure. They forget that Agatha and Alex left people with no crops and no jobs that would enable them to buy food,” she said, referring to the announcement by the government of social democratic President Álvaro Colom that it needs one billion dollars to reconstruct the country.

Girón said that crop diversification and alternative economic activities need to be promoted, in order to reduce Guatemala’s dependence on agriculture.

She mentioned tourism, fish farming and craft making as possible ways of earning incomes for families whose crops have suffered from climate change impacts.

The programme on Strengthening Environmental Governance in the face of Climate Change Risks in Guatemala, an initiative of government and non-governmental organisations, community organisations and international aid agencies, aims at sustainable agriculture.

Leonel Jacinto, coordinator within the project for the Food and Agriculture Organisation (FAO), told IPS that food security for the population is being sought through agricultural best practices.

In the central province of Baja Verapaz, affected by drought, the programme encourages avoidance of slash-and-burn techniques, and promotes agroforestry (combining trees and shrubs with crops and/or livestock) and preserving and making use of stubble, in order to improve water retention in the soil.

The project, which is to benefit 791 families directly and another 100,000 families indirectly, promotes the recycling of water used for washing clothes to irrigate vegetable plots. It also encourages energy generation in biodigesters, which produce biogas from organic waste materials.

Jacinto said programmes like this one can change the face of agriculture in Guatemala and make it more resistant to climate change. But it needs to be extended across the country and to be sustained over time, he stressed.