RIGHTS-PERU: No Reparations Yet for Families of Civil War Victims

HUAMANGA, Peru, Jul 26 2010 (IPS) - The families of victims of the political violence in the impoverished southern highlands province of Ayacucho, the epicentre of Peru’s 1980-2000 counterinsurgency war, complain that the government of Alan García has set new conditions for the start of the payment of reparations. 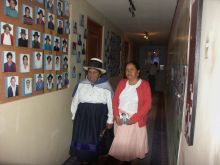 Angélica Mendoza and Adelina García of ANFASEP, in the Museum of Memory, Ayacucho. Credit: Elías Navarro/IPS

“The government has not had the political will to comply with the payment of individual reparations, even though a law providing for such payments has been in effect for five years,” Adelina García, president of the National Association of Families of the Kidnapped, Detained and Disappeared of Peru (ANFASEP), told IPS.

“While the government dithers in living up to the law, the oldest members of ANFASEP have started to die off without receiving a single cent of what they have a right to,” said García, whose husband Zósimo Tenorio has been missing since Dec. 1, 1983, when an army commando dragged him from their home.

“Since I became president of the organisation in 2009, 10 of the women have died,” she said, pointing out that nearly 10,000 of the people registered to receive compensation from the government are over 60.

A total of 76,000 relatives of victims of the counterinsurgency war are registered to receive damages from the government Reparations Council, which runs the Victims Registry.

Thirty-five percent of those who were directly affected by the civil war and 43 percent of the families who lost one of their members to the armed conflict were from Ayacucho, where the Maoist Shining Path guerrillas launched their struggle in May 1980.

A study published in February by scholar Vicky Rojas on ANFASEP’s 520 members found that 83 percent are over 55, 64 percent are women from families that have fallen apart, and 67 percent have received no psychological assistance to help them overcome the impact of the violence and the loss of their loved ones.

More than 800 survivors of the political violence from 14 of the country’s 25 regions gathered in Lima this month to demand that the government live up to the legislation that created the Integral Reparations Plan, signed into law in July 2005 by then President Alejandro Toledo (2001-2006).

After meeting with the leaders of the organisations of victims’ families, Prime Minister Javier Velásquez announced on Jul. 18 that a commission would be set up to determine the specific amount of reparations. He also said that payment of damages would begin in 2011, from a 7.1 million dollar fund.

But the next day, President García announced a decree modifying the Integral Reparations Plan, which was received with concern by the future beneficiaries.

García said the payment of reparations would begin when the registry was closed, but he did not specify a date. He also said the payments would be made only if public funds were available to that end.

“These modifications are obstacles for making the payments in the shortest possible time,” Filemón Salvatierra, head of the Regional Coordinating Committee of Those Affected by Political Violence (CORAVIP), an umbrella organisation of 87 different groups, told IPS.

Salvatierra, who took part in the meeting with the prime minister, added that “the government has forgotten that most of the victims’ relatives are illiterate Quechua-speaking campesinos, people who live in extreme poverty and are unaware of their rights.”

The death toll for Peru’s two decade armed conflict was put at 70,000 by the independent Truth and Reconciliation Commission. But in order to qualify for the reparations provided for by law, victims’ families must prove that their loved ones were murdered by the guerrillas, the army or paramilitary groups.

Angélica Mendoza is one of the thousands of Peruvians fighting for reparations and for the truth about what happened to their loved ones. Her son Arquímedes Ascarza was taken away from the family home by the army late one night in 1983. A beating was the only thing she achieved in her attempt to keep the soldiers from seizing her son.

She immediately began her ceaseless rounds of police stations and military posts, where she met with a wall of denial that Ascarza was being held prisoner. But a scrap of paper was finally smuggled out to her from the Los Cabitos military base.

The message dated Jul. 15, 1983 and signed by her son said: “Mamá, please get a lawyer and find a way for me to be brought before the court, because my situation is very complicated.”

That was the last Mendoza, who is now 80 years old, heard of her son. The year he disappeared she and a group of other mothers founded ANFASEP. A Museum of Memory, where Ascarza’s smuggled-out letter is on display, has been built at the association’s offices in Huamanga, a city in Ayacucho.

“On Oct. 18, 2005, when Alan García was candidate for president, he called for me and promised that the members of the military responsible for the crimes would be punished, and that reparations would be paid to the families,” Mendoza remarked to IPS. “But no one has yet received a thing.”

On Apr. 3, 1983, a Shining Path column descended on the village of Incarajay in Ayacucho and killed several people, including Víctor Roca and his wife Julia Sulca. The rebels also kidnapped their two-year-old daughter Elinda.

The couple’s other child, Daniel Roca, is now the head of the National Coordinating Committee of Those Affected by the Political Violence (CONAVIP). He is staying in Lima to make sure that the commission promised by Prime Minister Velásquez, which is to determine the amount of reparations to be paid, is set up.

“The government wants to start paying the reparations only after the Victims Registry is closed,” he said. “But what if new victims are discovered down the line; what will happen to them?

“The Victims Registry has to stay open,” Roca argued. “Besides, a 180-day time frame has been set up for the commission to present its report. That is too long.”

Roca also complained that as things now stand, the victims’ relatives would receive less than 100 dollars in compensation.