GONAIVES, Sep 20 2010 (IPS) - “I’m going to do everything possible to raise my daughter. My daughter is my future. And I can see my future in her,” says Mirlene Saint Juste, a rice merchant in the Opoto market of Gonaives in northern Haiti. 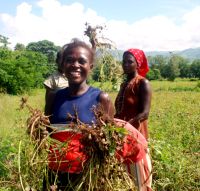 Haitian women like Saint Juste who work as street vendors are widely viewed as one of the country’s main economic engines. Their loud sales pitch on busy market days has earned them the affectionate nickname “Madame Sara”, after a type of yellow bird in the countryside that loves to sing.

Cetoute Sadila, now middle-aged, has worked since she was 15 at the Lester market in the valley of Artibonite, Haiti’s largest department.

“I have been selling rice here since I was little girl,” she says. “I used to sell a medium-sized can of rice for 30 gourdes (74 cents). Now, I have to sell it for 105 gourdes (about 2.60 U.S. dollars) because the fertiliser is very expensive.” Still, Sadila said she is able to send her children to school and university.

Not all are so lucky. While Artibonite, and its capital, Gonaives, were largely spared by the devastating Jan. 12 earthquake, Port-au-Prince and its surrounds suffered colossal damage.

The slow pace of recovery has pushed women who were already on the brink of destitution over the edge.

Rosemene Mondesir is a single mother of seven children who has lived in a displaced persons camp for the last eight months. “I have always been the mother and father of my children – before and after the earthquake,” she says. “I need assistance to feed and send them to school.”

The filthy, ramshackle camp is situated about a 40-minute drive north of Port-au-Prince. Residents have dubbed it “the desert of Canaan” because there are so few trees and no potable water. The area used to be a dumpsite for the victims of death squads, particularly following the first coup against former President Jean-Bertrand Aristide in 1991.

But in Haiti, women are always well-organised, whether in the marketplace or the camps. As the dust from the quake settled, they have joined hands to combat rapists and opportunistic thieves.

Stephanie Henry, a 28-year-old civil engineer, is the leader of Ann Kore Yo/Let’s Support Them, a grassroots women’s group based in Cersal camp in the Delmas district. “A group of women and I decided to found this organisation to help other young women,” she told IPS. “The young are more vulnerable.”

“Some of them lost their parents in the earthquake. They have to sell their bodies to get some money to live. It is very sad,” Henry says.

Teen pregnancy is also much more visible than before the earthquake. Dr. Magalita Lajoie, a general practitioner who specialises in community health, told IPS, “I was working in a camp where I registered six cases of 13-year-old girls who became pregnant after Jan. 12.”

“Rape is a big problem in the camps,” she said. “We have trainings for 14-year-old girls living in the camps we work at. We teach them what to do in case someone rapes them. We also teach them how to protect themselves from getting pregnant. In turn, they teach the other girls.”

Those who work with women in the camps say that the authorities are often indifferent to crimes against women and rapists are rarely brought to justice.

“The Haitian government and MINUSTAH [the U.N. peacekeeping force] have to take responsibility to provide security for the camps. They have to protect the women and children from being abused or raped by the predators,” said Mario Joseph, a lead attorney with the Bureaux des Avocats Internationaux (BAI), at a press conference last month with Blaine Bookey, a U.S. lawyer working with the Institute for Justice and Democracy in Haiti (IJDH).

A report published in July by human rights groups including Madre, IJDH and BAI called “Our Bodies Are Still Trembling: Haitian Women’s Fight against Rape” detailed ongoing sexual violence in the camps and criticised the Haitian president and U.N. mission in Haiti for not providing security or electricity.

Komisyon Fanm Viktim Pou Viktim, or KOFAVIV/Committee of Women Victims for Victims, has worked with survivors of sexual violence since 2004. In a report published Jul. 18, KOFAVIV contradicted U.N. claims that security has been provided in problem areas. “People living in many camps are forced to provide their own security, with little resources, through informal security patrols or ‘brigades’,” the group said.

In the first two months after the earthquake, KOFAVIV tracked 230 incidents of rape in just 15 camps in Port‐au‐ Prince.

While the government and the international community work on a reconstruction plan, many feel that the immediate problems facing Haitian women have slipped under the radar – even though they must play a key role in putting Haiti back on its feet.

Besides personal safety issues, there are no child support laws to protect single mothers, who comprise the majority of homeless seen on the street.

Marie Benjami, a mother of three, is among the more fortunate ones. She has a job at the Zanmi Agrikol farm, a project of Zanmi Lasante/Partners in Health, located in Bas- Plateau Central.

“I have been working with Zanmi Agrikol/Friends of Agriculture for two years. I can only help my children by coming here. If I didn’t work here, I don’t know what I would do to support them,” she said.

This Nov. 28, Haitians will head to the polls to choose a new president, 10 senators and 99 members of parliament. Fanmi Lavalas, widely seen as the most popular political party in the country, has again been excluded from the election on technical grounds.

But women may still have something to cheer about. Despite their many hardships and a culture of discrimination, at least two – Mirland H. Manigat and Claire-Lydie Parent – have registered to run for president.